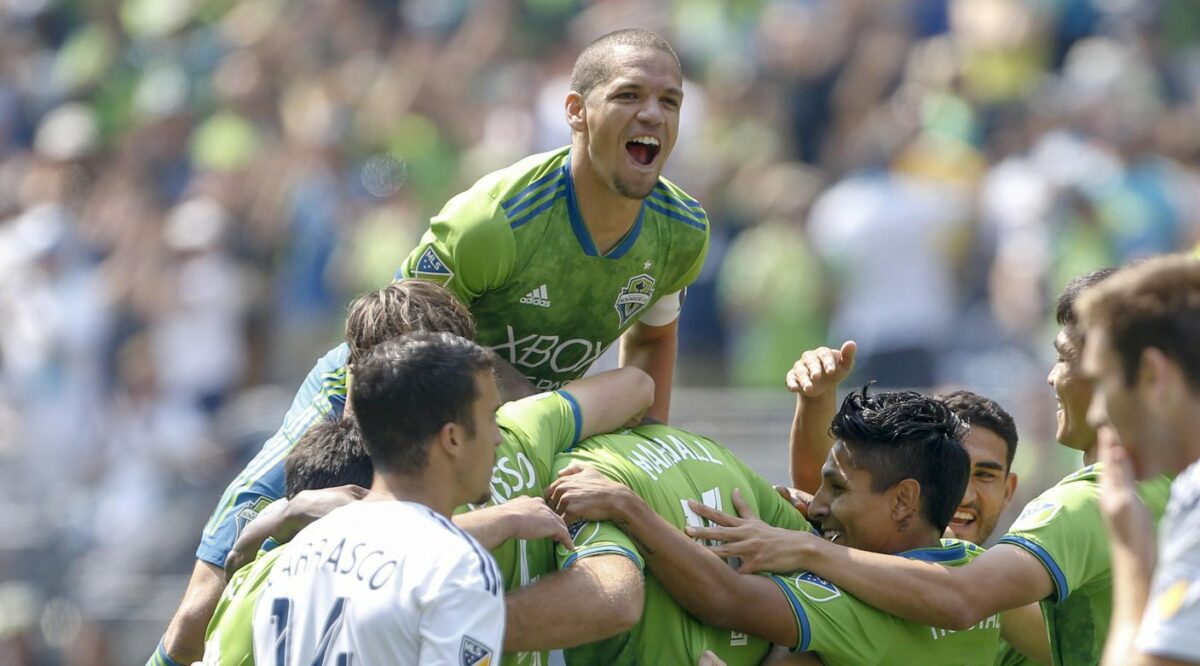 Don’t look now but the Seattle Sounders are surging towards the playoff places in the Western Conference.

The Sounders pushed their league-best winning streak to six matches on Saturday after pummeling the LA Galaxy, 5-0, at CenturyLink Field.

Seattle’s big win kicked off a busy Saturday of MLS action. a day that saw the Philadelphia Union beat New York City FC and Sporting Kansas City manhandle the Portland Timbers in some of the bigger results.

Chad Marshall opened the scoring for the hosts in just the third minute, latching onto a Nicolas Lodeiro cross and heading past goalkeeper David Bingham for the early 1-0 lead. It was the third goal of the season for Marshall and the eighth assist of the campaign for Lodeiro.

Harry Shipp doubled the lead in the 18th minute off an Ashley Cole turnover. Gustav Svensson intercepted a weak clearance from Cole and found Shipp alone inside the penalty arc. The fifth-year midfielder easily slotted past Bingham from just outside the penalty spot for the 2-0 lead.

Former Sounder Servando Carrasco put his side down 3-0 shortly after halftime with an ugly own goal, deflecting a Lodeiro cross directly into his own net in the 50th minute.

Cristian Roldan made it 4-0 in the 59th minute, finding himself unmarked in the heart of the penalty area and sending a first-timed shot past Bingham.

Midsummer signing Raul Ruidiaz scored his second goal in a Sounders uniform in the 67th minute, intercepting a Carrasco pass, charging into the penalty area, and muscling off defender Jorgen Skjelvik before slipping a left-footed shot into the far-side netting for the 5-0 lead.

Man of the Match: Nicolas Lodeiro. Team-leading eighth assist, and once again the man at the heart of everything the Sounders did.

Moment of the Match: The 50th-minute own goal erased any chance the visitors had of getting back into the game.

Match to Forget: Servando Carrasco. An own goal and a turnover that directly led to another goal.

The Union broke the scoreless deadlock in the 57th minute. Borek Dockal created it with a nice through ball to Cory Burke, who took one step and curled a right-footed effort past Sean Johnson.

The Union doubled their lead in the 77th minute through substitute Ilsinho. The Brazilian danced his way into the box and slotted a left-footed effort into the bottom left corner.

Man of the Match: Borek Dockal assisted on both of the Union’s goals and continues to be a consistent performer for Jim Curtin’s side.

Moment of the Match: Burke’s opener really opened the door for Philly who looked the livelier of the two sides in the second half.

Match to Forget: David Villa was very quiet for NYCFC, being subbed off early in the second half. The Spaniard rarely was an option offensively in the loss

Red Bulls attacking midfielder Danny Royer opened the scoring in the 5th minute when he tapped in a delightful cross from Bradley Wright-Phillips that froze Vancouver keeper Stefan Marinovic in place.  Red Bulls’ number 99 had been released down the right flank through a trying pass from Tyler Adams, and had plenty of space to find his teammate at the back post. The goal was Royer’s ninth of the season.

Vancouver answered back through Kendall Waston in the 42nd minute.  The towering 6’5” centre-back out jumped his former partner in defense Tim Parker to meet a corner delivered by Yordy Reyna.  Waston’s goal levelled the score at 1-1 heading into halftime.

Captain Waston led by example again when he netted his second of the game in the 60th minute.  Despite ex-Whitecap Tim Parker marking the Costa Rican even closer on yet another corner, the imperious Vancouver skipper triumphed over Parker a second time.  Throughout the match Waston’s physicality and strength seemed to get the better of Parker, who typically dominates in that side of the game.
Danny Royer capped off his impressive performance with a clutch 90th minute goal to level things at 2-2.  A set piece was involved yet again, as Tyler Adam’s deep pass to Royer found the winger unmarked at the back post.
Moment of the Match: Royer’s dramatic final minute equalizer has to be the moment of the match, as his heroic finish secured an important point for the Red Bulls.
Man of the Match: Tyler Adams.  The 19-year-old was popping up everywhere throughout the match.  Adams also played a key part in both Red Bulls goals, releasing the assister Bradley Wright-Phillips in the first and assisting the second.
Match to Forget: Red Bulls right-back Michael Murillo nearly ruined his side’s ability to level the score when he was sent off in the 84th minute.  Luckily for him Danny Royer came to his rescue just minutes later, equalizing the match at 2-2 with a crucial finish off of a Tyler Adams free kick

The Impact boosted their playoff prospects, while the Fire’s nightmare season only got worse after a late winner gave Montreal all three points in their Eastern Conference clash.

Daniel Lovitz volleyed home a long-range winner to help the Impact snap a four-match winless slide. The defeat pushed Chicago’s losing streak to eight matches, and leaves the Fire in last place in the East.

A penalty for the Impact was called four minutes into the game. Bastian Schweinsteiger made contact with Saphir Taider on the left side of the box. Ignacio Piatti converted from the spot to give his team the early lead.

The Fire managed to find an equalizer at the 70th minute. Heading a cross straight to Evan Bush, Nemanja Nikolic grabbed his own rebound to net his 11th goal of the season.

That was before Lovitz’s stunner sent the Fire home with zero points.

Man of the Match: At left back, Daniel Lovitz held his fort and gave his team all three points in a six-point game against the Fire. In stoppage time, Lovitz found his first goal of the season keeping the Impact in the playoff race.

Moment of the Match: Standing outside the box on a corner kick situation, Daniel Lovitz located the ball being headed away by the Fire defense. The Pennsylvania native took the ball on the volley and beat Richard Sanchez with his first goal of the season.

Match to Forget: Bastian Schweinsteiger had a very difficult game playing centerback in Montreal. The former German international looked lost at that position and the experiment ended at the 60th minute.

Nasty thunderstorms in the Dallas area delayed the start of the match by more than two hours. Once the match began, FC Dallas took control.

Facing a shorthanded Minnesota United side playing without, among others, Darwin Quintero, FC Dallas cruised to victory.

Maynor Figueroa pounced on a loose ball just before halftime to give FC Dallas the lead at the break. Michael Barrios provided the insurance goal in the 57th minute with a curling right-footed shot from 18 yards out.

The Loons managed just one shot on goal to FC Dallas’ eight, and struggled to win the battle in midfield, where Carlos Gruezo and Victor Ulloa controlled the flow of play.

Moment of the Match: Michael Barrios’ goal was well struck and put the match out of reach.

After Sporting KC dominated the first 25 minutes, Diego Rubio finally opens the scoring for SKC from outside the box as he slid his shot just inside the left post to give KC the 1-0 lead.

Diego Rubio doubled Sporting KC’s lead in the 37th minute as he found himself wide open in the box after Daniel Salloi’s cross. Rubio calmly slotted the ball into the lower right hand corner of the net to give SKC the 2-0 lead.

Sporting KC piled on late in 87th minute as Johnny Russell played a gorgeous give-and-go with Krisztian Nemeth in the box. The Scottish forward took Nemeth’s return ball and easily sent it past Attinella to give SKC the 3-0 lead.

Man of the Match: Diego Rubio has been on fire since Sporting KC brought back Krisztian Nemeth, and the Chilean striker continued his hot streak with a brace. It wasn’t just his two goals that made the striker stand out. His off-the-ball runs, passing, and defensive work rate all earned him MOTM honors.

Moment of the Match: Matt Besler stepped in front of a Portland pass on SKC’s own 18-yard line and played a beautiful give-and-go with Felipe Gutierrez. As Besler continued up the field, he saw Daniel Salloi make a run down the left side of the pitch and played a lovely long ball to the Hungarian. Salloi gathered the ball, saw Rubio make a run to the spot, sent the cross in, and Rubio calmly gathered the ball and put in into the net for SKC’s second goal of the night.

Match to Forget: Timbers centerback Larrys Mabiala had a forgettable 45 minutes, leading Giovani Savarese to replace him at halftime.

The Dynamo looked on their way to a home victory when second-half stoppage time began, but by the time the final whistle blew at BBVA Compass Stadium, it was Real Salt Lake escaping with a victory.

The victory propelled RSL into fourth place in the Western Conference, while the defeat pushed Houston’s winless skid to seven matches.

A deflected volley from Oscar Boniek Garcia gave the Dynamo a 36th-minute lead.

Man of the Match: Albert Rusnak delivered both goals to lead RSL to victory.

Second-half substitute Chris Wondolowski made TFC goalkeeper Alex Bono pay for a blunder, and helped the Earthquakes equalize in the process.

Wondolowski sent a seemingly harmless shot at Bono, who proceeded to spill the save in front of him, where Wondolowski continues his run and pounced for a goal that moved him to within four of Landon Donovan on the all-time MLS scoring list.

TFC substitutes Sebastian Giovinco and Gregory Van Der Wiel combined on a sequence that led to a Lucas Janson finish in the 59th minute.

The Earthquakes dominated play in the first half, out-shooting TFC 9-1, but have no goals to show for that dominance as the two sides were even at the break.

Man of the Match: Chris Wondolowski provided a spark off the bench, helping the Earthquakes earn a draw.

Moment of the Match: Toronto FC’s goal, scored by Lucas Janson, was a perfect example of sharp passing and finishing.

Match to Forget: Alex Bono’s spilled save gave Wondolowski an easy equalizer, and cost TFC to precious points in the process.