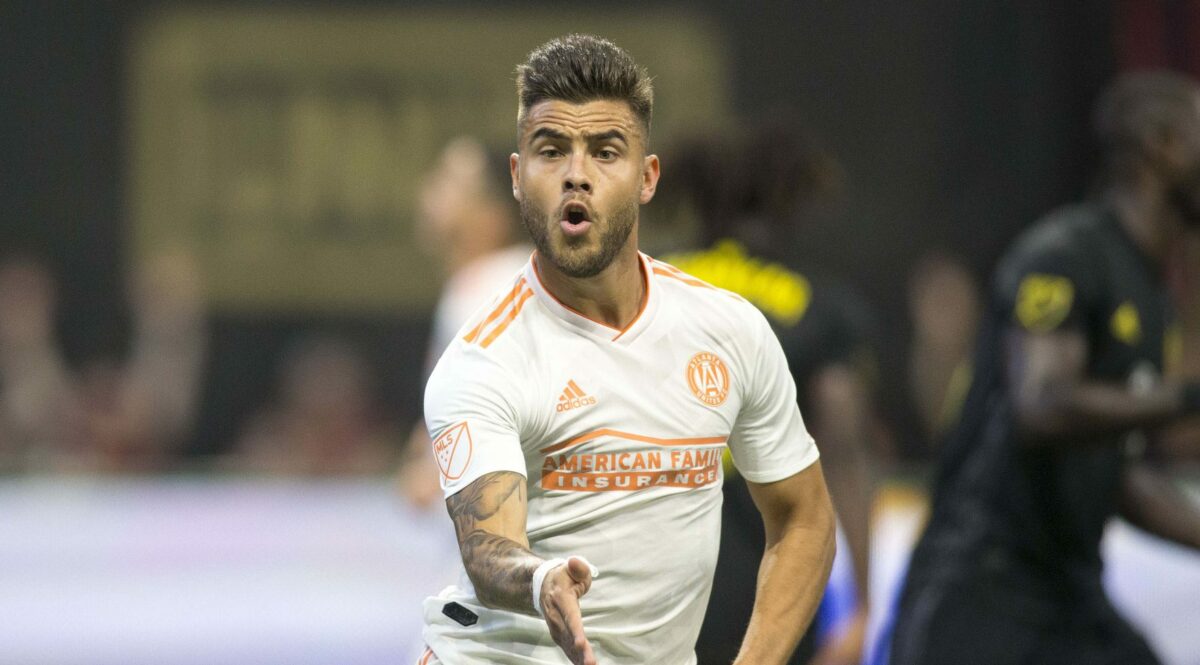 Martinez scored his MLS record-tying 27th goal, and added an assist, to help Atlanta United edge the Columbus Crew and move back into the lead in the Supporters’ Shield race.

D.C. United moved a step closer to playoff position after winning its fourth game in five matches with an important win against New England.

LAFC and the Colorado Rapids capped Sunday’s action with a late clash at Banc of California Stadium.

Here is a closer look at Sunday’s action:

Atlanta United regained first place in the East from the New York Red Bulls behind goals from a trio of its attacking stars.

Josef Martinez tied the MLS single-season scoring record in the 31st minute, as he eluded a few defenders to beat Zack Steffen from the top of the penalty area.

Julian Gressel intercepted the ball at midfield and played in the Venezuelan, who tied Roy Lassiter, Chris Wondolowski and Bradley Wright-Phillips with 27 goals in a single season.

Gyasi Zardes leveled the contest five minutes into the second half, as he rocketed a shot past Brad Guzan from 20 yards.

Hector Villalba put the Five Stripes back into the lead in the 76th minute, as he burst down the right wing into the penalty area and finished into the bottom-right side of the net after he cruised to his left.

Martinez had an opportunity to break the record in the 82nd minute, but he opted to leave the ball at the foot of Miguel Almiron, who curled a finish into the left part of the net.

Man of the Match: Josef Martinez produced a goal and an assist during a match in which wrote himself into the MLS record book.

Moment of the Match: Villalba’s magnificent individual effort put Tata Martino’s side back ahead and it allowed the home side to cruise to the finish.

Match to Forget: Pedro Santos failed to make a significant impact on the wing for the Crew, especially after Zardes equalized.

After a physical first 10 minutes, D.C. United opened the scoring through the red-hot Luciano Acosta.

The 24-year-old Argentine tapped in a cross from Paul Arriola, who had broken into the penalty area after dribbling past New England left back Brandon Bye.

Zoltán Stieber closed the door on any possible Revolution comeback when he doubled his side’s advantage in the 89th minute. A lofted ball from Júnior Moreno found the cutting Stieber, who took advantage of a sleeping New England backline to put himself one-on-one with keeper Matt Turner. Stieber calmly slotted the ball past Turner for the goal.

Man of the Match: Before being subbed off in the 60th minute, D.C. winger Paul Arriola was a constant threat on the right wing. Arriola’s ability to regularly take advantage of the inexperienced Brandon Bye launched numerous attacks for his side, namely the first goal on which he assisted.

Moment of the Match: D.C.’s quick restart off the free kick in the 13th minute set up the scoring opportunity, but it was Paul Arriola’s ability to create his own space deep in New England territory that allowed him to send in the cross to Acosta for the goal.

Match to Forget: Scott Caldwell’s tendency to get stuck in got the better of him tonight, as his six fouls led to an eventual red card given in the 73rd minute. The midfielder’s sending off effectively killed his side’s chances to get back into the game.

Lee Nguyen opened the scoring for LAFC just after the start of the second half. A poor clearance from Colorado gave the ball to Nguyen in the Rapids box, and the midfielder was able to gather the ball and send it past Tim Howard for the first goal of the game.

Adama Diomande played a lovely give-and-go off a back heel flick with a streaking Diego Rossi, who forcefully put the ball in the back of the net off his right foot to double LAFC’s lead in the 80th minute.

Man of the Match: Lee Nguyen provided a spark for LAFC after the start of the second half with his interception and goal. The midfielder showed his attacking quality as he held the ball with his back to goal but was able to turn and put the ball into the back of the net for the go-ahead goal.

Moment of the Match: Diomande’s back heel give-and-go with Rossi was pure class, and it led to LAFC’s second goal of the night that secured the full three points for the home side.

Match to Forget: It was Jack Price’s poor header clearance that gave the ball away to Nguyen in the box. Price tried to make up for it by stepping up to challenge the LAFC midfielder, but Nguyen simply tapped the ball around him and made the Rapids midfielder look silly ahead of the goal.