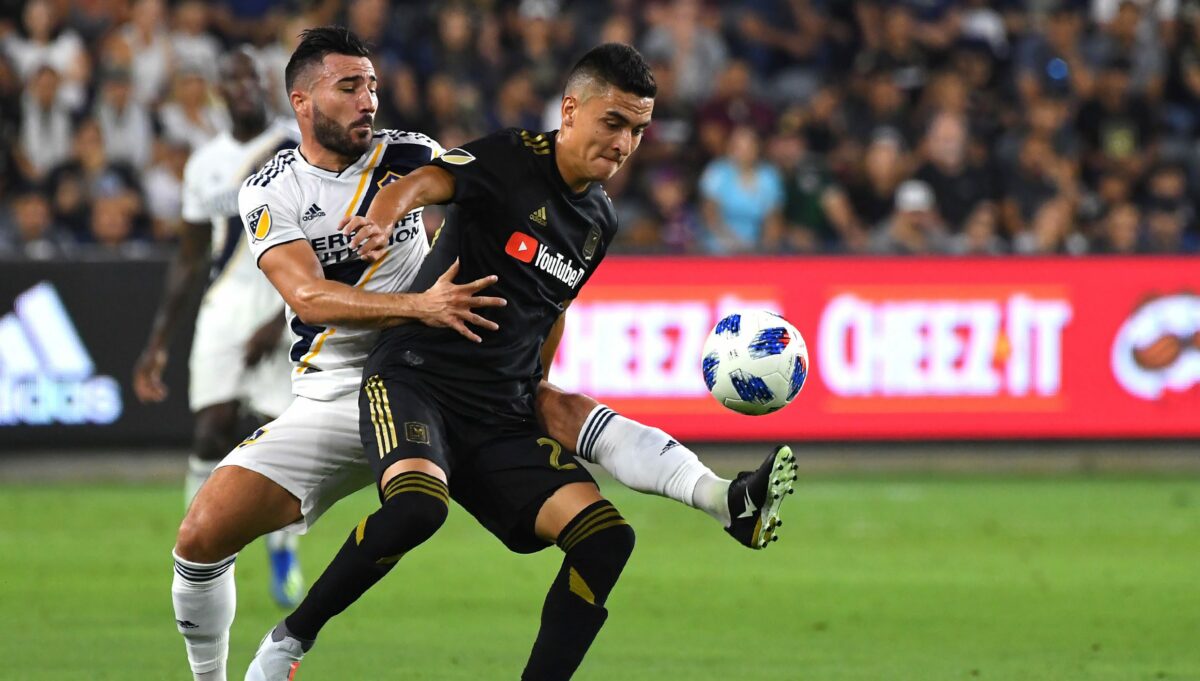 Major League Soccer’s best rivalries take center stage in Week 26, as almost every match has some type of hostile background.

The New York Red Bulls and New York City FC kicked off the festivities on Wednesday with a 1-1 draw at Yankee Stadium.

As one of the few teams in MLS with two true rivals, the Red Bulls will participate in Rivalry Week again on Sunday on their home turf.

In addition to the nationally televised games Thursday, Friday and Sunday, there are a handful of intriguing clashes on Saturday that will play a role in reshaping the playoff picture for another week.

Below is a look at the Rivalry Week games running from Thursday to Sunday.

One of the oldest rivalries in MLS enters a new chapter with Wayne Rooney leading D.C. United into Red Bull Arena on Sunday night.

The second Atlantic Cup showdown of the season features a Red Bulls side playing its third game in eight days, while the Black and Red are on the hunt for a playoff position.

Rooney will be the focal point of the Red Bulls defensive strategy, and he’ll face a tough test against the center back duo of Aaron Long and Tim Parker, who have come together well as a pairing.

Tyler Adams will also feature in a starring role, as he tries to limit the scoring opportunities of the in-form Luciano Acosta, while trying to push the Red Bulls forward from a deep midfield position.

As always, Bradley Wright-Phillips is one of the top players to watch, but if you look to the flanks, especially at Daniel Royer, that could be the X-factor for Chris Armas’ side as it looks to put more pressure on Atlanta United.

MLS’ newest rivalry hasn’t disappointed in two installments, with 11 goals scored over 180 minutes of action between LAFC and the LA Galaxy.

The Galaxy need a victory more than the expansion side on Friday night, as they’ve collected two points from four August matches.

Bob Bradley’s men enter StubHub Center for the second time this season with 180 minutes of shutout soccer under their belts.

With so many world-class attackers taking the field, it’s hard to argue against a third high-scoring El Trafico.

The biggest question mark, as it has been all season, is how well the Galaxy defense can play. If they continue with their current low standard, LAFC could score four or five goals.

Saturday’s 401 derby at BMO Field could change the complexion of the Eastern Conference playoff race.

Toronto FC is still lingering beneath the red line with an outside chance to qualify for the postseason, but the Reds are still nine points back of the Montreal Impact.

A win over Remi Garde’s side would be the perfect boost for the Reds, and their recent form indicates they are ready to at least make a charge at the red line.

The Impact are at a disadvantage in the standings since everyone around them holds games in hand, and with one win in the last five games, concern is starting to grow about missing out on the postseason.

Seattle and Portland come into their latest Cascadia Cup clash mirroring each other on the red line.

The Timbers sit in sixth place with 37 points following a recent slide that continued with a loss to Sporting Kansas City in Week 25.

The Sounders are doing what the Sounders normally do this time of year. Six straight wins pulled Brian Schmetzer’s side within striking distance of the playoff positions.

Giovanni Savarese’s men won at CenturyLink Field on June 30, and in order to pull off a result at home they’ll need to limit the connectivity between Nicolas Lodeiro and Raul Ruidiaz.

For the Sounders, the defensive strategy hasn’t changed much against the Timbers, as they need to keep Diego Valeri off the ball and negate the presence of Diego Chara in the middle of the park.

Chicago hasn’t officially added the word dumpster to its official team name, but it might be forced to if it falls to Columbus on Thursday night.

A loss would make Veljko Paunovic’s side the second MLS team to lose nine consecutive games this season, with Orlando City being the other.

As for the Crew, they continue to ignore everything going on off the field and focus on producing results.

Gregg Berhalter’s side needs a result on the road on Thursday in order to stave the incoming threats from Philadelphia and Montreal in fifth and sixth place.

FC Dallas has an opportunity to light up El Capitan and blow up Houston’s remaining playoff hopes to shreds in Thursday’s Texas derby.

Oscar Pareja’s men are clearly the better side entering the clash at BBVA Compass Stadium, as they enter with the Western Conference’s best road record at 5-4-2.

The Dynamo are halfway to becoming the third team to lose nine games in a row this season, as they’ve dropped five straight and plummeted down the West standings.

Another loss on Thursday would destroy the rest of the belief the side has and makes the September 26 U.S. Open Cup final the club’s top priority,

Atlanta United sits in pole position to claim the Supporters’ Shield, but it needs to make it through a four-game road trip starting on Friday at Orlando City Stadium.

The Lions have back-to-back home games ahead against Atlanta and Philadelphia in which they’ll try to salvage something from their disastrous season.

For the second time in three weeks, New England and Philadelphia meet with massive playoff implications on the line.

The Union won two week ago at Gillette Stadium to boost themselves into fifth place in the East.

A win over NYCFC in Week 25 solidified the Union’s playoff spot for the time being, while the Revs fell flat in D.C.

A second loss to the Union would be a crucial blow to the Revs’ playoff hopes, especially with D.C. and Toronto surging.

The midwestern matchup between Minnesota United and Sporting Kansas City has the potential to turn into a nice regional rivalry with time.

But for now, Sporting Kansas City is the dominant side and should be able to limit the big-play potential of Darwin Quintero.

With the No. 1 seed in the West in sight, Sporting KC won’t slip up at home against a Loons defense it can take full advantage of.

The improved Colorado Rapids pose a tough task for the Claret and Cobalt, especially if Kellyn Acosta clogs up the space in midfield.

Expect more of a chess match than a high-scoring affair at Dick’s Sporting Goods Park, but if RSL really is a playoff team, it’ll find a way to secure three points, just like it did in Houston in Week 25.

San Jose and Vancouver are left playing each other on Saturday because their main rivals have more important plans.

The Quakes have been thrown to the side by the Galaxy in favor of LAFC, while the Whitecaps are the odd team out in the Cascadia Cup on Rivalry Week.

Carl Robinson’s side should have a straightforward three points on its hands against the dreadful Quakes, and it’ll need every point it can get with Seattle and Portland already fighting on the red line in front of it.