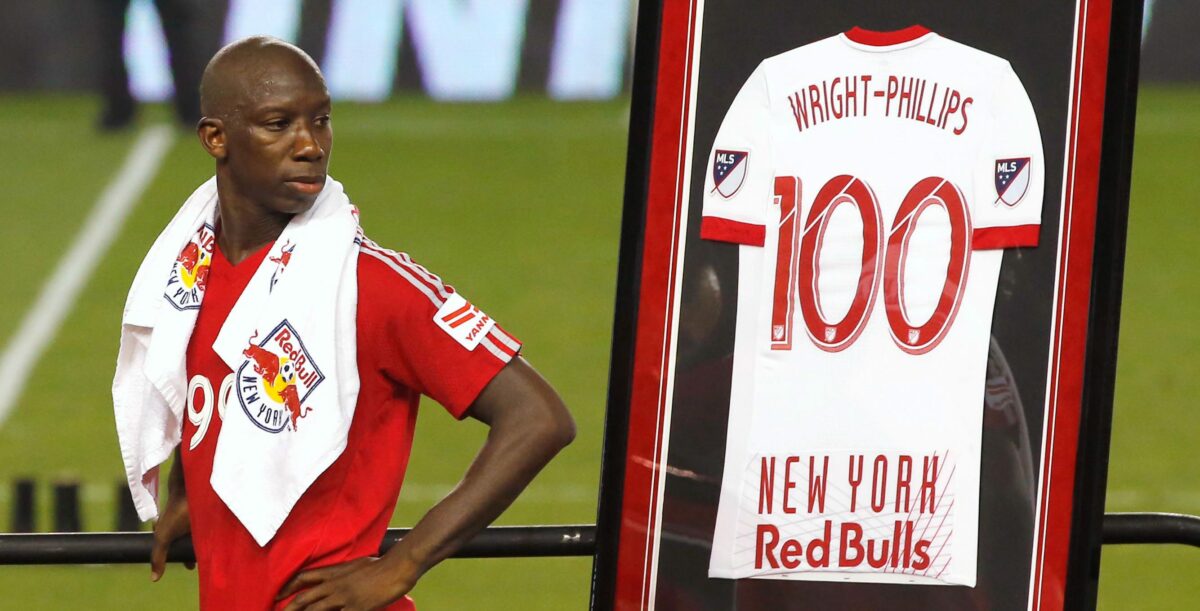 HARRISON, N.J. – The New York Red Bulls celebrated Bradley Wright-Phillips and his 100 MLS goals on Sunday night by taking a look at his past, but in doing so they opened up questions about his future.

The Red Bulls paid tribute to Wright-Phillips for his recent accomplishment of hitting the goals century mark with a ceremony at Red Bull Arena following their 2-1 win over LAFC. The celebration seemed like the ones typically thrown for the most storied of players after they retire. It included Wright-Phillips’ family standing up on stage with him, glowing speeches from club executives, a fireworks display, and a video tribute with congratulatory messages from some of Wright-Phillips’ closest loved ones, former teammates and coaches.

It also included the surprise unveiling of a No. 99 emblem in the stadium with the simultaneous announcement that Wright-Phillips’ number will never again be worn by anyone at the club after he decides to call it career. Therein lies an interesting development, though.

Wright-Phillips is 33-years old and clearly closer to the end of his playing days than he is to the beginning, but the star striker can still bag goals in bunches and his endless running on both sides of the ball indicates that he still has enough energy to play for several more years.

The Red Bulls, however, have shown a propensity in recent offseasons to do away with their veteran players in an effort get younger. Dax McCarty, Sacha Kljestan, and Felipe were all moved to make way for younger players at their respective positions.

There will come a day when Wright-Phillips is no longer able to move or play as well as he does now, and the Red Bulls will then be faced with a tough decision. Do they allow sentimental value to play a part and keep the only player whose number they have retired so that can he can call time on his career as a member of the club? Or do they make an ice-cold business decision and let the team legend go write his final chapter elsewhere?

“If it’s up to me, I’ll stay here forever,” said Wright-Phillips on Sunday when asked if he would like to retire with the Red Bulls.

If the Red Bulls ultimately end up seeing this marriage with Wright-Phillips through until the very end, the Englishman could easily transition into a post-playing career role with the club, much in the same way that former midfielder John Wolyniec or centerback Ibrahim Sekagya have. Wright-Phillips could be anything from an ambassador to a member of the front office to a coach. The possibilities are plentiful.

Wright-Phillips isn’t opposed to that eventual possibility, in fact. He feels at home in the New York/New Jersey area – his youngest daughter was born there – but he knows how the business of soccer works and that there might come a day when he is no longer revered as much as he is right now.

“Every young player, either in our academy or that comes through or first-team player, how fortunate that they can watch a guy like him,” said Red Bulls head coach Chris Armas. “I remind guys and I tell players, ‘Watch this guy. Watch how he interacts with people. Watch how he talks to Nancy, the woman who prepares our food. Watch how he deals with the bus drivers.’

Another recent example of how Wright-Phillips gets it was his now famous celebration after scoring his 100th goal, the winner in a 1-0 road victory over rivals D.C. United on July 25. As a nod to his father, Arsenal great Ian Wright-Phillips, Bradley initially thought of removing his jersey to unveil a t-shirt underneath that said, “100 for 99”. Ian had done something similar when breaking the Gunners’ scoring record decades ago, lifting his top to show off a Nike t-shirt that had the amount of goals he scored (179) and the words ‘Just Done It’.

Bradley ran the idea by assistant kit man Sean Ruiz days before the match, and the two agreed. When the game got closer, however, Ruiz pitched a different celebration. Instead of having a shirt on underneath, Wright-Phillips could wear a second jersey beneath his game-worn one that replaced the forward’s customary No. 99 with 100. Wright-Phillips was initially hesitant – ‘It’s not what I wanted.’ – but Ruiz convinced him and the striker grew to like the idea and went with it.

Keeping a star player for the long term who understands the importance of everyone’s role within the organization and exemplifies humility would make sense for the Red Bulls, but it might entail seeing Wright-Phillips have to go through a season or two, or more, in which he gets reduced to a substitute player. Father Time is undefeated, after all, and Wright-Phillips approaches it with every game no matter how much he continues to deliver or impress.

The Red Bulls may not be thinking about it just yet, but the time will come when have to cross that bridge and make a decision on Wright-Phillips. His place in the club’s history is cemented, but his long-term future is unknown.