Streaking Sounders back in playoff picture after sixth straight win 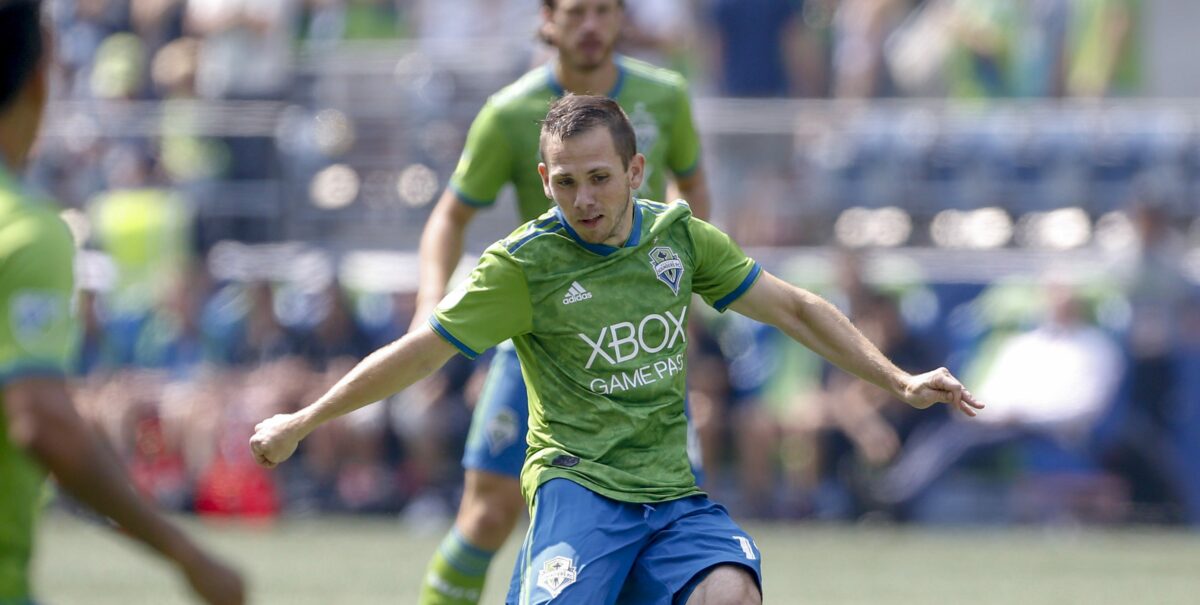 That was the Seattle Sounders head coach on June 30, following a 3-2 home loss to the club’s most hated rival, the Portland Timbers. The loss dropped the Sounders to a dismal 3-9-3 on the season, a mere point out of last place in the Western Conference.

The Sounders have not lost since, and they head down Interstate 5 next weekend with a chance to pass the Timbers for the sixth and final playoff spot in the conference.

They find themselves poised to reclaim a playoff spot courtesy of Saturday afternoon’s 5-0 dismantling of the LA Galaxy: If you were waiting for a statement win from the 2018 Sounders, you wait no more.

But 5-0? That’s a statement regardless of opponent.

“On any given day, that team that LA brought, they could’ve beat us,” said Schmetzer after Saturday’s match. “I mean, that’s the parity in MLS. So we were pleased with the result, and it just pushes us three points closer to making sure that we’re in the playoffs.”

The Sounders capitalized on mistakes, were ruthless and decisive against a routinely discombobulated defense, and generally ran the Galaxy off the pitch.

A pair of first-half goals came first from towering center back Chad Marshall and then from resurgent midfielder Harry Shipp, enjoying his finest campaign in years.

Designated Player Nicolas Lodeiro, once again relentless throughout, assisted on the first goal. Swedish international Gustav Svensson fed Shipp on the second, stepping into a pass from Galaxy defender Ashley Cole pass and finding Shipp with a beautiful first-touch pass.

“We forced a turnover,” said Shipp, “and once I saw it go to Gustav, I was just praying he’d hit it first time because I knew I was going to have some time and space. Luckily, I was able to finish it off.”

Despite the 2-0 lead, Schmetzer and his staff weren’t thrilled with the way the first half wound down.

“There were some tactical adjustments,” said Schmetzer about his half-time talk, “and then were some other, verbal adjustments as to making sure they picked up their play, because I thought they got a little complacent.”

Former Sounder Servando Carrasco deflected a Lodeiro cross into his own net just five minutes after the break, effectively putting the match to bed.

Cristian Roldan tapped in the fourth goal just shy of the hour mark after some clinical build-up play between Shipp and Lodeiro shredded the Galaxy defense and left Roldan unmarked in the heart of the area.

Raul Ruidiaz finished the scoring eight minutes later, intercepting a Carrasco pass, charging into the penalty area and fending off a defender before slipping a left-footed shot into the far-side netting. The Peruvian Designated Player has two goals and an assist in six appearances since joining the Sounders in the summer transfer window.

The Sounders (10-9-5) have now won a club-record six straight matches, and are undefeated over a nine-game stretch dating back that Timbers loss. They sit in seventh place in the Western Conference, just two points shy of the Galaxy and Timbers for a playoff spot.

“Well, I’m very proud of the entire organization, I’ll say it like that,” Schmetzer said of the winning streak. “The team in that locker room obviously put the work in. It’s been a fairly consistent group. Harry [Shipp] did great. He scored a goal, he was rewarded today. The whole group of players — and I’m not just talking about the 18 on any given Sunday, I’m talking about the whole group of 30 guys — they all put it in.”

Two months after hitting their low point against the Timbers, the Sounders find themselves again facing their Pacific Northwest neighbors — this time with a chance to get back into the playoff spots and maybe ease some of the sting from their last encounter.

“It’s just going to be an overall normal work week for us,” said Schmetzer, “but we understand the stakes are getting higher — not just because they’re our archrival, but because the season is coming to a close. So again I go back to it: every single point matters. So we’ll go down there and try and collect points. That’s what we’re gonna do.”