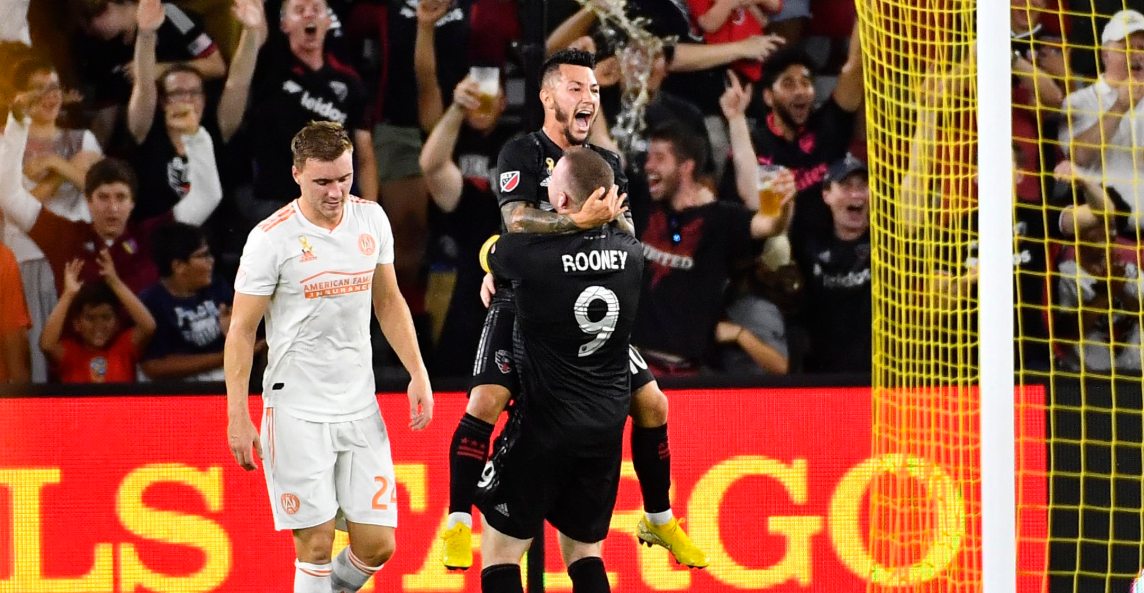 If D.C. United has any hope of making the playoffs, taking advantage of its backloaded schedule filled with home games at Audi Field is a must.

DCU took a huge step toward the postseason on Sunday night after beating Atlanta United, 3-1.

The game started slow, especially for the high-powered attack of Atlanta United. Through nearly the he first 25 minutes of the game, both teams only had one shot teach to speak of. Things finally got interesting in the 25th minute.

Atlanta United’s Ezequiel Barco almost opened the scoring after Bill Hamid missed a punch when coming out to clear a cross. The ball fell to Barco’s feet with an open net in front of him, but his shot drifted wide left and the ball bounced off the left post and away from goal.

Just three minutes later D.C. drew first blood as Bill Hamid launched a goal kick deep into Atlanta territory straight to the head of Wayne Rooney. The Englishman redirected the ball to a streaking Luciano Acosta. DCU’s No. 10 had some fancy footwork to create just enough space to get his shot off and fired the ball into the left side of the net, giving D.C. the early 1-0 lead.

Atlanta continued to press and dominate possession throughout the first half looking for an equalizer, and Jeff Larentowicz finally found goal for the Five Stripes in the 39th minute as he redirected a corner kick perfectly into the top left corner of Hamid’s goal to tie the game.

Five minutes into the second half, Ezequiel Barco erred again as he clipped Paul Arriola’s right foot in the box in the middle of the DCU forward’s shot, giving D.C. a penalty kick. VAR looked briefly at the play, but the call was upheld, and Wayne Rooney converted the penalty without issue, putting D.C. up by a goal once again.

Atlanta’s best chance at equalizing came in the 67th minute as Josef Martinez had a fantastic one on one opportunity with Bill Hamid. An errant DCU pass just seconds before gave the ball to Atlanta. Miguel Almiron gathered the ball and ran up the field along with Martinez, who received a through ball near the top of the box but sent his shot wide left of goal.

Ten minutes later, a brilliant solo effort from Luciano Acosta sealed the three points for D.C. United in the 77th minute. The forward drove down the right side of the field, made space for himself as he cut in toward the box, and sent the ball past Brad Guzan for D.C.’s third goal of the game.

D.C. United moved up to seventh place in the East after the win, just six points behind 6th place Montreal with three games in hand. Atlanta United sits in second place behind the New York Red Bulls in both the Eastern Conference and the Supporters’ Shield Race.

Man of the Match: Luciano Acosta has been in a career-best form all season long, and he continued his hot streak with two goals tonight to lead D.C. to the full three points.

Moment of the Match: Rooney’s perfect header followed by Acosta’s fancy footwork leading to D.C.’s first goal gave the home side the confidence they needed to take on Atlanta. It put the pressure on the Five Stripes early and set the pace for the rest of the game.

Match to Forget: Between missing a sitter early in the game and the clear foul leading to the decisive penalty kick, Ezequiel Barco struggled as he has done throughout 2018. The MLS record signing has just four goals and one assist on the year. That can’t be what Atlanta was hoping they’d get for $15 million.