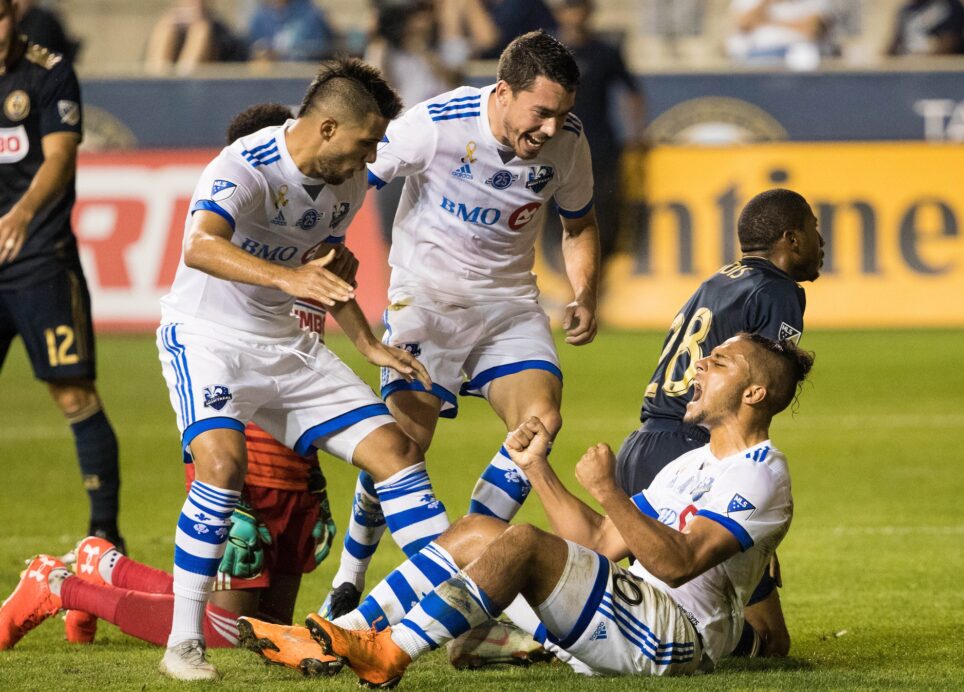 CHESTER, Pa. — Comeback victories don’t come easy in any sport, but the feeling after you earn one is something that can lead to positive results.

The Montreal Impact claimed their first come-from-behind win on Saturday, making it look easy against the very team they are chasing in the Eastern Conference standings.

Remi Garde’s side erased an early deficit and scored four unanswered goals to beat down the Philadelphia Union 4-1 at Talen Energy Stadium. It was the first time this season that the Impact claimed the full three points after going down a goal. Even more important, its come at a crucial stretch of the season where points aren’t handed to teams.

“I think we have improved a lot, especially the mentality of the group,” Garde said. “We struggled for a few months but then now we have had some new players come in and contribute to what we want to achieve.”

“Many other players have turned themselves since the start of the season. We are more solid and strong and the most important thing is to keep pushing towards the playoffs. Anytime you can get three points against a team you are fighting to jump over is huge, and we were able to achieve that tonight.”

The Impact are known for their counter-attacking ability and that was on full display after going down 1-0. Three of the Impact’s four goals came on the counter, opening the Union up on several times following a corner kick. Alejandro Silva netted his first MLS brace, Ignacio Piatti registered two assists, and Quincy Amarikwa and Saphir Taider netted important goals in their respective campaigns.

“We try every time to get better on the counter attacks and we especially knew we could get after Philadelphia tonight,” Garde said. “Being able to score four goals anywhere is going to build the confidence of the group and it couldn’t come at a better time of the season.”

“Philadelphia is a team we know that leaves a lot of space in the middle of the field so we knew if we had chances we could punish them,” Impact defender Rod Fanni said. “We used the strategy that coach wanted us to do tonight and it worked very well. Now we just have to carry this performance over to the next match.”

Piatti’s presence on the field is always going to give your team a chance at winning, and the Argentine ran the show to full extent on Saturday. With his pair of assists, the 33-year-old has eclipsed double-digits for the first time in his MLS career. His 23 points is the second-most since the 2016 campaign, the last playoff appearance for the Impact.

Despite not scoring tonight, Piatti plays a huge role for the team as a leader both on and off the field. Veteran goalkeeper Evan Bush knows the importance of Piatti’s play during these final five matches of the season.

“When you have a guy like Nacho out there, he just makes things happen,” Bush said. “He is one of the best out there at creating chances and the final goal was as textbook as you can get on his ability to set up other guys on the team.”

“He is one of the best in the league when he plays like he did tonight and with enjoyment,” Garde said. “We have some important games coming up and we have some teams trying to catch up so his play and the rest of the team’s will be huge if we want to make the playoffs.”