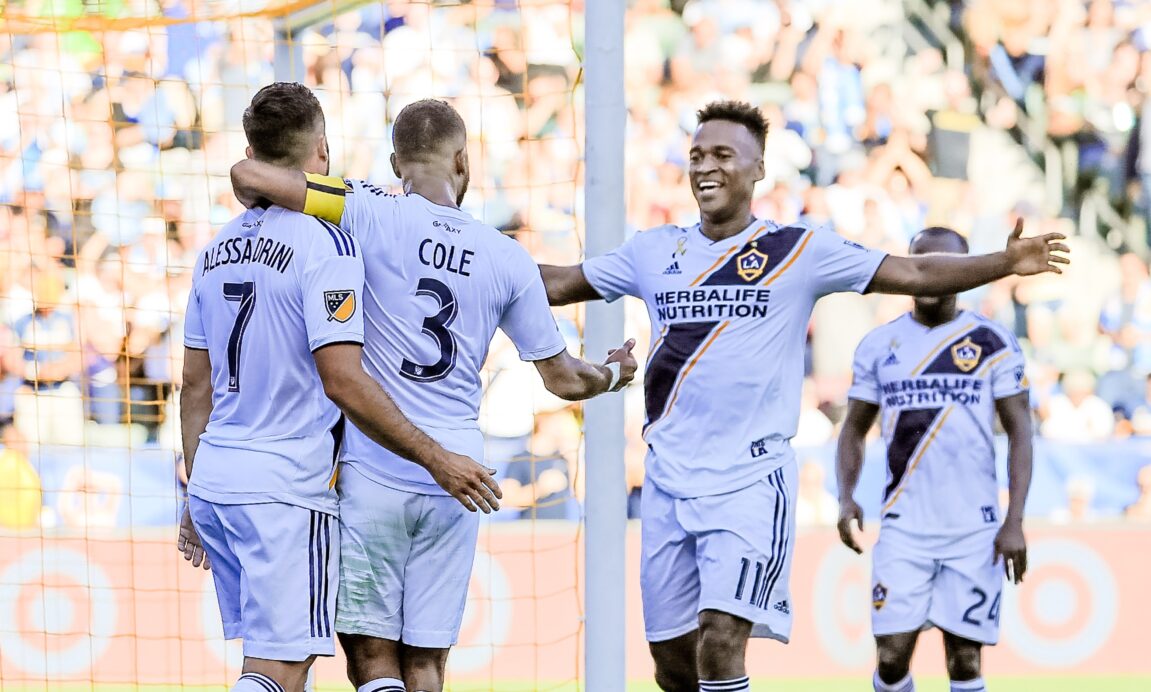 The LA Galaxy had found it tough to earn victories of late, as well as keep clean sheets. Dom Kinnear’s side exacted revenge on West rivals Seattle with a 3-0 home success on Sunday night.

Zlatan Ibrahimovic scored the winning goal for the Galaxy, while Romain Alessandrini registered a pair of assists. The Galaxy remained in the hunt for a playoff spot with the much-needed win.

Elsewhere, the Philadelphia Union shocked Sporting KC at a wet and soggy Talen Energy Stadium. FC Dallas used a last-minute winner from their captain Matt Hedges to down Vancouver at BC Place.

The Philadelphia Union risked a chance at points as they made several changes from Wednesday’s win in Seattle. However, the moves paid off big time for the Union as they downed Western Conference leaders Sporting KC at a soggy Talen Energy Stadium on Sunday.

Jay Simpson bagged a pair of second-half goals as the Union triumphed 2-0 and move to a point of fourth-place in the East.

Simpson’s right-footed volley in the 71st minute broke the deadlock after the English forward was set up by an Alejandro Bedoya headed assist. The Englishman rifled past Tim Melia, who kept Philadelphia at bay up to that point.

After important saves by Union back-up keeper John McCarthy, the Bedoya-Simpson connection worked again to seal the points. Simpson doubled his tally prior to second-half stoppage time as he finished a Bedoya assist for the second time.

McCarthy made a huge save for the Union in the 54th minute, diving to repel Felipe Gutierrez’s header out for a corner. The 26-year-old made six saves to help the Union keep their 10th clean sheet of the 2018 season.

The Union next travel to Houston midweek for the U.S. Open Cup Final before traveling to fourth place Columbus next Saturday for a huge Eastern Conference showdown.

Man of the Match: Simpson netted his first brace for the club, finishing comfortably on both of his goals.

Moment of the Match: The first goal by Simpson was set up by a great pass from Bedoya, which gave the Union a lead they truly deserved.

Match to Forget: Johnny Russell should’ve easily had a strong performance against Fabinho but the Scotsman was kept at bay.

The LA Galaxy claimed their first victory over the Seattle Sounders since 2016 on Sunday night in front of their home fans.

Zlatan Ibrahimovic continued his in-from play, breaking the deadlock in the ninth minute from the penalty spot. The Swede followed up his impressive performance last weekend with another goal back at Stubhub Center.

Alessandrini added his second assist of the match, setting up Ema Boateng for the Galaxy’s third goal of the evening after halftime.

The Galaxy also shut down the Sounders attack, holding them to one shot on goal and keeping their first clean sheet since July 7th.

Man of the Match: Zlatan Ibrahimovic scored the winning goal in the match, coming up big for the Galaxy again this season.

Moment of the Match: Kamara’s finish put the Galaxy in cruise control for the remainder of the match.

Match to Forget: The Sounders forwards were poor in the defeat, rarely posing a threat offensively against a Galaxy backline who struggled for consistency.

FC Dallas took advantage of Sporting KC’s slip-up on the road at Philadelphia to move atop the Western Conference with a last-minute winner in Canada.

Matt Hedges 87th minute header proved to be the difference as Dallas stunned the Whitecaps faithful at BC Place.

After it looked like the two sides would head into halftime tied at 0-0, Santiago Mosquera broke the deadlock in the 42nd minute. The Colombian slotted in his fifth goal of the season, and his third over his last three appearances for the club.

The hosts got even in the 66th minute with Kei Kamara again amongst the scoring. Kamara headed home Alphonso Davies cross past Jesse Gonzalez for his 13th tally of the season.

Hedges finished Michael Barrios cross into the top-left corner for his second of the goal of the season. Defensively, they held the Whitecaps to one shot on goal.

Man of the Match: Hedges came up clutch for Dallas when his team needed it most. The centerback’s header lifted Dallas to top spot in the West.

Moment of the Match: The captain’s last-minute header sealed the dramatic win for Dallas on the road.

Match to Forget: Cristian Techera was very frustrated on Sunday night, picking up a yellow card and failing to get any of his three shots on goal.