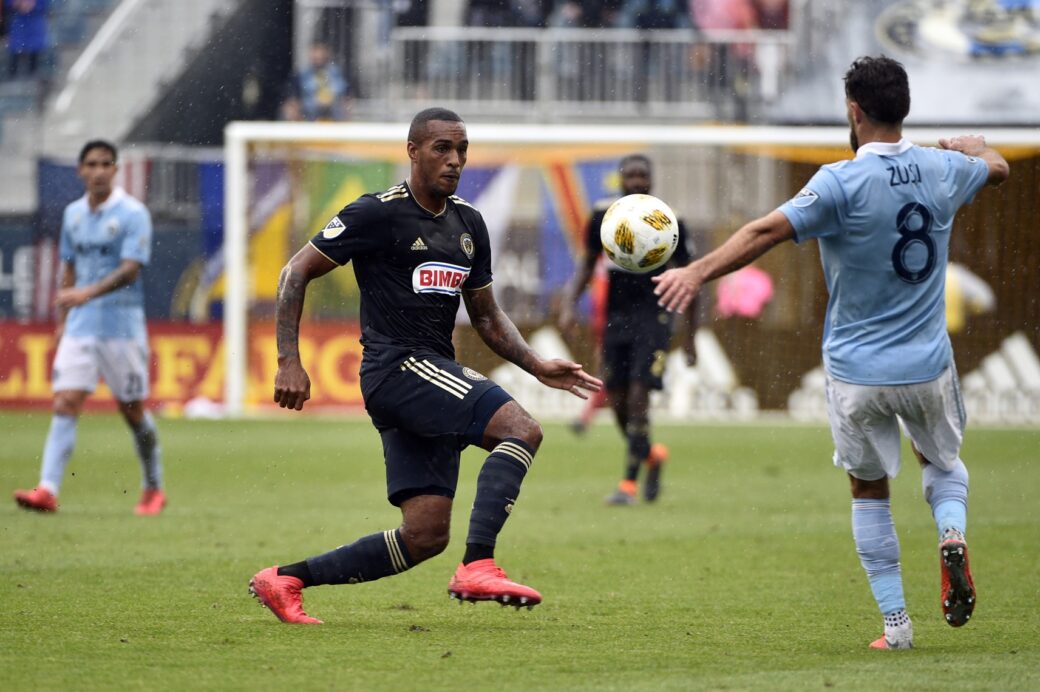 With a third U.S. Open Cup Final in five seasons looming, Jim Curtin knew the risks of playing his full squad in Sunday’s MLS showdown against Sporting Kansas City. Just four days after a big win in Seattle, the Union claimed another scalp from the Western Conference on Sunday with one key reserve player stealing the show.

Jay Simpson made his first start of the 2018 season and scored his first brace for the Union in their 2-0 shutout win over SKC at Talen Energy Stadium. The 29-year-old English forward played only 41 minutes of league action coming into Sunday’s start but showed his readiness as he propelled the Union to 46 points, their most since 2013.

“You could go through every guy, from Olivier Mbaizo to Jay Simpson to [Auston] Trusty’s performance, it shows that our group is together. It shows we’re confident, we’ve used our full squad this season in a lot of different scenario’s and ways. We had a plan, we stuck with it and the players deserve all of the credit today.”

With nine changes being made from their victory in Seattle, the Union looked to have more eyes ready for their date with Houston on Wednesday than the task at hand. However, that was not the case as Simpson and Bedoya connected on both of the Union’s goals.

It’s always going to be tough for a player to come in with limited opportunities and make an impact. Since his move to MLS from English fourth-tier side Leyton Orient in 2017, Simpson only had one league goal to his name. Despite 22 appearances last season, the forward lacked the clinical ability to etch his name into a starting role this season. It hasn’t seemed to cause any problem for Simpson, who played a role in the Union’s last two victories which now has them sitting one point off of fourth place and 11 clear of the red line.

“I’m not surprised he [Simpson] scored, he’s a great player and he scores all the time in training,” Curtin said. “He’s been increasingly sharp in the past two weeks, he’s been given an unfair criticism from our fan base and been booed by the fans in the past which is something I don’t feel he deserves.”

“He has quality, he did a great job today and has done a great job in being a true professional. Things may not have gone his way from scoring on his debut to coughing up lung and bruising a lung to then C.J. [Sapong] stepping in and scoring 16 goals last season. This year Cory has been hot when he’s stepped in, so if the fans want to boo him then boo me instead for not playing him because he’s answered the criticism greatly.”

Not many would’ve given the Union a chance with multiple backups in their starting lineup against a SKC side coming off a five-goal offensive performance. John McCarthy stepped in for an absent Andre Blake, and made six saves in a clean sheet. Olivier Mbaizo had a solid performance at right-back, while Auston Trusty and Mark McKenzie continued their impressive debut campaign together as the centerback partnership.

After this victory, the confidence is now at an all-time high for the Union who will look to lift their first trophy as an MLS franchise. Standing in the way will be a Houston Dynamo side who is coming off a 0-0 draw against Orlando City and on the verge of elimination from the West’s playoff face. One thing for sure is that the heart given by the Union the remainder of this season cannot be doubted after the week they’ve put in.

“I’m sure a lot of people didn’t really fancy us, even today, to get a result with a lot of our starters missing out,” Simpson said. “Everyone’s confident going into the Open Cup Final. The team that usually starts are confident, and the boys who played today, I’m sure that gave us a lot of confidence going forward as well.”