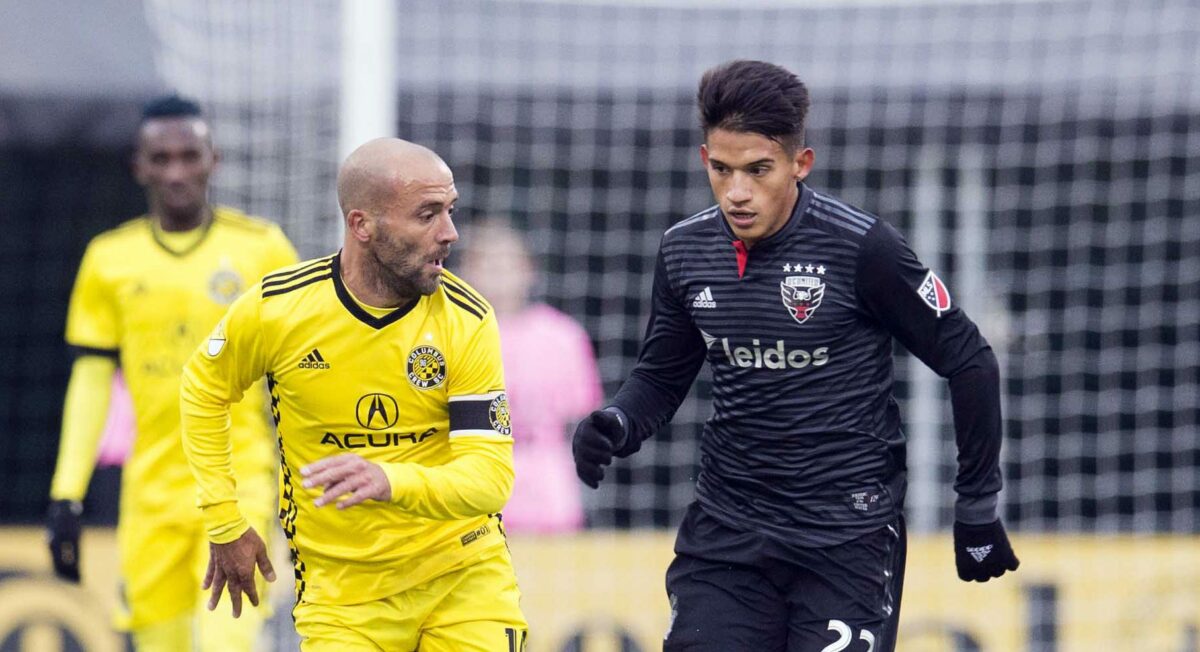 The Black and Red benefited from the opening of Audi Field and the combination of Rooney and Luciano Acosta to secure a home playoff game in the knockout round against the Columbus Crew on Thursday.

While Thursday’s clash should be about the players on the field, it’s hard to ignore the elephant in the room regarding Crew manager Gregg Berhalter’s future.

An early playoff exit after an average October won’t give U.S. Men’s National Team fans, who should watch this game intently, hope Berhalter can fully change things around on the international stage.

D.C. United and Columbus split their regular-season series, but the games were played in March and April when they were much different sides.

Rooney is the big name in the D.C. lineup, but Acosta is the catalyst that has made the Black and Red’s attack a well-oiled machine.

The diminutive midfielder finally found a consistent striker he could link up with in Rooney, and the pairing has reaped rewards for everyone involved.

In order to break down Columbus’ defense on Thursday, Acosta needs to more of what’s he been doing for the last two months in the final third.

Making incisive passes into Rooney and driving forward on his own will benefit Ben Olsen’s side and get it off to a fast start.

The No. 10 on the other side of the field is even more important to his side’s success.

Even though he’s dropped off the national radar, Higuain is still a vital part of the Crew’s attacking buildup.

Not only will the Argentinian be tasked with setting up his own teammates, he has to deal with the pressure created by Russell Canouse, who has been playing at a best XI level during D.C.’s recent run of form.

If there’s a weakness in the D.C. lineup, it’s in defense, where a few different combinations have been trotted out recently.

The center-back pairing of Frederic Brillant and Steve Birnbaum need to contain the cutting runs of Gyasi Zardes on Thursday in order to hold a clean sheet.

Zardes has benefited from his inclusion in Berhalter’s system, and most of his goals have come from close range after making perfectly-timed runs.

If the U.S. Men’s National Team forward’s progress is halted by D.C.’s center backs, the Crew will have to adjust their tactics and find a different pathway to goal.

While Rooney and Acosta have received all the headlines, Canouse has been dominant in front of the back four.

The American midfielder is more than deserving of a USMNT call-up, and he’ll get an opportunity to audition in front of Berhalter on Thursday night.

Canouse’s ability to break up plays and ignite D.C.’s attack through precision passing will be on display, and it will make a difference in a game that will be closer than expected.

Speaking of USMNT players, Zack Steffen needs to once again prove he is the No. 1 goalkeeper of the future with a standout playoff performance.

Steffen is no stranger to the big moment, as he helped the Crew eliminate Atlanta United on the road in the knockout round a year ago.

If he is able to neutralize the threat posed by Rooney and Acosta with a few top-notch saves, the Crew have a good chance of stealing a victory and setting up a rematch with the Five Stripes, or a showdown with the New York Red Bulls.

Rooney, Acosta, Higuain, Zardes and Steffen are among the players who will be under the spotlight on Thursday, but it will be the role players on each side who will make the difference.

Columbus’ center back duo of Jonathan Mensah and Gaston Sauro are capable of shutting down Rooney and holding him and Acosta to few scoring opportunities.

If Harrison Afful and Milton Valenzuela are able to get forward in attack and overlap on the wings, the Crew will be able to match the volume the D.C. forwards are expected to produce at.

Conversely, if D.C. is able to limit the runs of the Crew players on the flanks, it could be a one-sided affair with Rooney, Acosta, Yamil Asad and Paul Arriola bombarding the Crew’s defense.

A few stops by Steffen will keep the Crew in the contest, but eventually Rooney and Acosta will break through and find a way for D.C. to move to either an Atlantic Cup showdown with the Red Bulls or a matchup with an Atlanta it’s been capable of beating in the past.