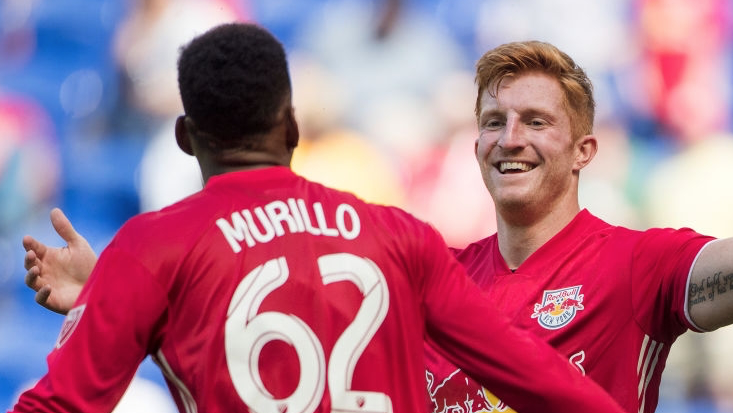 HARRISON, N.J. — We haven’t had a defense like this before.

Long-time New York Red Bulls goalkeeper and team captain Luis Robles uttered those eight words on Sunday when explaining why this is could be the year the club finally brings home the all-elusive first MLS Cup. The phrase stood out not only because of the fact that the improved back line was a key difference in a record-setting regular season, but also because it very well could be again in the playoffs.

The Red Bulls claimed the Supporters’ Shield on a dramatic final day of the campaign on Sunday, but a lot of the talk after their 1-0 win over Orlando City was on the bigger prize, that being the MLS Cup. It was natural for the conversation to head in that direction, of course. After all, New York, for all its success this decade, has never won that trophy.

The club believes this year will be different, however, and one of if not the biggest reasons for that is because of an improved defense that yielded a league-low 33 goals in a record-setting campaign a year after conceding 47 times and finishing in sixth place in the Eastern Conference.

“I would say yes because of our defensive play, how we are defensively,” said forward Bradley Wright-Phillips when asked if he feels this team has a better chance of winning the MLS Cup. “I think in the past years in the playoffs we’ve suffered from not taking our chances and not keeping cleansheets. I think since I’ve been here this team has kept the most cleansheets or they don’t give up many chances during the run of play.

“When they’re giving you that kind of chance, we always have a chance.”

The Red Bulls, despite fielding the reliable likes of Wright-Phillips and Robles on both ends of the field, have repeatedly been plagued by defensive mishaps in recent postseasons. The 2013 Supporters’ Shield winners saw their playoff hopes thwarted in part because of an Ibrahim Sekagya blunder that allowed the Houston Dynamo to pull level before winning in extra time.

Two years later, another Supporters’ Shield campaign was spoiled by a loss to the Columbus Crew in the Eastern Conference Finals. The Red Bulls lost that series, 2-1, but trailed for the entirety of it because of an opportunistic goal from Justin Meram scored 10 seconds into the first leg. Once again, shoddy play at the back was to blame.

This year’s group of defenders might be different, though. Michael Murillo, Aaron Long, Tim Parker, and Kemar Lawrence are all veterans but relatively young players with international experience, and more importantly they all seem to be perfect fits for a demanding high-press system that required loads of energy, toughness, concentration, and cover.

As a result, the Red Bulls have been as tough as ever to break down. Giving up cheap goals has largely been avoided this year, which is exactly what you want for the postseason, when games become tighter, the margins become thinner, and the pressure becomes bigger.

“You go into any playoff game or any game and you’re trying not to concede goals or you’re trying to be difficult to score against,” said Wright-Phillips. “So far this season we’ve been that team. Hopefully we carry on with that form into the playoffs and see where that gets us.”

For years, the Red Bulls have had regular-season success with their high press. They have also gotten plenty of goals in the attacking end from Wright-Phillips, and plenty of timely saves from Robles on the other side of the field.

All those ingredients are still there, but what has been added to the recipe is a much-needed tough back line – one that just helped the Red Bulls claim some more silverware in record-setting fashion, and one that looks poised to avoid the types of mistakes that have been so costly in the past.

“We have a very, very strong belief in the guys that we have because we haven’t had a defense like this before,” said Robles. “We’re hoping we’ve learned from those experiences where we’ve tasted failure.”