In a season of change, Red Bulls stay consistent and lift Supporters’ Shield 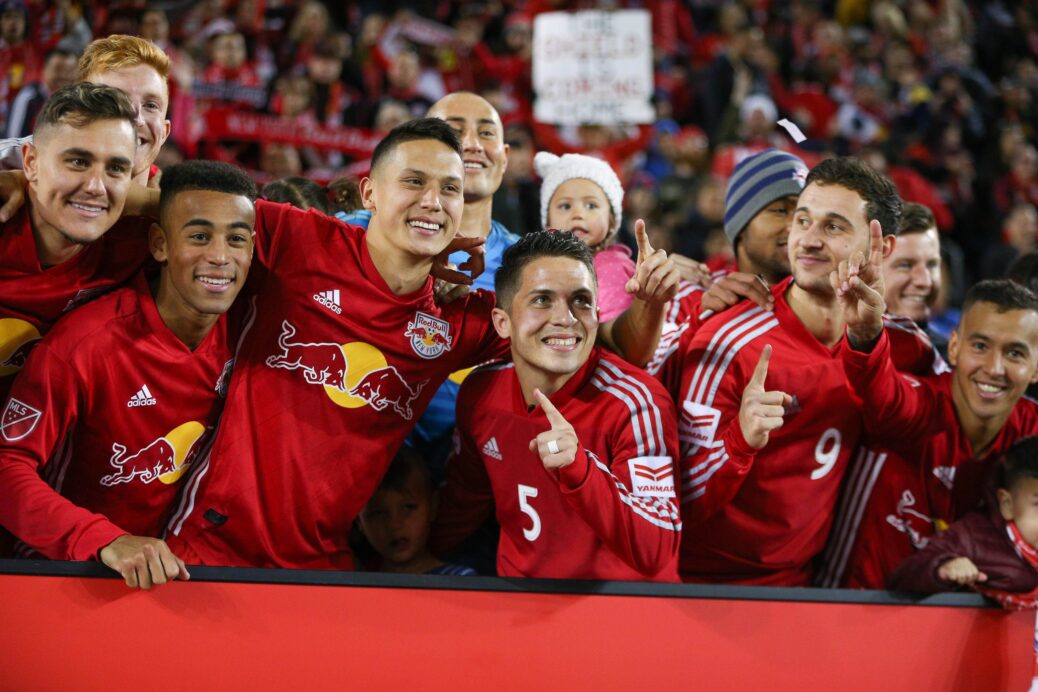 The New York Red Bulls have been in a constant state of change this season. From trading away the team’s captain, Sacha Kljestan, to adding new key pieces in Kaku and Tim Parker, to heavy rotation and integration of USL players. There was even a coaching switch midseason, making the 2018 season  an eventful one for the Red Bulls.

Yet, with all that change, form remained consistent, and the Red Bulls were able to lift their third Supporters’ Shield in six seasons, setting MLS regular-season records in the process.

“How do you do that?,” first-year head coach Chris Armas said following the Red Bulls’ 1-0 victory over Orlando City at Red Bull Arena. “We prepare as a staff with a philosophy and with the players that bring it to life. They bring it to life. You know, we guide them in the process and then game by game, step by step. Don’t get too ahead with the wins and down get too down with the losses, and really try to improve.”

The aforementioned philosophy has always been instrumental in the team winning matches, but it became incredibly important as the team started making the changes it believed would help them improve their chances at MLS Cup.

“There were some really big names offered to this organization, this year and last year,” goalkeeper Luis Robles said. “I’d go in there and say, ‘Hey, what’s going on?’ and they were very firm. They have a philosophy. They have a belief in their homegrown system and the talent that comes through their academy, the players that come from abroad, and I’m really glad they’re the ones making those decisions because it has come to fruition in the Shield.”

It also helped as the team was forced into making a coaching change, when Marsch left over the summer to become an assistant coach at RB Leipzig. His long-time assistant Armas replaced him for his first ever professional head coaching gig, and though his start was a little bit slow, he has managed to record impressive wins on the way to Supporters’ Shield.

“Things obviously change when you get a new personality,” midfielder Tyler Adams said. “Chris isn’t going to be Jesse, but a lot of things that he does are similar to the things Jesse does. He built such a great culture around Red Bull in general, and now when Chris was ready to fill in, he grew into the role. He grows each and every game. The big games that we’re now winning, it just reflects on Chris’s playing career, because that’s what he did all playing career. He knows what it’s like to raise trophies, and now we want to know what it’s like. We raised one today with him, and I think we’re hungry for more.”

Forward Bradley Wright-Phillips had a similar feeling, saying “You watch any league around the world, coaches are going, players are going, and they get on with it. We trade a big player or our coach goes because he’s done amazing, everyone’s like, ‘Oh, they’re going to be rubbish. What are they going to do?’ All of a sudden, we’re going to forget how to play football or what the culture is at Red Bull. I don’t think these things really — unless your team is not really weak and don’t have a system, I don’t think they rock the boat that much, and I think we showed that.”

The Red Bulls’ current success is part of a long stretch of being an Eastern Conference heavyweight. The team is now headed into the playoffs for a ninth straight season, finishing the regular season at the conference’s number one seed on five occasions. For the Red Bulls, it ultimately comes down to those who created and believed in the system, and that includes Marsch, who Armas said “doesn’t get enough credit” for the “culture change” at the club.

As the Red Bulls reflected on their success, long-term and not, in the hours after winning the Supporters’ Shield, the conversation eventually led to the infamous town hall of winter 2015, shortly after Marsch was hired and fan favorite Mike Petke was fired. Robles called it a “top five Red Bull memory” and a “unique experience,” but also took away something else while remembering the anger-fueled interactions.

“I hope that the fans can see that everything Ali [Curtis], Jesse, and Marc [de Grandpre] were saying came to fruition,” the captain said. “They’ve really stuck it out and believed in the younger players, and for us to go into the season the way we did, so young, and yet staying with so much experience. There is a very deep belief within this group that we’re doing something very special, and for us to get one trophy is great, but there’s another one we can get, and you better believe that every single person in this locker room, in this organization, in the South Ward believes that we can.”