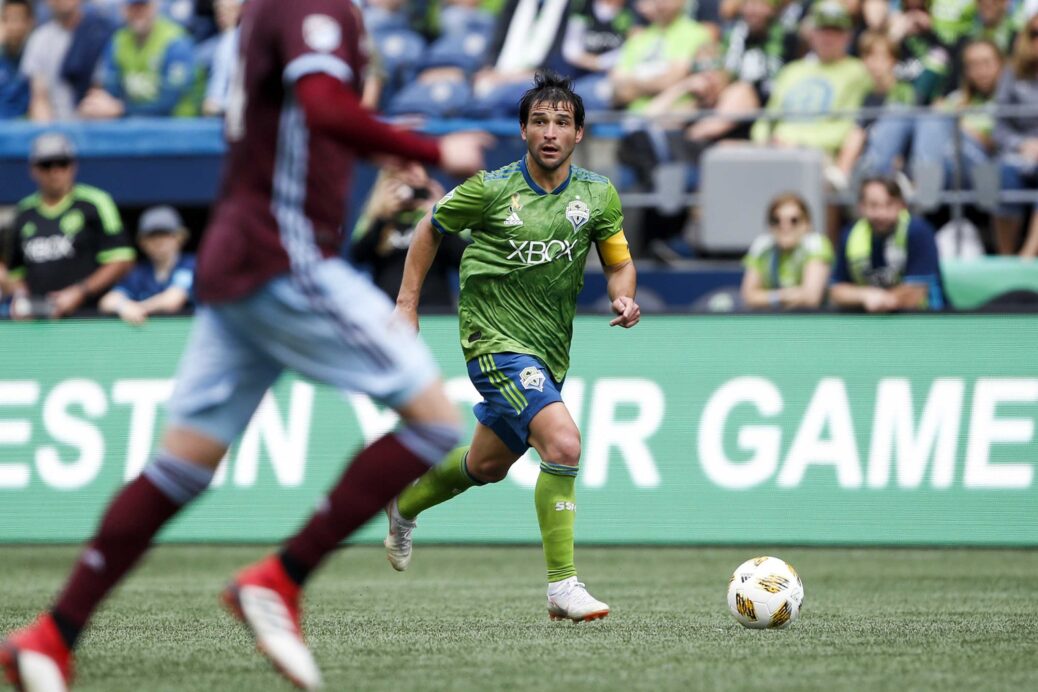 SEATTLE, Wash. — Nicolas Lodeiro is no stats monster. At his best, which he has been for most of the last three months, he pairs what Garth Lagerwey has called a “big soccer brain” with seemingly bottomless reserves of energy and an array of technical gifts to bend a match in his team’s favor. He does this without piling up gaudy numbers of goals or assists.

Signed midway through the 2016 season by Lagerwey, the Sounders’ general manager and president of soccer, Lodeiro has orchestrated the Sounders’ attack from the moment he first took the pitch at CenturyLink Field. He is the relentless string-puller who often makes the proverbial pass before the pass. Head coach Brian Schmetzer gives him free reign, and he takes full advantage, roaming endlessly from touchline to touchline and end line to end line. Ostensibly a No. 10, it is not uncommon to see him pop up in his own penalty area in the dying moments of a match, poking the ball away from an opposing forward to preserve a result.

But the goals and assists are now starting to pile up as well. In Saturday’s 4-0 victory over the Colorado Rapids, the 29-year-old Uruguayan delivered a pair of quality assists in a match Seattle needed to stay in the thick Western Conference playoff race. He earned and converted a penalty kick. He recorded 114 touches and completed 92 percent of his team-leading 86 passes.

Asked to comment on Lodeiro’s performance, Schmetzer, as he often does, demurred and pointed to the larger team effort.

“Everybody on that field contributed, and certainly Nico is a big part of our team,” Schmetzer said. “But I hate to label it as, ‘OK, this guy is really, really great,’ because I felt everybody had pretty strong performances.”

Perhaps, but Lodeiro leads the team in both goals (8) and assists (11), and has now recorded double-digit assists for the second straight season. He has also contributed seven goals and nine assists in the last 16 games alone, a three-month stretch that saw the Sounders post an 11-3-2 record and bully their way from the dregs of the Western Conference standings into the playoff spots.

He has clearly been a different player down the stretch, putting a lingering early-season ankle injury behind him and overcoming the disappointment of being left off Uruguay’s World Cup roster.

The arrival of Peruvian striker Raul Ruidiaz hasn’t hurt, either.

Since debuting on July 25, it’s been easy to see why the diminutive Designated Player led Liga MX in scoring over the last two campaigns. He has tallied seven goals in 11 starts. He makes wily, darting runs off the ball, oozes swagger, and has proven to be coolly clinical in front of goal. He recorded his second brace in a Sounders’ uniform on Saturday. Lodeiro assisted on both, and it clearly won’t be the last time the two pair up to find the back of the net.

“In reality, we understand each other very well,” Ruidiaz said through a translator. “Every time he gets in possession of the ball I prepare to make the runs because I believe there’s going to be an opportunity, and the possibility for goals.”

As a threat defenders must constantly track, Ruidiaz also creates space that opens up the Sounders’ entire attack.

“You can say that it’s the relationship between Raul and Nico, Raul and Victor [Rodriguez], Raul and Ozzie [Alonso], Raul and Cristian [Roldan],” Schmetzer said when asked specifically about the chemistry between Lodeiro and Ruidiaz. “We have to remember, Raul has 11 starts. There’s been a lot of history in MLS about midseason signings not really catching on. So, I think we’ve done a good job. I think the front office has done a really good job of getting us a player who does actually fit in. So I think in that sense, it is Nico and Ruidiaz because they’re in those central roles as a No. 9, as a No. 10. But I think it manifests itself throughout the team as well.”

Saturday also marked something of a reintroduction for Rodriguez, who has had a difficult go of it in his first full campaign with the Sounders. Signed with Targeted Allocation Money in the 2017 summer transfer window, the 29-year-old Spaniard made an immediate impact last year as a high IQ, technically gifted playmaker who always seemed to keep one eye on goal. But a knee injury sidelined him for the first two months of this season. After returning, he made only nine appearances before struggling with hamstring injuries that have limited his availability since late July.

He went 90 minutes on Saturday for the first time since June 30, looking perhaps more like the Victor Rodriguez of last season than he has all year. He scored the fourth and final goal of the match, taking one touch to settle a pass from Kelvin Leerdam before rifling a shot past Tim Howard and into the far upper corner. He was also credited with an assist on the Sounders’ third goal.