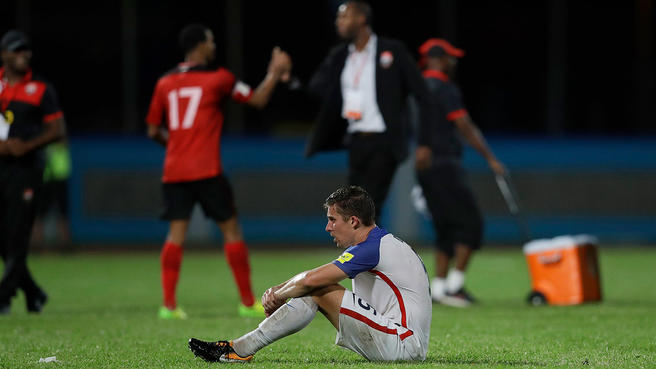 One year ago today, the unthinkable happened to the U.S. Men’s National Team – the USMNT failed to qualify for the 2018 FIFA World Cup, as it fell 2-1 to Trinidad and Tobago.

The failure was years in the making as a failed generation of players and mismanaged teams set the course for the frustrating night in Couva.

One year after suffering the heartbreak of failing to make the World Cup, U.S. Soccer hasn’t done much to remedy the situation. Currently, there’s a band-aid that’s easy to rip off covering the problems of the men’s national team program.

Steps have been taken in the right direction by hiring a general manager in Earnie Stewart and playing young talent in friendlies, but neither of those are significant developments until a head coach is chosen.

In order to make a true push toward 2022, one that starts with next summer’s Gold Cup, the USMNT needs to have a proper direction.

Until Stewart hires a head coach, which hopefully is sooner rather than later, there’s not much to be excited about regarding the USMNT.

Sure, the new generation of players led by Tyler Adams, Weston McKennie and Timothy Weah are promising, but what good is it to their development to play under an interim head coach in Dave Sarachan.

Sarachan’s been put in an unfortunate situation from the start, but no one expected him to be the interim manager past the summer. To his credit, Sarachan’s put young players in difficult situations and produced some results – like September’s 1-0 win over Mexico – but he can only do so much to further the talent he has at his disposal.

The lack of direction doesn’t stop at the playing style instituted by whoever the new head coach is.

There’s a huge question as to which of the experienced players should be involved, if any, and if they aren’t brought back is it because of the failure in Couva?

Michael Bradley is back with the USMNT for the October friendlies as is Brad Guzan, but Sarachan’s been hesitant to bring in more veterans as he hands playing time to the youth.

All the questions surrounding the senior team just scratch the surface of the issues facing Stewart and his cohorts at U.S. Soccer.

On top of failing to name a senior team head coach in reasonable time, there’s no manager for an Olympic team that must qualify for 2020 after past disappointments.

The U-20 team is still under Tab Ramos’ direction, but what happens when this new coach comes in? Do things stay the same until after qualification or the 2019 U-20 World Cup?

And then there’s a boatload of off-the-field issues that need to be fixed as well, and if we listed them all, we’d be here all day.

Instead of taking the issues head-on since last October, U.S. Soccer has dragged its feet.

It’s understandable in a sense if the federation wanted to vet the best candidates for both the general manager and head coaching positions, but even that defense can’t be used since Stewart just recently started seriously interviewing the final candidates for the coaching job.

The USMNT is still the same mess it was a year ago. In many ways, the last 12 months have been wasted. The only thing the program has to hang its hat on since Couva is the integration of young players.

While other nations who missed out on the World Cup have moved forward with their programs, the USMNT is still stuck in neutral.

Any optimistic fans, if there are any left, have to hope the wait is worth it. But, given what’s occurred over the last year, success and progress aren’t worth waiting for. It needs to come now.