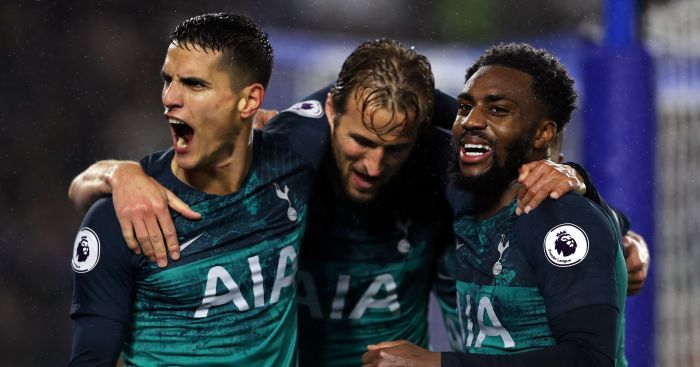 Matchday 2 of the UEFA Champions League gets underway starting on Tuesday with several teams seeking their first points in the competition. Wednesday’s slate though sees a pair of headliners featuring dangerous attacking fronts.

After a collapse on the road in their opener, Tottenham Hotspur welcomes Barcelona to London seeking another home upset at Wembley in the UCL. Harry Kane and Lionel Messi highlight the attacking fronts for both teams.

In Napoli, the hosts welcome group leaders Liverpool to the San Paolo. The Reds edged PSG at Anfield in their opener while Napoli was frustrated by Red Star Belgrade in a scoreless draw.

Injuries of Note: Dele Alli will miss out for Spurs due to a recurring hamstring problem, while Christian Eriksen, Jan Vertonghen, Serge Aurier, and Moussa Dembele are also out. Barcelona have no injury concerns ahead of their trip to Wembley.

Key to the Game: Spurs will need to play the full 90 for a chance at all three points following their slip-up in Milan in their opener. Dealing with Lionel Messi and Co. is no easy task but Tottenham’s backline is one of the best in Europe. Barcelona will seek to hold possession and catch Tottenham out wide.

Player to Watch: Harry Kane will need to have a strong outing for Tottenham due to the absence of both Eriksen and Alli. With the lack of playmakers in Tottenham’s midfield, Kane could see his day even busier.

Quote: “We’re all bitterly disappointed from how the Milan game finished,” Spurs defender Danny Rose said. “We have to win. We’re full aware of that. We’ve proved that we can do it. At the minute we’re winning ugly.”

Injuries of Note: Alex Oxlade-Chamberlain, Adam Lallana, and Divock Origi will all miss Liverpool’s trip to Napoli. Faouzi Ghoulam, Amin Younes, and Vlad Chiriches are all expected to miss for the hosts.

Key to the Game: Both teams attacks have the ability to pound in goals, but defensively they need to be up for task. Led by talented centerbacks, Virgil Van Dijk and Kalidou Koulibaly headline the backlines that will need to have strong outings if their sides want to win.

Player to Watch: Mohamed Salah is not at his best yet this season, but the Egyptian can change that with a strong outing in Italy. His pace will be hard for Napoli’s defense to handle and Salah cannot afford to hang his head if things don’t go his way early.

Quote: “It’s always tough playing away against a great club,” Liverpool keeper Alisson said. “In Napoli, we’ll definitely find really passionate fans, and a team that comes onto the pitch with a huge desire to win. The only time I played there, it was one of the toughest games of the season for us in Serie A. They’ve had the same basis of the team for three to four years.”

Injuries of Note: Corentin Tolisso remains a long-term absentee for Bayern, while Rafinha, Kingsley Coman, and Leon Goretzka are all recovering from issues of their own. Ajax club captain Joel Veltman misses out with a cruciate ligament injury, while Frenkie de Jong is also a doubt.

Key to the Game: For Ajax to have any chance on Tuesday, they will need to be firm at the back. With some key players already set to miss, Daley Blind will need to take charge of a talented backline. The Dutch international has had a strong start since joining from Manchester United.

Player to Watch: Ajax striker Klaas-Jan Huntelaar has 10 goals in 14 matches this season and is a familiar presence for the Bayern backline following his time with Schalke.

Quote: “It will be fantastic to play against a Dutch team. In all my years of playing in the Champions League it has only happened to me once or twice,” Bayern winger Arjen Robben said. “I hope we see a game of good quality.”

Injuries of Note: Jose Mourinho stated that Jesse Lingard, Marcos Rojo, Ander Herrera, and Ashley Young will miss out due to fitness problems. Valencia has a full squad coming into their trip to Old Trafford.

Key to the Game: Valencia needs to take a tip out of Derby County’s playbook and go after the Red Devils at full speed. Sitting back and defending may work for a little, but the La Liga side needs to attack for a chance at an upset win. United will hope to dominate in possession and beat Valencia through aerials to their tall striker, Romelu Lukaku.

Player to Watch: Paul Pogba bagged a brace in United’s first win of the UCL and will need to show his worth on Tuesday. The Frenchman has the ability to flip a match in his side’s favor and would love to get back on his manager’s good side with a strong performance.

Quote: “A Champions League week is always a good week, even if you expect a difficult match, a difficult opponents, Mourinho said. “Everyone wants to play Champions League, not everyone can do it. So we are here and we have the chance to play a big match. So big match, big week.”