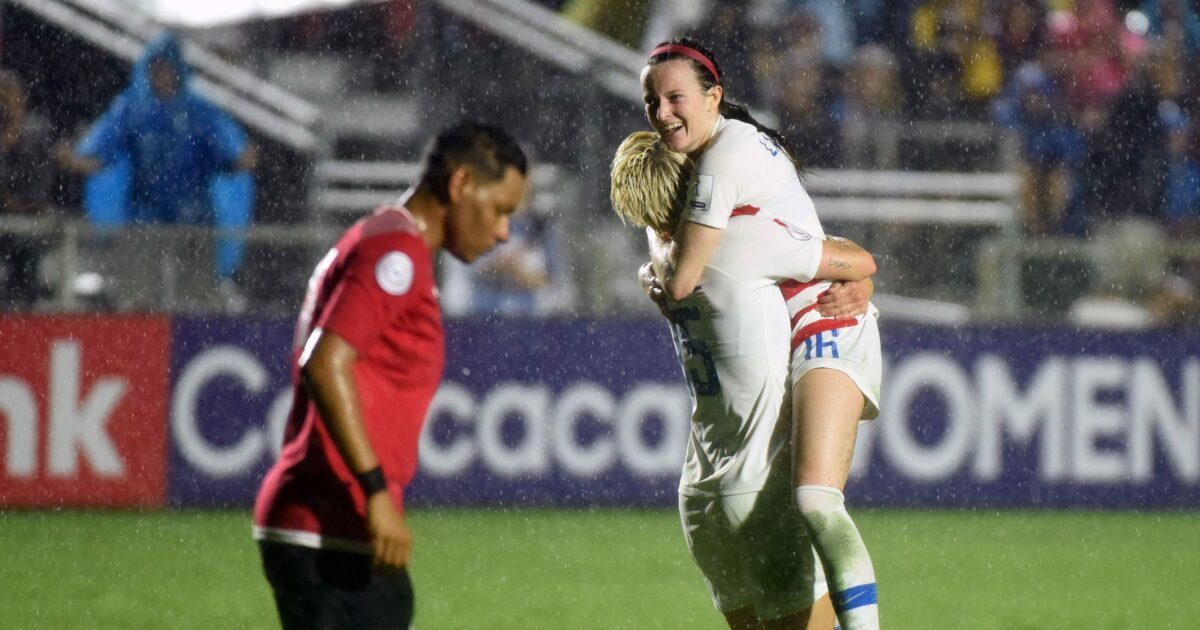 The U.S. women’s national team closed out the group stage of the Concacaf Women’s Championship with a 7-0 victory over Trinidad & Tobago on Wednesday, finishing top of Group A.

Quick starts have been a common occurrence for the USWNT in this tournament, and Wednesday’s match was no different. Alex Morgan opened up the scoring with a goal in the ninth minute, slipping the ball past goalkeeper Saundra Baron from close range.

It took the U.S. team more than a half hour to get a second through a combination of Trinidad & Tobago’s defensive structure and unlucky finishing. The opposition’s defensive blocks started to get organized after conceding the first goal, with the defense doing as well as it could to keep out the reigning world champions. However, the USWNT managed several chances, though the finishing was inconsistent. While a few chances ended up hitting the crossbar or a goalpost, there were also a few that missed the target altogether.

In the 40th minute, though, the USWNT was able to get their second goal through Rose Lavelle. The Washington Spirit midfielder took a shot from outside the penalty area, which sailed over the defenders in the box and past Baron for a 2-0 lead.

Three minutes later, Lavelle recorded a brace to begin putting the game out of reach for Trinidad & Tobago. A play that started near the corner flag with Crystal Dunn involved Lindsey Horan putting it into the penalty area for Megan Rapinoe, and then the Seattle Reign player then passing the ball in front of the goal line. From there, Horan added another touch before Lavelle found the ball in a messy penalty area and scored from near the goal line.

The USWNT ended the half up 4-0, as Dunn scored in the 44th minute. Tobin Heath put a ball into the penalty area, and after a deflection, Dunn scored a rocket from the edge of the box as the U.S. team started padding the goal difference.

The U.S. team then added another just four minutes after the break, with Horan getting on the scoresheet. The midfielder scored what was another long range effort, scoring on a rebound yards away from the penalty area.

Morgan completed her brace in the 50th minute, making the score 6-0. Heath dashed into the penalty area and took a shot, which Baron saved. Morgan, though, picked up the ball and shot from a tight angle, leading to the ball hitting both goalposts before finding itself in the back of the net.

The game’s final goal came in the 58th minute, with Rapinoe and Heath combining for the goal. Rapinoe made a run down the left side of the field and perfectly placed the ball for Heath on the other side of the goal, who easily tapped it in from the middle of the penalty area.

The USWNT finishes the group stage with nine points out of nine, scoring 18 goals and conceding none in the process. The team awaits the second place finisher in Group B before a semifinal, the winner of which books a spot at next year’s World Cup.