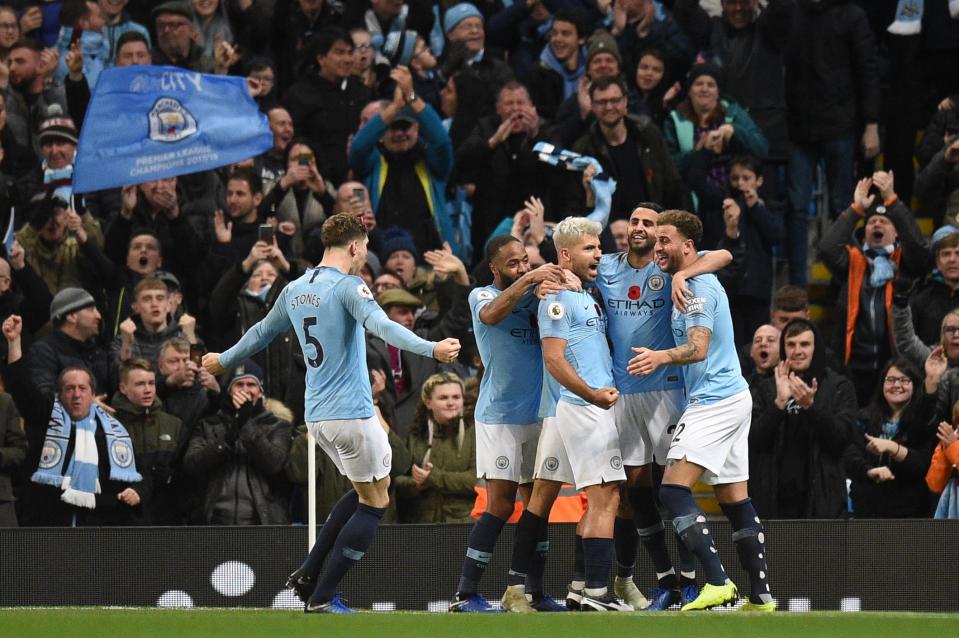 Manchester City came into Sunday’s derby against Manchester United looking to get the taste of last season’s defeat out of their mouths. David Silva and Sergio Aguero each bagged goals as the league leaders edged their rivals 3-1 at the Etihad Stadium.

Silva’s opener came in the 12th minute as the Spaniard beat international counterpart David de Gea from close-range. Aguero got in on the action in the 48th minute, rifling home a right-footed effort for his eighth goal in all competitions. However, the Red Devils did not lie down as Romelu Lukaku came off the bench to win a penalty in the 58th minute. Anthony Martial slid home his sixth goal of the season to pull the deficit to one. Despite pressuring for an equalizer, Manchester United eventually conceded a third which gave City the victory. Ilkay Gundogan capped off a great team play in the 86th minute to shut the door on any late drama. Pep Guardiola’s side go into the international break atop the league table, while Manchester United drop to eighth.

Elsewhere, Tottenham Hotspur edged Crystal Palace in a London Derby while Barcelona welcomed Real Betis to the Camp Nou. AC Milan and Juventus met up in the Serie A headliner of the weekend. PSG faced a slumping Monaco in Ligue 1, while Bayern Munich and Borussia Dortmund took part in a thrilling Der Klassiker.

Tottenham Hotspur moved into the top-four with a slim 1-0 victory at Crystal Palace on Saturday. Following a scoreless first-half, defender Juan Foyth scored the eventual winning goal in the 66th minute. The Argentine stuck with the play following a corner and headed in his first goal for the club. Hugo Lloris made four saves to preserve the clean sheet, helping Spurs to their fourth straight win in all comps. Palace remains in 16th place, sitting outside of the relegation zone on goal difference.

Real Betis snapped Barcelona’s 43 match home league unbeaten streak with a dramatic 4-3 win on Sunday. The visitors got out to a strong start, scoring a pair of goals in a 14-minute span. Junior Firpo and Joaquin each scored goals to give Betis a 2-0 halftime advantage. Lionel Messi’s 68th minute penalty kick goal pulled Barcelona to within one but Giovani Lo Celso answered back in the 71st for Betis. Arturo Vidal’s 79th minute goal continued the dramatic second-half, which saw Ivan Rakitic sent off just two minutes later. Sergio Canales scored the eventual winning goal despite Messi’s stoppage time finish. Betis jumped up to 12th place while Barcelona remain in first for now.

Borussia Dortmund claimed their first league win over Bayern Munich since 2016, downing the defending champs 3-2. Marco Reus led the way with a brace while Paco Alcacer scored the winning goal off of the bench. Former Dortmund star Robert Lewandowski scored the lone goal in the first-half, finishing Serge Gnabry’s assist in the 26th minute. Reus leveled the match in the 49th minute from the penalty spot before Lewandowski retained the lead for Bayern three minutes later. Reus’ right-footed finish in the 67th minute leveled things at 2-2 before Alcacer finished from a fast break six minutes later to win the match. Dortmund remains perfect in league play while Bayern dropped to fifth with their third league loss of 2018-19.

Napoli used a pair of second-half goals to down Genoa 2-1 on Saturday away from home. Fabian Ruiz’s equalizer in the 62nd minute leveled the match after Christian Kouame scored first in the 20th minute for Genoa. While it looked like Genoa would hang on with a point, disaster struck in the form of a Davide Biraschi own goal after 87 minutes. The win puts Napoli to three points behind Juventus while Genoa are in 14th, losing their third in a row.

Marseille ended their four match losing streak with a 2-0 home success over Dijon on Sunday. The hosts went into halftime on the back of a stoppage time finish by Lucas Ocampos for a 1-0 lead. Adil Rami put the game to bed in the 84th minute, heading Kevin Strootman’s pass in for his first goal of the season. The win has Marseille sitting in sixth, while Dijon is in 18th.