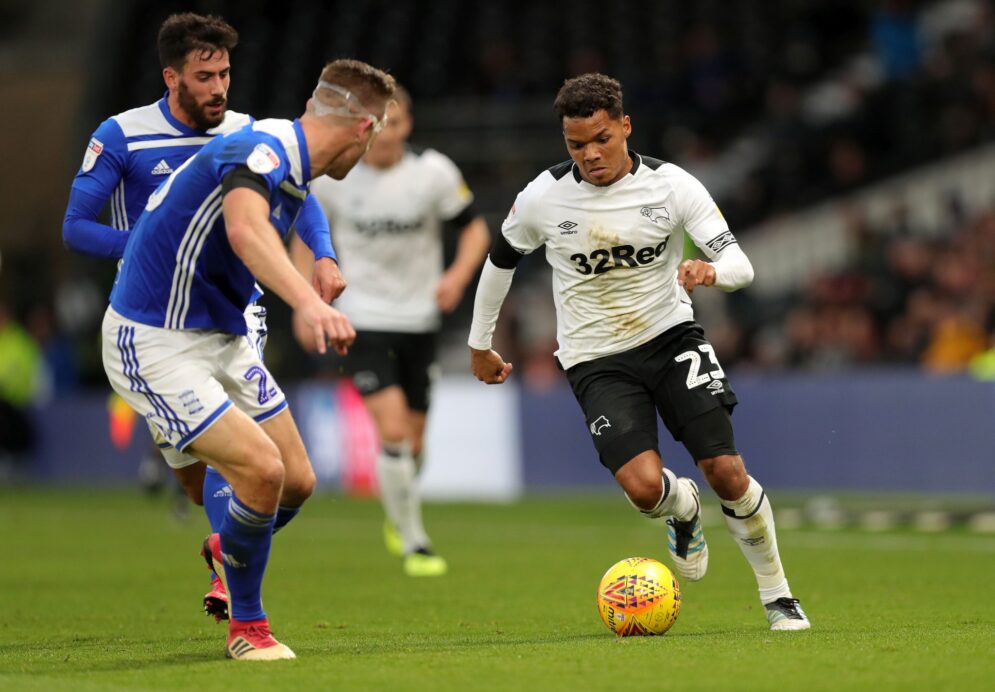 2018 marked the return to the EFL Championship for midfielder Duane Holmes after the midfielder signed for Derby County back in August. After a pair of seasons with third-tier side Scunthorpe United, the 23-year-old has been fighting for regular playing time with the Rams under new manager, England and Chelsea legend Frank Lampard.

Saturday saw Holmes make his full debut with the Rams as they brushed aside Birmingham City 3-1 at Pride Park Stadium. Despite allowing an early goal to the visitors, Derby used a trio of goals in a 20-minute span in the second-half to extend their league unbeaten run to six matches.

Holmes played 90 minutes in the win, taking the place of the injured Chelsea loanee Mason Mount. The U.S. midfielder was a lively presence, completing 80% of his passes, winning two free kicks and having one shot on goal. After the win, Holmes received great praise from Lampard who felt the midfielder was important to the home win.

“Duane Holmes came in for Mason Mount and deserves huge credit because to fill his boots with the way Mason is playing is tough on one hand but to play the way he did in the second half, I thought he was crucial to the win,” Lampard said.

“He’s a young player and in the second half we can see what he can do,” Lampard continued. “He has an injection of pace, he can move away from people in midfield which opens up the space. I’m delighted with Duane.”

The 19-year-old Mount joined Derby on loan from Chelsea and has been a vital part to the Rams success so far. His five goals and two assists in all competitions shows his strength offensively while defensively he’s put in a lot of work off the ball.

With only 33 minutes of game action in all competitions before Saturday’s start, Holmes showed zero signs of rust as he picked up where Mount left off. He added spice to the match and showed the grit and determination that Lampard saw to sign him from Scunthorpe earlier this season.

Holmes’ 78 appearances in two seasons with his Scunthorpe, proves he has been able to earn match time at the lower levels of English football. Still with a highly talented roster at Derby currently, the midfielder will need to make the most of every appearance he makes. Lampard took a risk of playing Holmes on Saturday and it paid off in big dividends, now the former Chelsea star thinks this is just the beginning of Holmes’ success.

“He is desperate to play, he has been training really well over the last couple of weeks,” Lampard said. “He has showed up all the time and he is here for the future of the club. He has had to be patient but in the big picture here, he signed in the summer under the radar but I think he is going to be a big player for us.”

Derby sits in fifth place on 28 points after the win and are next in action on Nov. 10th at home against Aston Villa.