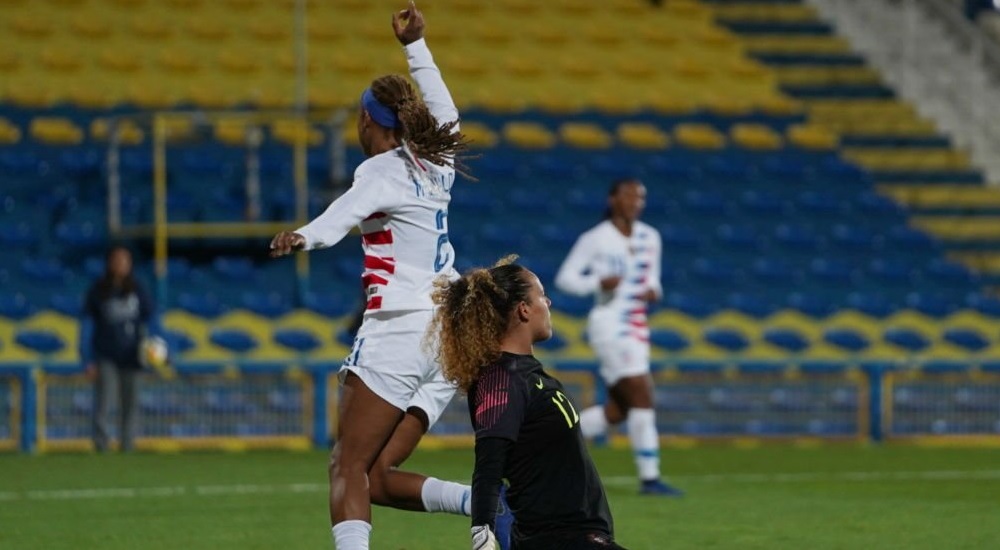 The U.S. Women’s National Team saw a few first caps and a first international goal for Jessica McDonald as they recorded a 1-0 victory over Portugal on Thursday.

The game’s lone goal came at the end of the first half, with forward McDonald scoring her first USWNT goal in her second match. In a play that started on the right side of the field, Crystal Dunn received the ball near the penalty area and sent in a cross. McDonald was waiting in the middle of the box and took a shot at goal, which goalkeeper Patricia Morais stopped at first. However, the rebound fell to McDonald again, and she easily got the finish.

Though the USWNT dominated the first half, having 61% of possession, it was not as smooth a match as the reigning world champions are used to. The match was a little bit choppy, and the lack of chemistry showed. Head coach Jill Ellis elected to start McDonald in the forward line over Alex Morgan, Andi Sullivan in midfield over Julie Ertz, and Emily Fox at right back in the absence of Kelley O’Hara, meaning there were adjustments that needed to be made. For their part, Portugal also did well to keep the USWNT at bay with an organized defense, and even managed to outshoot the visitors five to four.

The USWNT, though, made alterations and came out with more energy in the second half. With Morgan entering for McDonald, the forward line seemed to be more active as the familiarity between Morgan, Megan Rapinoe, and Mallory Pugh increased. Shot after shot followed, but a second goal never came.

Much of it was because of Morais’s stellar performance in goal, making some crucial and necessary saves in the process. That said, Portugal managed a similar performance in the first half, though the USWNT dominated in several statistics. They continued to create chances for themselves and did well at times in possession, but they ultimately ended the match without the goal they were searching for.

In addition to McDonald’s individual milestone, University of North Carolina’s Fox and Chicago Red Stars midfielder Danielle Colaprico recorded their first international caps, making them the 26th and 27th players to do so under Ellis. Additionally, the victory marked the USWNT’s 500th overall win, and 17th this year as the team enjoys an unbeaten 2018. The final test of the year will come on Tuesday against Scotland.