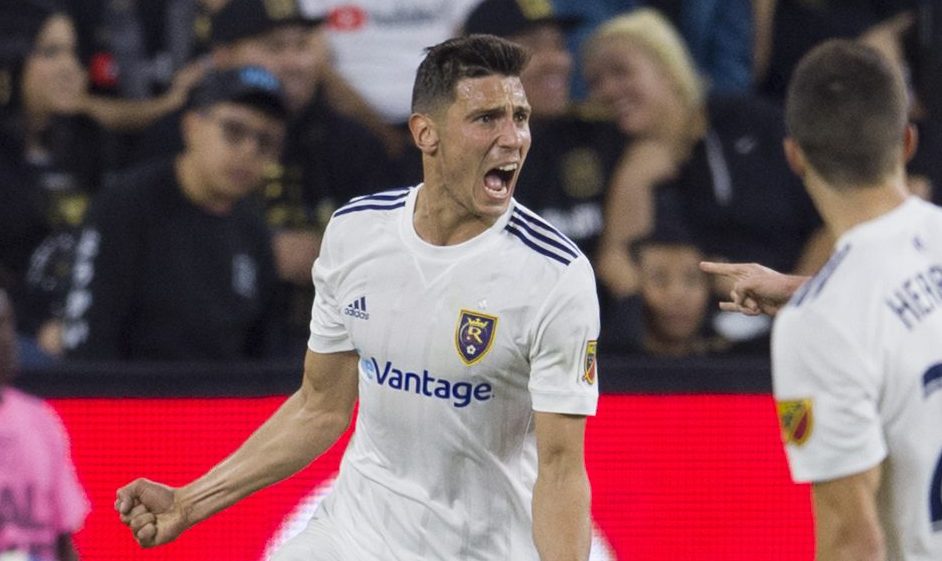 When you wake up in the morning, remember to pick your jaw up off the floor after leaving it there following the indescribable Western Conference knockout-round game between LAFC and Real Salt Lake.

Anything that could happened was spoken into existence in the Claret and Cobalt’s 3-2 victory at Banc of California Stadium on Thursday night.

Mike Petke’s men, who were handed a playoff berth by an LA Galaxy loss on Sunday, came back from a goal down in the second half to set up a conference semifinal showdown with rival and top seed Sporting Kansas City.

RSL jumped into lead in the 21st minute as Damir Kreilach finished off a wonderful delivery from Brooks Lennon.

Ten minutes later amidst a pelting of Nick Rimando by The 3252, Danilo Silva leveled for LAFC off a set piece.

Directly after Silva’s goal, referee Mark Geiger decided to suspend the game for five minutes to get the LAFC supporters section under control.

In the 54th minute, Christian Ramirez blasted LAFC into the lead, but the advantage only lasted four minutes.

Kreilach equalized for RSL on a jaw-dropping crane kick from the top of the penalty area to reignite the visiting side’s chances of leaving with a victory.

The improbable became reality in the 69th minute, when a freak deflection led to a Walker Zimmerman own goal on the right side of the penalty area.

Surprisingly, the final 20 minutes, and the ten minutes of stoppage time, were tame compared to the 70 that preceded it.

When the final whistle mercifully blew, LAFC was left stunned by the No. 6 seed in the West, who had the worst goal differential and road record of any playoff team in the West.

Damir Kreilach produced a pair of incredible strikes, including his ridiculous equalizer, to advance RSL into the conference semifinal round.

Kreilach’s crane kick from the top of the penalty area stunned everyone watching the game, and it changed the course of the contest.

Walker Zimmerman was charged with the own goal on a night in which LAFC’s defense simply wasn’t good enough.