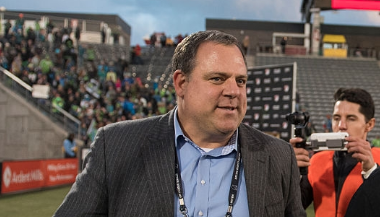 SEATTLE — No bitterly contested recount required here: Seattle Sounders fans have voted by an overwhelming margin to endorse Garth Lagerwey as the club’s general manager and president of soccer.

Lagerwey, who joined the club in late 2015 after a stellar seven-year run as general manager at Real Salt Lake, earned 87.3 percent of votes cast in the quadrennial retention vote.

“It is an honor and a privilege first to have been appointed to be the general manager of the Seattle Sounders,” Lagerwey said after the results were announced at the club’s annual meeting with supporters on Tuesday night. “But now to be elected to that position means even more. To have the support of all of you. To have the support of 87 percent of the fan base. I don’t know if 87 percent of people agree on the flavors of ice cream that they like. So that’s pretty cool, and that means a lot.”

The result was perhaps a foregone conclusion, given the club’s success in the four years since Lagerwey joined the organization. The Sounders made back-to-back MLS Cup appearances in 2016 and 2017, hoisting their first MLS Cup trophy in 2016. The club also qualified for the playoffs all four years of Lagerwey’s tenure, reaching the Western Conference semifinals in 2015 and 2018 and advancing to the CONCACAF Champions League quarterfinals in 2018.

Nicolas Lodeiro, acquired in July of 2016 as Lagerwey’s first marquee signing with the Sounders, stands as arguably the greatest midseason acquisition in league history. The Uruguayan No. 10 fueled a near miraculous turnaround that ended with a league championship. Lagerwey’s second marquee acquisition, Peruvian striker Raul Ruidiaz, scored 13 goals in 16 matches across the regular season and playoffs this year and looks set to anchor a potentially lethal attack next season.

Only 37.2 percent of season-ticket holders cast a vote, falling short of the 40 percent threshold required to make the vote binding. Even if it was effectively an advisory vote, that didn’t diminish the enthusiasm of minority investor Drew Carey — who brought the idea for a retention vote to the Sounders after visiting Spain.

Carey then made a sly reference to last week’s real-world elections.

“I really do think that, just like in all politics, things are pretty smooth, nobody is really worried about things, so the turnout isn’t big. [Not] like when an election is really important — [then] it’s life and death. You know, like lately.”

And Carey insisted that any fans who doubt the value of the vote will eventually see its merit.

“One of these days, there’s gonna be a big vote,” he said, “with 80 percent of people showing up to vote, and it’s gonna be real contentious. ‘Should we keep this guy or not — this woman or not?’ It’s gonna be a big thing. And you’re gonna be glad this thing is in place. I guarantee it. I might be dead, but that’s OK.”

Looking forward to the 2019 campaign, Lagerwey seemed more comfortable with his squad than he has after previous campaigns came up short — even if losing to the Portland Timbers in the playoffs was especially disappointing.

“Losing to a rival is difficult,” he said. “When you see the other three favorites go through, and we’re at home, it makes it more difficult. But we think we have a good team. We feel like we were banged up at the beginning of the year, and the results reflected that. But once we got our team back together and got everybody on the field, we had the best half-season in the history of MLS.”

And as multiple players suggested after the playoffs, Lagerwey said some rest will his team a world of good, something he realized during end-of-season exit interviews.

“A couple of stalwart guys said they were tired,” he said. “And these are tough guys. These are mentally resilient guys. And to hear them say that — at the end of the day, we’ve played almost three years with basically two months off. That’s just a lot to ask of anybody. So if there’s a silver lining to a gut-punch loss like that, I think next year sets up very well to compete on all fronts. We’re not in Champions League, so we don’t have to rush preparation, we don’t have to put our athletes under that kind of stress and pressure for next year. And we can actually give ’em some time off. We’re sending them away and saying ‘Don’t do anything, don’t look at a soccer ball for three weeks.’ And some of our guys need it, honestly. And I think it’s going to set us up for a lot of success next year.”

So confident is Lagerwey, in fact, that he doesn’t anticipate a whole lot of off-season turnover.

“Inevitably a couple of guys will change, that’s the cycle of pro sports,” Lagerwey said. “But I think our foundation is healthier and better than it’s ever been before. You know, people ask me, ‘Is this the best Sounders team ever?’ And I say, ‘Well, the salary cap has doubled in the last two years, so if it’s not I’ve really, really screwed up, and squandered lots and lots of resources.'”

One place Lagerwey does see the chance for some turnover is the bottom of the roster, where the club hopes to begin signing more youth players to the senior team.

“We have the ability to really dramatically upgrade [the bottom third of the roster] over the next two years,” he said, citing the fact that the club’s U-17 side was crowned national champions this summer. The club has also signed 10 Homegrown Players to its Tacoma-based USL side.

“We hope that within the next two years we start signing these kids to impactful roles with the first team,” he said.

Other than that, Lagerwey sounded like a man who believes his team is ready to hit the ground running next spring.

“I think our team is in a good spot to win multiple titles, to put some stars on the jersey,” he said. “And that will be our goal going forward.”