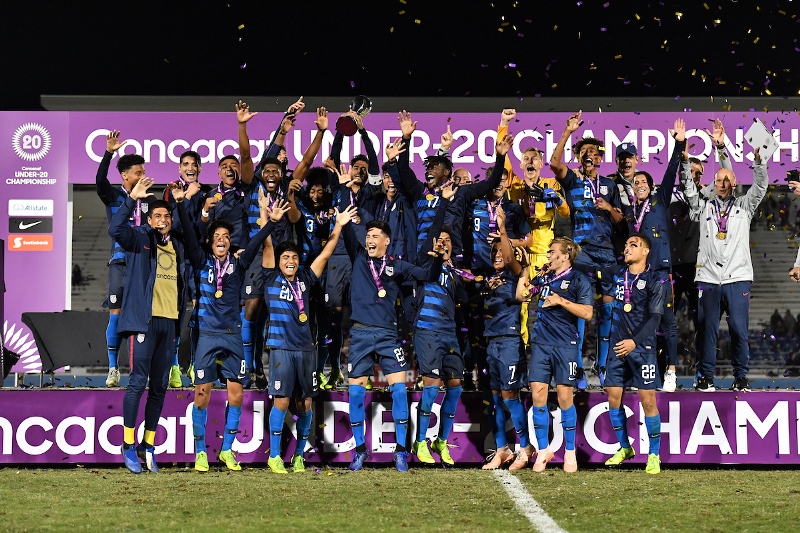 Being able to go unbeaten in any tournament is impressive. Defeating your biggest rivals in the final makes lifting the championship that much more memorable.

The U.S. U-20 Men’s National Team made it back-to-back Concacaf Championship titles with a 2-0 finals victory over rivals Mexico in Bradenton on Wednesday evening.

Alex Mendez capped off a superb tournament, scoring a brace in the triumph. He would later claim the Golden Ball as the tournament MVP.

Mendez broke the deadlock in the 16th minute, rifling home first time just outside of the box. The midfielder’s left-footed shot found the bottom-right corner.

Brady Scott made an important kick save in the 42nd minute to keep Tab Ramos’ side in front.

Quickly into the second-half, Mendez doubled his tally to add to the hosts advantage.

A clever 1-2 with Paxton Pomykal allowed Mendez to strike home his eighth goal of the tournament, after he slid home from close range.

Scott continued his strong performance in goal, keeping out a pair of good efforts from Mexico later in the half. Mendez missed out on a hat trick, rattling the left post with a beautifully taken free kick.

At the final whistle, the U.S. U-20’s got to celebrate over Mexico with a comfortable championship win.

Scott was awarded the Golden Glove for the tournament’s top goalkeeper, while Mendez tied the U.S. all-time record for most goals scored by a single player at the Concacaf Championship.

Ramos’ side will now head into a break before reconvening ahead of next summer’s 2019 FIFA U-20 World Cup.