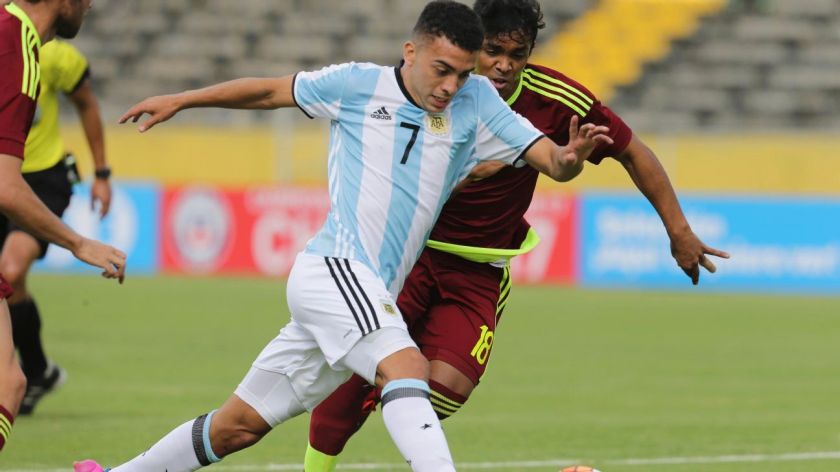 D.C. United added a dynamic piece to their midfield going into 2019.

The Black and Red have acquired Argentina midfielder Lucas Rodriguez on a season-long loan, the club announced Monday. D.C. will also send $50,000 of General Allocation Money to Atlanta United in exchange for the player’s discovery rights.

“We are excited to add a player of Lucas’ pedigree and experience to our roster ahead of the 2019 season,” Dave Kasper, United General Manager and VP of Soccer Operations, said. “At 21, he has been a consistent starter at the top level of Argentine soccer over the last three seasons and has both Copa Liberatadores and U-20 World Cup experience with Argentina. Lucas can play any of the attacking positions centrally and in wide areas, and has all the qualities to succeed in Major League Soccer. We are looking forward to welcoming Lucas to the team and having him represent the Black-and-Red.”

Rodriguez joins from Club Estudiantes with an option to buy after the end of the loan. In five seasons with Estudiantes first team, Rodriguez has scored eight goals and added five assists in 90 appearances. He featured for Argentina’s U-20 Men’s National Team at the 2017 FIFA U-20 World Cup in South Korea.

In what should be a busy offseason for the Chicago Fire, another notable name as made his way away from MLS.

De Leeuw joined the Eredivisie debutants on a one-and-a-half year deal with an option for another year. He joined the Fire in 2016, but only tallied 12 goals in 57 appearances while struggling with injuries.

Orlando City bolstered their attacking options heading into the new year with the signing of a former academy product.

The Lions signed University of Portland striker Benji Michel to a homegrown contract on Monday, with Michel becoming the fifth homegrown in the club’s history.

“We are very excited with the addition of Benji. Central Florida is one of the top areas in the country in talent, and we as a Club need to focus on grooming players like him to make sure they have a pathway in their professional careers,” said Orlando City SC EVP of Soccer Operations Luiz Muzzi. “Benji is an exciting player; we could not be any happier to have him come back home.”

Michel scored 31 goals in 53 appearances with the Pilots during his three years in college. He finished the 2018 season with seven game-winning goals, which ranked for third most nationally.

Prior to his collegiate career, Michel scored 25 goals for the Orlando City U-18’s in the U.S. Development Academy. He joins an attacking bunch that features veteran Dom Dwyer and 2018 Rookie of the Year finalist, Chris Mueller.