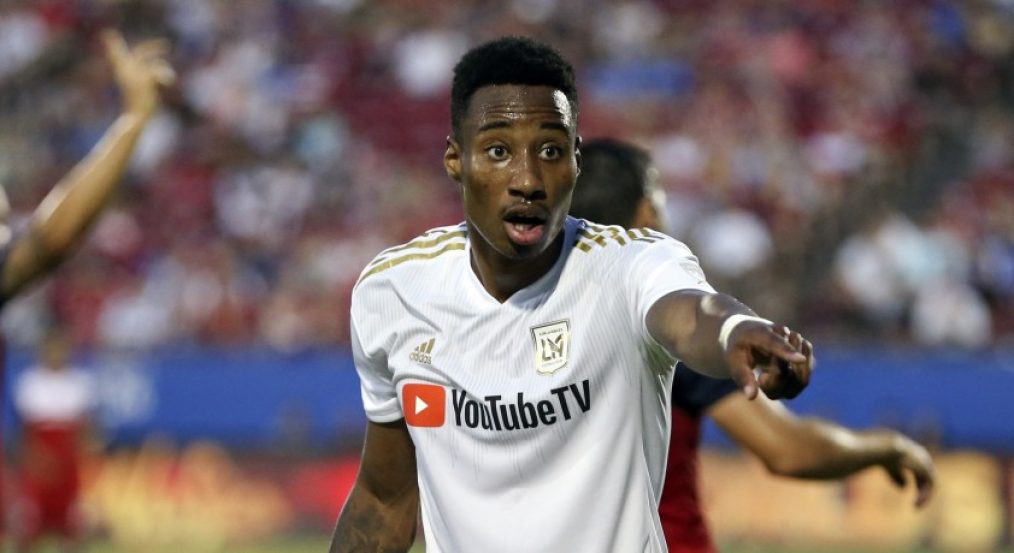 Canadian international Mark-Anthony Kaye will return to LAFC next season, after a midseason injury ended his campaign on a sour note. Kaye signed a three-year deal, the club announced, keeping another dangerous piece with the Western Conference club.

The 24-year-old has agreed to a deal through 2021 with a club option for 2022. Kaye appeared in 20 regular season matches for Bob Bradley’s side in the team’s inaugural campaign. He logged two goals and five assists, but suffered a season-ending injury on July 26th in a 2-2 draw against the LA Galaxy.

“Mark is a really important player for us,” Bradley said. “From the start he was open, he listened, and he applied our ideas. Before the injury, he was improving week by week. He has a bright future and I believe he will be back better than ever next year.”

Kaye signed with Toronto FC II in 2015, following a two-year collegiate career at York University in Canada. He later moved to Louisville City FC of the USL in 2017, where he featured in 39 matches across two seasons.

He has also has won six caps with the Canadian National Team.

The New York Red Bulls season came to a disappointing end last week and now Chris Armas’ side have begun preparations for 2019.

MLS Defender of the Year Aaron Long, versatile wingback Michael Murillo, and midfielder Derrick Etienne headlined the team’s roster moves on Tuesday, with all three seeing the Red Bulls exercise options on their contracts for next season.

However, six players saw their options declined while Long’s centerback partner Tim Parker is in negotiations with the club with himself out of contract.

Aurelien Collin, Ethan Kutler, Kevin Politz, Carlos Rivas all saw their options declined by the club while Marc Rzatkowski and Fidel Escobar were declined a longer stay following the conclusion of their respective loans.

The Red Bulls exercised the options on 11 players in total, while declining the options of six. Goalkeepers Evan Louro and Ryan Meara, defender Kyle Duncan, midfielders Vincent Bezecourt, Alex Muyl, and Florian Valot, and forwards Anatole Abang and Brian White all will be back with the Supporters Shield winners again next season.

Defender Tommy Redding is also out of contract.

For the second time in his career, Alan Kelly will be in charge of an MLS Cup.

Kelly, the 2018 MLS Referee of the Year, last was in charge of a final in 2016 in which the Seattle Sounders defeated Toronto FC on penalties. Referee of the Year finalist Nima Saghafi will be the fourth official for the game as well.

Saturday’s final will take place at 8 p.m. EST at Mercedes-Benz Stadium between Atlanta United and the Portland Timbers.

A familiar face has returned to the Philadelphia Union’s coaching staff after a brief stint away from the club.

Former Bundesliga goalkeeper Oka Nikolov returned to the Union as both an Assistant Coach and Director of Goalkeeping on Monday. Nikolov, a German-born Macedonian, previously served as a Union assistant in both 2016 and 2017, before spending last season as an assistant with the LA Galaxy.

“Oka is someone who I respect greatly, and all of our players and staff at the Union will benefit from having him return,” Union head coach Jim Curtin said. “I look forward to using his wealth of knowledge in what will be an expanded role as an Assistant Coach. Id like to welcome him back as we continue our preparation for the 2019 season.”

During his past time in Philadelphia, Nikolov helped Andre Blake develop into one of the top goalkeepers in MLS. Blake captured the 2016 MLS Goalkeeper of the Year Award as well as a Best XI campaign in the same season.

Nikolov spent the bulk of his career with Eintracht Frankfurt, while also spending one season as a player with the Union as well as the Fort Lauderdale Strikers.

Sims most recently was the Cleveland Cavaliers EVP of Franchise Operations, and chief revenue officer. He has also served in the NBA League Office as Vice President of team business development, team marketing, and business operations.

With the Cavaliers, Sims managed all primary areas of revenue. He is a 2015 Sports Business Journal 40 Under 40 honoree, a Leaders Global Under 40 Award Winner, and longtime soccer fan. He will take over for Jon Patricof, who is joining the club’s Board of Directors after his three-year contract will end in 2018.

“I am excited and honored to begin this leadership position at New York City FC and City Football Group,” Sims said. ” There’s no better time to be a part of soccer in the United States and NYCFC has quickly become a key pillar within the league. With the sport growing so rapidly in the U.S. and with City Football Group’s original global proposition, this is the place to be.”