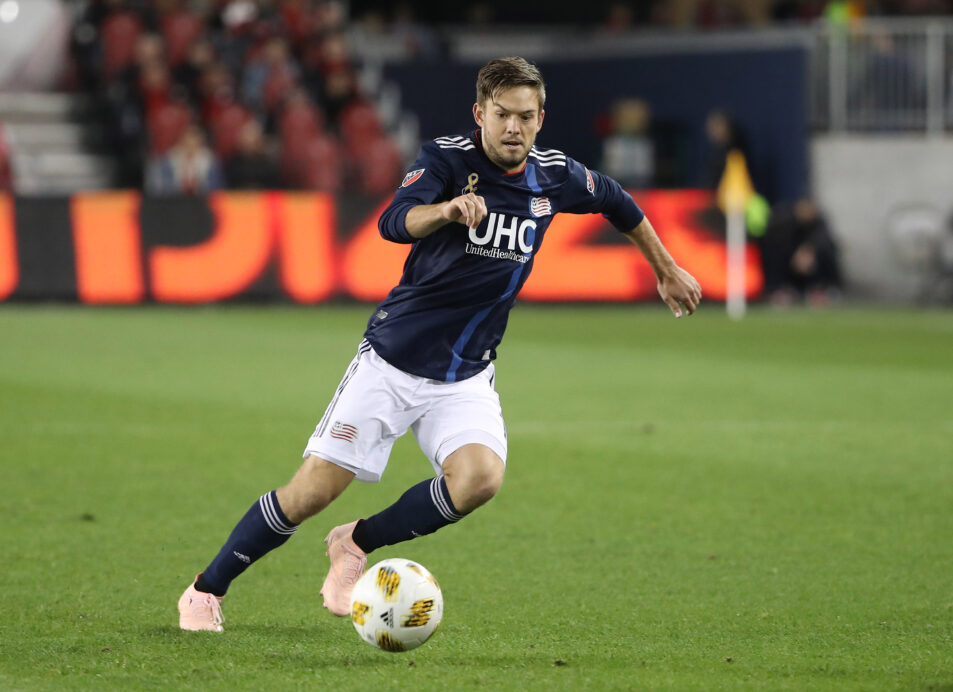 Kelyn Rowe’s future with Sporting Kansas City will likely see him playing in the middle of the park.

A day after trading for Rowe as part of a three-team deal, Sporting KC head coach Peter Vermes held a conference call on Wednesday morning in which he discussed, among several topics, where he plans to deploy Rowe in 2019.

Vermes acknowledged that the versatile Rowe has the qualities to play in the No. 7 and 11 spots out wide — where Rowe saw plenty of time while with the New England Revolution — but the manager stated flatly that he thinks Rowe is better suited to play centrally.

“I also think he’s got a lot of courage to get in the box, so I think in the middle of the park is where you’re going to see him. Whether he plays on the left or the right (of the midfield triangle), whether it’s called an 8 or a 10, it’s really all the same to me.”

Playing in the 8 and 10 spots might be significantly different experiences on some teams, but the two players in those positions in the three-man midfield Sporting KC usually adopts tend to play somewhat similarly. Vermes even said Wednesday that while the player in the attacking midfield spot might be positioned higher up the field than the box-to-box player, both are tactically required to do plenty of attacking with the ball and defending without.

In any case, Vermes thinks Rowe can fit either of those spots well and was pleased to have landed the 27-year-old midfielder after chasing him for much of the past decade.

“Kelyn Rowe is somebody that I’ve known for a long time,” said Vermes. “I followed him when he was in college, he’s somebody we were interested when he was coming out into the draft, and over the last couple of years, or many years, we’ve tried to at times get him but were unsuccessful, so this made for a great opportunity.

“He can play both inter-midfield positions and wide in the 7 or 11, but I think his best place is in the middle of the park.”

CLUB LOOKING TO POTENTIALLY BRING IN A STRIKER

Sporting KC made several moves in recent days to try and round out its 2019 roster early in the offseason.

Vermes revealed on Wednesday that he is looking to potentially bring in another striker to his squad. The 52-year-old manager did not reveal the names of any targets, but said there is a “good chance” that Sporting KC makes one more acquisition ahead of next year’s campaign.

“That will probably come a little later,” said Vermes. “It’s not something that’s going to happen, no way before Christmas, and it’ll probably be around mid-to-late January, early February.”

“It would most likely be a No. 9 or another No. 9,” Vermes added later when asked what position he was looking at for the next reinforcement.

Adding a center forward would certainly make sense given that Sporting KC has not had a consistent goal-scorer in recent years. Daniel Salloi, for instance, led the club in goals this season, but finished with just 11 tallies in 29 appearances.

Nonetheless, Sporting KC’s roster is close to being set.

“Outside of that, we have almost finalized our roster,” said Vermes.

NO “REAL OFFERS” RECEIVED FOR OPARA

It seems that severals teams are interested in acquiring centerback Ike Opara, but what they are offering for his services is not to Sporting KC’s liking.

Vermes provided an update on Wednesday with regards to the current situation with Opara, who asked for a raise following the conclusion of the season. Vermes said that Sporting KC is “not actively shopping” the 29-year-old centerback, but added that no player on the roster is untouchable.

The coach also seemed to hint at receiving some offers for the under-contract Opara, though apparently they have all been well below what Sporting KC values him at.

“Even in this situation, I’ll be honest with you, we have not received anything up to date that would be even remotely, remotely worth a conversation internally to decide if we would even move on it because no one has even made a real offer yet to us,” said Vermes. “When I say real offer, I’m not talking somebody coming to us with $100,000 in allocation money. That’s ridiculous when you see (Kendall) Waston just went for the numbers he went for, when you see (Walker) Zimmerman what he went last winter window from Dallas.

“When you look at those numbers, we haven’t even come close to anything significant like that.”

Additionally, Vermes stated that, contrary to reports, Opara never asked to be sent elsewhere and instead simply asked for a salary increase.

It does not seem, however, like Sporting KC will be able to satisfy that request.