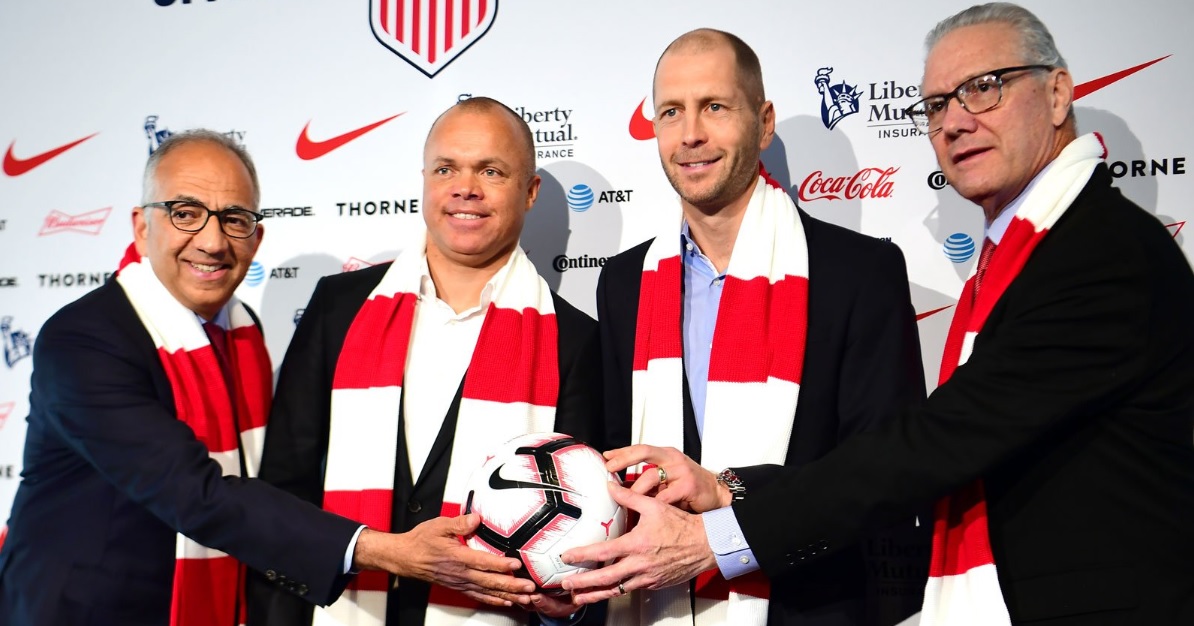 It certainly took a long, long time for U.S. Soccer to search for its new Men’s National Team head coach. Well, they finally have their man in Gregg Berhalter more than a year after Bruce Arena stepped down following the World Cup qualifying failure.

The length of the search has been a main target of criticism from fans and media alike. Many wondered why the USMNT had to spend such a vast amount of time under an interim boss and whether or not the lack of a permanent coach was beginning to affect the long term future of the team.

General manager Earnie Stewart and U.S. Soccer President Carlos Cordeiro didn’t wait long to defend their patience in Tuesday’s press conference introducing Berhalter. Both men got right to that in their opening statements.

“Earnie started work on August 1st, just over three months ago. He hit the ground running and over the three months that he was there, that he’s been with us, he’s led a very clear, thorough, professional search,” Cordeiro said. “In fact, with Earnie looking at an initial field of more than 30 candidates, it’s probably been the most inclusive and comprehensive search for a coach in our history.”

Stewart, too, went into some detail to defend the length of the search and talked about how thorough that process actually was. He did his homework, for the most part, as he narrowed down that vast initial field to Berhalter when all was said and done.

“The way I went about my business was to make sure that we set the profile of what a head coach would look like,” he said. “Style of play was important because when I sat with candidates and was able to sit down with Gregg it explains kind of like where we’re going and what we’re trying to do.”

Once he established a profile on what sort of guy he was looking for, he set out to finding candidates. Stewart originally had a shortlist of 33 names from around the world as possibilities. He and his committee were able to narrow that down to 11 candidates. After another broad sweep of the established requirements, that field was further narrowed to five names, but three of those stood out from the rest.

Stewart didn’t name any names, but he did mention one of his finalists not being available due to taking another job opportunity. Stewart, along with Cordeiro and CEO Dan Flynn, proceeded to meet with both remaining candidates. After what Stewart called a “short period of time,” he officially recommended Berhalter and the choice was unanimously approved by the U.S. Soccer board.

Although, he looked far and wide for the right head coach, Stewart and his team didn’t personally speak to every one of those original ideas. He instead resorted to the eye test for many of them, simply eliminating them based on how they coached in their current jobs.

“I’d like to say there’s a lot of coaches that I spoke to,” he said, “I’d say within MLS, there were also some international candidates, two candidates from Holland, that I did not necessarily need to speak with. Because you see them on the playground every single day. You see what they’re doing with their team, you see how they’re trying to implement their style of play. I didn’t feel it was necessary in the first part to get a score on that.”

There were still some key details left out. Stewart didn’t explain how long anything actually took from the moment he got hired in August. Cordeiro did put emphasis that the board only approved the decision this past Saturday, but the federation likely had to wait until the Columbus Crew finished their season to truly open up negotiations with Berhalter. No details were shared about when he was actually chosen.

Regardless of the length of his search, Stewart certainly convinced Cordeiro and the rest of U.S. Soccer leadership that Berhalter was the right man to lead the USMNT into the future.

“Gregg isn’t just the right choice, Gregg is the best choice,” Cordeiro said to conclude his opening statement. “He will push our Men’s Team forward and with an identity and approach that will be uniquely and fiercely American.”