That’s the internal message Orlando City has used in the buildup to the 2019 Major League Soccer season.

The Lions have put the disastrous 2018 campaign in the rearview mirror, and they’ve done so by reworking the roster, with Portuguese winger Nani being the high-profile addition to the group.

“The locker room is much better than it was last year,” Kljestan said. “I think we’ve added some pieces and a lot of guys who have done well to integrate themselves into the group. I think the group is very tight-knit, which is good. Right now, we’re feeling very good about ourselves and are excited to get the season started.”

Kljestan, Will Johnson and Dom Dwyer form a veteran core of returners that’s hoping to combine with the additions to earn the club’s first-ever playoff berth, which is in high demand after the way the last few seasons have ended in central Florida.

“Of course, not only for the fans, but for all of us, we don’t want to be part of another losing team,” Kljestan said. “That’s a black mark on our careers. We want to do very well and everyone’s got the right mentality. Now it’s about putting it all together.”

Here’s a closer look at Orlando City heading into the 2019 season: 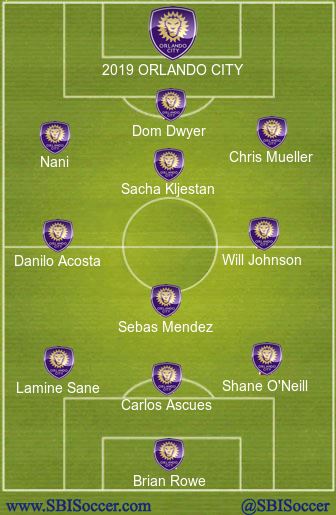 Before Nani was signed, we could’ve filled this space with a handful of new players hoping to make an impact on the club.

But whenever you sign a European Championships winner and a former Manchester United player, he has to be the main attraction in the lineup.

How Nani fits into the squad will be intriguing to watch from the outside, but his teammates are already relishing playing on the same field as the 32-year-old.

“He’s played at a high level for a long time,” Kljestan said. “I think it’s pretty obvious he should make our team better in the attacking third. It’s exciting for me to play a little bit behind him and try to connect those dots and get him the ball in places to succeed.”

Pressure Is On: The Entire Defense

There’s no reason to single out one Orlando City defender when the entire unit needs to improve after conceding 74 goals a year ago.

The Lions will be fielding a new-look back line with Danilo Acosta, Ruan, Joao Moutinho, Alex De John and Kyle Smith among the players looking to make improvements in front of goal.

Orlando will also be using a new goalkeeper after letting Joe Bendik and Earl Edwards Jr. go in the offseason.

Bringing in a new back line was necessary given last season’s struggles, but if the chemistry isn’t there from Week 1, the Lions could be in some trouble.

Once again, it’s playoffs or bust for a team with a fan base desperate to taste the postseason.

“The fan base here is great. For the most part, they’ve stuck behind the team for some poor season for the past four years,” Kljestan said. “We want to deliver the playoffs because we also know that if we get there, the atmosphere during the playoffs is going to be top notch.”

“They’ve been very supportive and you saw at the beginning of last year when we were winning a lot of games that coming to play at Orlando City is tough for opposing teams just because it’s pretty intimidating and loud and the atmosphere inside the stadium is really good,” Kljestan said.

Outside of Kljestan, Johnson and Dwyer, the majority of the key contributors on the Orlando roster are new faces.

In addition to the new back line, Tesho Akindele is expected to provide scoring depth, while Jhegson Sebastian Mendez should boost the overall talent in midfield.

Akindele’s received some rave reviews from his attacking teammates after coming over from FC Dallas in a trade in the offseason.

“Tesho Akindele is a player I didn’t know much about,” Kljestan said. “He was in the Western Conference and I’ve been in the Eastern Conference since I got back from Anderlecht. We only play FC Dallas once a year. Not watching them play a ton over the past few years, I just didn’t know what he was all about.”

“I think he’s proven to be not only a very good teammate, but a very solid player who I think we’re going to depend on a lot this year to play a lot of minutes and hopefully get us goals,” Kljestan said. “He’s fit in with the group really well and he’s a good finisher and a smart player and I think he really enjoys the game and is trying to learn every day and get better. I think from all standpoints, Tesho has impressed me a lot.”

If everything comes together for the Lions, they have a chance to make the playoffs, but after last season’s collapse there will be doubters circling the club until it can string together a consistent run of results.