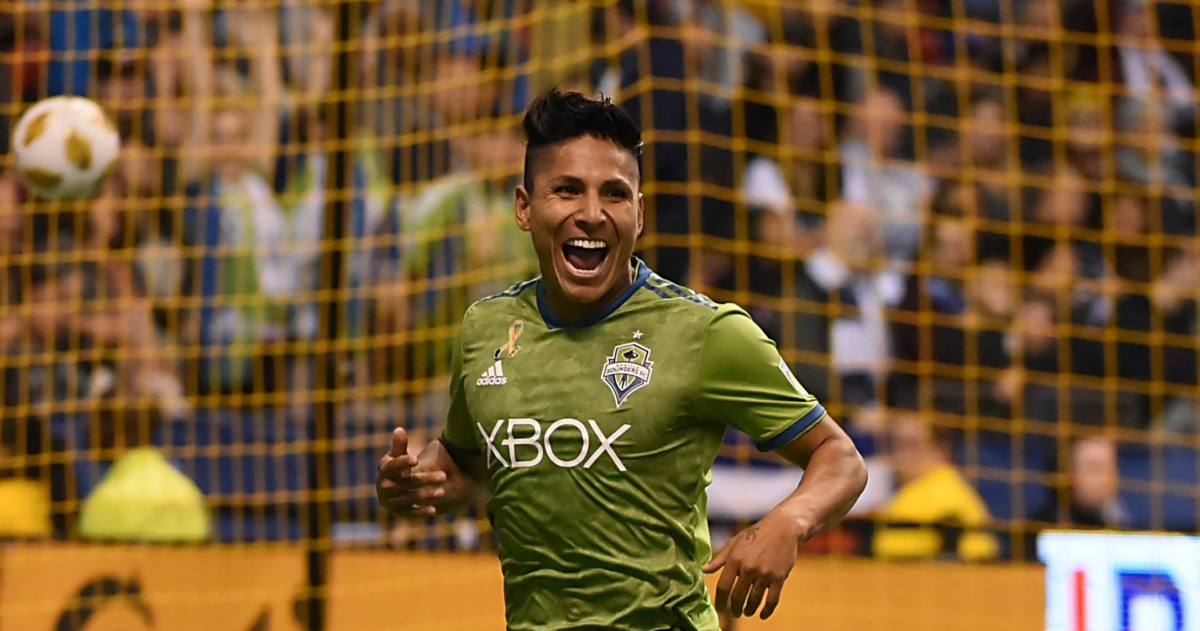 After failing to reach MLS Cup for the first time in three years, the Seattle Sounders are trusting that rest, health, the return of Jordan Morris, and a full year of star striker Raul Ruidiaz will be enough to return them to the league final in 2019.

The Sounders were ousted from last year’s Western Conference semifinals by the Portland Timbers, falling short of the conference finals for just the second time since 2013.

The Sounders once again stumbled out of the gate before posting a best-in-league-history 14-2-1 record over the second half of the season, putting together a nine-match winning streak (another league record) in the process. And they were only eliminated by that quirkiest — if most painful — of means, the penalty shootout.

In other words, the Sounders perhaps have good reason to believe that if they can stay healthy (knock on wood) they can contend for MLS Cup with much of the same cadre that went undefeated from mid-July to mid-September of last year.

The only notable loss is holding midfielder Osvaldo Alonso — team captain, last remaining member of the Sounders’ 2009 expansion side, and the most important player in club history. A free agent, the 33-year-old Cuban opted to ply his trade for Minnesota United. Cristian Roldan and Gustav Svensson will jointly share the challenge of replacing his defensive tenacity, his passing efficiency, and his incomparable work rate.

There were no major offseason acquisitions. Garth Lagerwey, the Sounders’ general manager and president of soccer, enjoys a good deal of financial flexibility and a vacant designated player slot to address needs as they arise. Both he and head coach Brian Schmetzer have indicated additions are possible before the close of the league’s primary transfer window in early May.

Those bored by all the stability might keep an eye on the bottom of the 30-man roster. While the Sounders have never been known as a “play their kids” organization in the manner of an FC Dallas, 2019 might be the year that begins to change. The Sounders have spent more heavily on youth development in recent years, and it paid off last season with the club’s first U-17 national title.

The organization not only signed eight players from that team to its USL outfit, it also trotted them out over the course of an MLS preseason that at times saw the senior team fielding 10 teenagers. Promotion for at least one or two does not seem unrealistic. Keep an eye on 15-year-old Danny Leyva in particular.

More than anything, perhaps, the Sounders are hoping to avoid digging themselves into an early season hole for a fourth straight campaign. In the last three seasons, the Sounders have found themselves with midsummer records of 3-9-3 (2018), 5-7-6 (2017), and 6-12-2 (2016). The rallied their way into the playoffs each year, but the goal is to finally have some consistency. 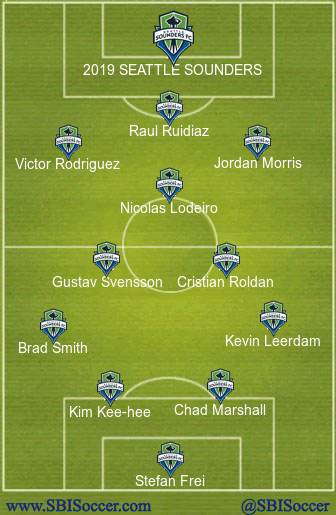 Slim pickings here. Goalkeeper Trey Muse could be a huge acquisition in the long-term. Signed in January as a homegrown player, the 19-year-old Indiana University product was considered the best college goalkeeper in the country and is talked about as a potential future starter for the U.S. national team. But for now Muse will likely see minutes with the Tacoma Defiance, the Sounders’ recently rebranded USL side.

Campbell, a fourth-year center back acquired from the Chicago Fire in December, figures to play more of a first-team role than Muse this season. The Sounders declined their contract option on 2016 draft pick Tony Alfaro in the offseason, leaving Campbell and Roman Torres to provide depth behind Kim Kee Hee and Chad Marshall in central defense.

Campbell could well find himself logging minutes in important matches. There are more three-game weeks in the league’s new schedule, and both Torres and Marshall are over 30 with significant injury histories. A 2016 first-round draft pick, Campbell’s minutes dwindled over the past two seasons, but he started 30 matches in a solid rookie campaign. He is an upgrade over Alfaro.

THE PRESSURE IS ON: Jordan Morris.

Isn’t it always, somehow? When he came out of Stanford, Morris was the most highly-touted American prospect in years. After a slow start, he didn’t disappoint, delivering 12 goals and four assists while earning the league’s Rookie of the Year award in 2016. Injuries and sagging confidence marred his sophomore campaign, limiting him to three goals and a lone assist in just 22 starts. He looked rejuvenated in preseason last year, then missed the entire MLS campaign after tearing an anterior cruciate ligament in a CONCACAF Champions’ League match. Whether Morris returns to peak form, and whether he adjusts to playing right midfield (where Schmetzer has been starting him this preseason) are two of the few unknowns on a stable roster.

If the Sounders’ 2019 game plan sounds familiar, it should: It is the 2018 game plan, dusted off and reissued with nary an edit. (OK, Lagerwey has ticked ‘add an elite striker’ off his to-do list from last season.) This is an organization that still believes — with some good reason — that it is the team that lost a total of four games after the Fourth of July in the last two years combined. That it is not the team that started those seasons 8-16-9 as it battled countless injuries.

Time will tell if the Sounders’ injury woes finally fade in 2019, but perhaps a longer offseason bodes well for a healthier start to the campaign. Following back-to-back MLS Cup appearances, the Sounders enjoyed a mere eight weeks off from January 2016 to November 2018.

The Sounders are still coached by Brian Schmetzer, so the Sounders will still play primarily out of the 4-2-3-1, the coach’s formation of choice since taking over for the late Sigi Schmid in mid-2016. There has, however, been a noticeable emphasis in the preseason on building from the back more frequently.

Along the back line, the underrated Kelvin Leerdam, 28, returns at right fullback. Third-year UNC product Jordan McCrary provides depth, and Henry Wingo may seem time as well. Saad Abdul-Salaam, who started 26 games at right back for Sporting Kansas City in 2016, has also participated in preseason as an unsigned trialist.

At left back, Australian international Brad Smith, signed on-loan from AFC Bournemouth with TAM money last summer, gets the nod over Nouhou. The speedy Liverpool academy product looked dynamic in six starts last year before missing the final month of the season (and the playoffs) with a hamstring injury. Smith’s loan ends in July, though it could be extended. The Sounders parted ways with left back Waylon Francis in the offseason, sending him to the Columbus Crew for $50,000 in General Allocation money.

Kim Kee Hee, 29, and three-time MLS Defender of the Year Chad Marshall, 34, return to make a formidable pairing at center back. Marshall is returning from a torn meniscus picked up in last season’s playoffs, but has looked solid in preseason matches. Torres, 32, and Campbell, 25, provide depth.

The Sounders will surely miss Alonso, but his departure does create space in a midfield overflowing with talent. It also allows Roldan to shift from right midfield to his more natural position in the heart of the park. Svensson will protect the back line alongside Roldan, offering a rugged presence, a high IQ, a big-game mentality, and the ability to deliver the occasional goal and assist.

Victor Rodriguez, designated player Nicolas Lodeiro (8 goals and 16 assists in 2018), and Jordan Morris round out a starting midfield dripping with talent. Based on glimpses last season and in preseason friendlies this year, the left side of the Sounders’ attack could prove the most lethal in MLS, with Smith overlapping to combine with Lodeiro, Rodriguez, and Ruidiaz. Promising second-year player Handwalla Bwana, Harry Shipp, and Alex Roldan will provide spot starts and depth.

Ruidiaz, a 28-year-old Peruvian international, begins his first full campaign in the Emerald City looking every bit the Golden Boot candidate. The designated player joined the Sounders in the summer from Morelia, where he led Liga MX in scoring for two straight years. He scored 10 goals in 14 starts for the Sounders, including five game-winners. Will Bruin will serve as a capable second-string forward looking to build on his 68 career goals. The longtime Houston Dynamo forward has netted 18 times across two seasons for the Sounders.