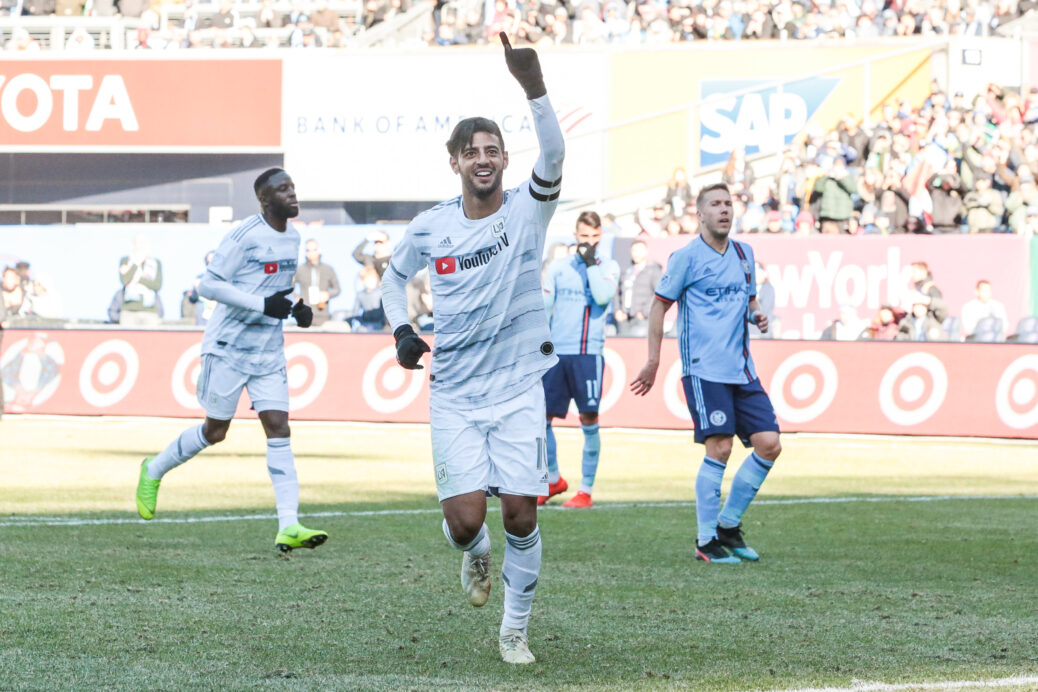 BRONX, N.Y. — Carlos Vela said earlier this month that he wants to be the MLS MVP this season.

Well, he certainly helped his cause this past weekend.

Vela was a standout performer for LAFC on Sunday afternoon, bagging a brace that helped the club pick up a road point in a 2-2 draw with New York City FC. Vela’s two goals came on each side of halftime and both pulled LAFC level in the match to prevent the Western Conference power from tasting defeat for the first time in 2019.

“Carlos is such an important player and what I really like is that in certain situations now, he’s on the move more,” said LAFC head coach Bob Bradley. “Last year there were times, especially in the second half of the year, where he would come back, he wouldn’t play simple enough and he would end up just wrestling with defenders and wasting energy far away from the goal.

“As a team, I think we’ve improved in the way we’ve moved the ball, our attacking ideas get better and we’re able to get him the ball more on the move. He also makes better decisions when it’s not the right time to try to dribble, so for me those are positives.”

The 30-year-old Vela certainly made his share of good decisions at Yankee Stadium, especially in front of goal. The Mexican’s first major contribution came on a quick counterattack four minutes after LAFC conceded, as he received a through ball in space from Latif Blessing following an errant pass from NYCFC defender Maxime Chanot.

Vela punctuated the play by being direct and racing towards goal, holding off a last-ditch effort from diminutive NYCFC winger Alexandru Mitrita and firing a shot low and into the back of net past goalkeeper Sean Johnson. Vela then celebrated his tally with a homerun swing.

The star attacker’s second goal may not have resulted in as cheeky a celebration, but it did pull LAFC level once again. Vela converted from the spot with 14 minutes to play, firing a low shot to the left that was not well hit but that went in due to Johnson’s incorrect guess on the shot placement. A smiling Vela celebrated that strike by pointing to the traveling LAFC contingent in the second level of the stadium, and then embraced his teammates.

“I am trying to be the leader of this team, and in situations like that on not good days and not good moments, I have to be there for my team,” said Vela. “I am working hard to improve every day and I am trying to show every game that I am at a high level.”

Vela has demonstrated just that through the first three matches of the season. The LAFC playmaker has scored three goals, delivered two assists, and taken a total of 17 shots while playing all 270 minutes of the club’s three matches.

While things are going well for Vela at the club level at the start of the 2019 season, they could be better on the international stage. Vela was not called in by Mexico’s new head coach, Gerardo ‘Tata’ Martino’ for this month’s friendlies against Chile and Paraguay, leaving many El Tri observers to question why the veteran attacker has not been included in the plans.

Vela is not overly concerning himself with that, however. His focus right now is on LAFC, and on continuing to deliver standout performances like the one he enjoyed on Sunday afternoon.

“When I’m there, they kill me. When I’m out, they want me there,” said Vela of Mexican press. “It’s never a good thing (about me), but I’m focused on my team and trying to play well every weekend, and then send a good luck for all the players that are in the squad.

“I hope they will take the chance and do well the job and, of course, always I want Mexico to win.”