Earthquakes establish themselves as worst in MLS following disaster against LAFC 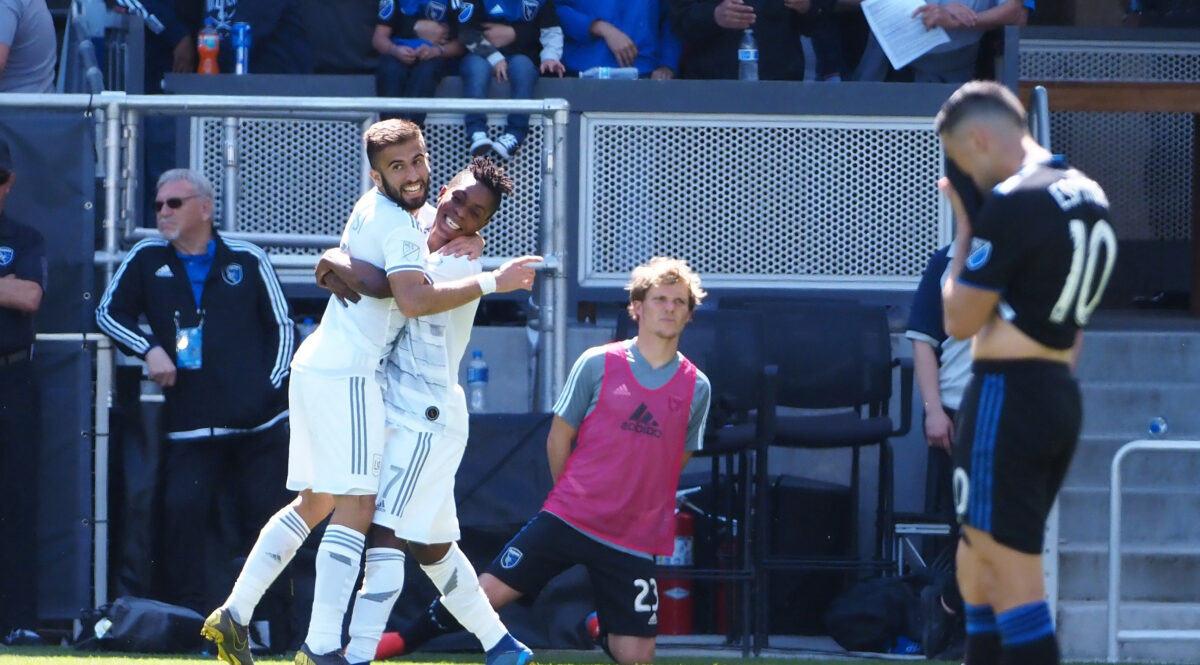 When it rains, it pours. And in Saturday’s “first vs. worst” match, it poured hard.

It wasn’t bad enough that Earthquakes goalkeeper Daniel Vega whiffed on what’s normally a routine clearance, but Carlos Vela not only walked the missed ball to the goal-line, he walked it halfway across the line, then passed it in for the official goal.

It wasn’t bad enough that Vela netted a hat trick on the day with the third goal coming on a highlight-worthy curler to the top corner from distance.

It wasn’t bad enough that the hometown kid Steven Beitashour, a San Jose native who used to be a ballboy for the original MLS iteration of the Earthquakes, and the previously named San Jose Clash, scored on his hometown club.

If it wasn’t bad enough before the Earthquakes 5-0 loss to LAFC on Saturday, it’s bad enough now.

“Honestly, the game was disastrous,” Earthquakes head coach Matias Almeyda said in his post-game presser. “We knew the quality of our opposition and they marked the major difference between the team in first and the team in last, so there is a big difference.”

LAFC ran over and through the Earthquakes’ backline throughout the day, a backline that saw Tommy Thompson and Shea Salinas get the starts in relief at the full back spots over Nick Lima and Marcos Lopez, respectively, due to international duty.

Harold Cummings and Guram Kashia had no answer to stop any threat from LAFC, whether it was Vela, Diego Rossi, or even centerback Walker Zimmerman, who looked to score his second goal in as many weeks.

“We weren’t good enough today, it’s as simple as that,” Thompson said.

The 5-0 loss, properly dubbed “Cinco-cero” as chanted by the LAFC traveling supporters, was the worst loss by the Earthquakes at Avaya Stadium since it opened back in 2015. It was the second time in as many years they allowed a team to score five goals at Avaya since losing 5-1 against Sporting Kansas City last September.

This is the first time in franchise history that they’ve opened a season with four straight losses.

To make matters even worse, the Earthquakes’ attack was once again non-existent. Chris Wondolowski was again a non-factor in the front as he remains stuck just two goals shy of breaking Landon Donovan’s record. Vako was just as non-existent and Cristian Espinoza, who had that stellar first-half two weeks ago in the loss at the Red Bulls, was shut down on the wing as well.

“If we come up with a game plan, we need to execute it a little bit better,” Wondolowski said. “We need to have a better attitude, a better mentality, and we have to do the little things a lot better – whether it’s connecting passes, easy passes that we miss, or tracking runners.

“This is a great teaching moment in the sense where we played an excellent team in LAFC. They came out, and their coach, [Bob] Bradley, he definitely had a game plan. He’s a great tactician, and I think they executed it. I’ve been able to play for both of them [Bob Bradley and Matias Almeyda], and I think they’re the two best tactician coaches I’ve played for. We didn’t execute it and that’s the difference.”

San Jose finds themselves with four straight losses to open the season, yet, that alone isn’t the worst part.

The Earthquakes are the only team in MLS yet to record a point in the standings despite not being the league’s lone winless side – Colorado, Vancouver, Portland, Atlanta United and New York City FC have all recorded at least one draw – and now own MLS’s worst goal differential at -12. The 14 goals conceded is the most by anyone in MLS while the two goals scored ties them with Atlanta United for the fewest in the league.

The worst part is that while it’s beyond clear that this team is in rebuild mode, there’s still no clear sense of direction to where the club is heading – besides further down.

They’ve proven that they can’t individually handle Almeyda’s man-marking system, one that they’re trying to learn, and have shown repeatedly that outside of the two goals scored on the season, this team can’t create nor score.

In a year where everyone expected and hoped for some sort of improvement, they have shown regression.

Almeyda has taken responsibility for the struggles, but he’s struggled himself to find an answer, or anything close to it. And at the moment, that part makes the start to this process outright terrifying.

“I think I have given a lot of time out of respect that I have for the players and now my mind will continue to spin until I have found the team that I have obviously not found,” he said. “So that means that the first one at fault is the head coach, which is me because I am taking too long to find the team.”