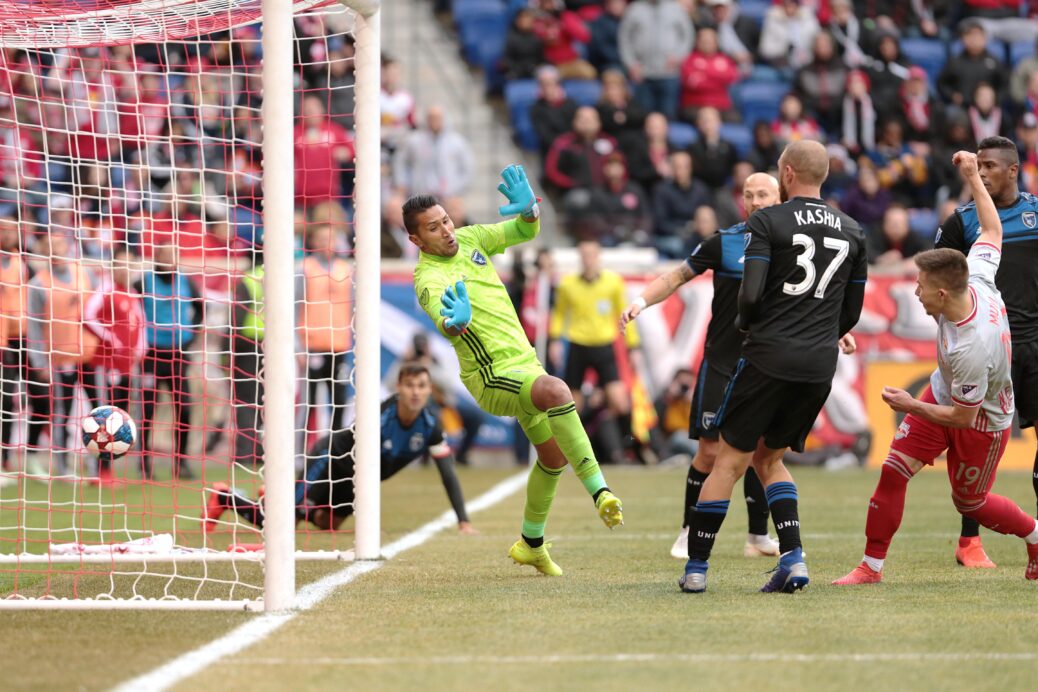 The worst thing to happen for the San Jose Earthquakes in the first month of the season is … the second half of matches.

For the third straight time in as many games, the Earthquakes fell apart in the second half, this time in a 4-1 loss at the New York Red Bulls.

Matias Almeyda may have a system that he wants to install, but the results haven’t arrived and don’t seem to be coming anytime soon despite the effort.

“We are looking to win, establish our playing style and build mentality,” Almeyda said after the match. “It’s going to take a while.

“It’s not easy to change the style of play after the team is accustomed to a different one. We want to fight for the ball, mark zones and be the protagonists in each game. In the first half (at Red Bulls), we were able to do that. If we are able to maintain that for longer, the team will be able to get out of the hole that we are in.”

Alex Muyl came into the game for the Red Bulls for an injured Florian Valot late in the first half and scored a brace off of the bench. Bradley Wright-Phillips and Daniel Royer scored a goal each in the final 10 minutes to keep the Quakes winless. All four of the Red Bulls’ goals came in the second half

To Almeyda’s credit, the Earthquakes have started matches on a solid note. They took both the Montreal Impact and Minnesota United to a 1-1 and a scoreless draw at the half respectively before falling apart in the second half.

Saturday saw more of the same from the Quakes in the first 45 minutes. Cristian Espinoza sparked the Quakes with a goal to the far post, taking in a perfect pass from Magnus Eriksson, beating Luis Robles in the net in the fifth minute, giving the Quakes the early 1-0 lead.

The Earthquakes were able to handle the Red Bulls aggressive press as Espinoza had a solid first half, beating defenders on the right wing and he nearly set up Vako with crosses to the far post for what could’ve been a second or even a third goal in the first half. Vako missed those pair of tap-in goals at the post.

San Jose has scored just two goals all season so far, the second being Espinoza’s fifth-minute goal on Saturday.

Then, once again, came the second half.

Of the nine goals that the Quakes conceded so far this season, eight have come in the second half, highlighted by the four-goal barrage from the Red Bulls on Saturday.

Almeyda’s new defensive system has seen its share of flaws on numerous accounts in these first three matches. Lima was beaten by Saphir Taider for the go-ahead goal in the season opener against Montreal – although the goal looked close to actually being offsides after much further review – and Harold Cummings and Judson struggled to fully contain their assignments against Minnesota United last week.

In Saturday’s loss, Tommy Thompson, who got the start at right back, failed to get to Royer to try to stop Muyl’s first goal after Vega deflected Wright-Phillips initial shot from distance, then Muyl got in good position in front of Guram Kashia at the far post for his second goal off of another cross from Royer, which put the Red Bulls ahead.

Wright-Phillips easily stepped in front of Marcos Lopez for the easy tap-in goal off of a cross from Sean Davis at the near post in the 84th minute. And to seal it, Michael Murillo beat Lopez to the wing to send a cross into Royer who was left alone in the box until it was too late by Thompson in the 89th minute.

All four of the Red Bulls goals were crossed into the six-yard box and shot on the first touch, in front of goalkeeper Daniel Vega who had no chance at making any of those saves.

“Of the nine goals that we have conceded, not one has been because of our opponent’s virtue,” Almeyda said. “It’s because of our mistakes. This means that we need to keep working to get where we want to be.”

“We got relaxed on our marks and (Red Bulls) are extremely deadly and lethal,” Wondolowski added. “When they get a little bit of room, they punished us as they should.”

The Earthquakes have two weeks to get themselves a bit more comfortable in Almeyda’s system defensively before LAFC comes into town for a crucial, and tough, Western Conference matchup on March 30. They’ll have time to work on it this coming week with a friendly against Mexican side C.F. Monterrey this Saturday.

San Jose might be looking to change its culture – attitude, tactical system and all that comes with it – but the beginning to any drastic, potentially long-term change is dealing with the growing pains, which San Jose is facing right now in the harshest way possible. The Earthquakes have been able to start strong, but are unable to finish, which in turn, has them unable to win.

“It’s a process and there are things we have to go back and look on,” Lima said. “We are all working as hard as we can and that’s what we have to continue to do day in and day out.

“It’s going to take work from the whole team and guys are working hard and we can see it and that’s what we’re going to continue to do.”