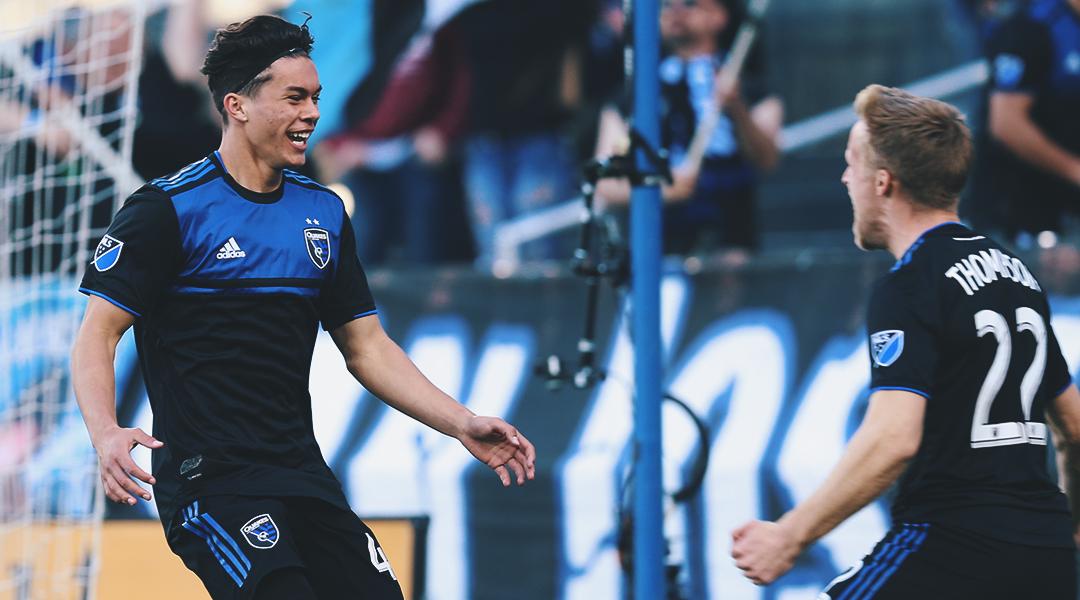 To sort of steal a line from the late Oakland Raiders’ owner Al Davis, “the greatness of the [Earthquakes] is in its future.”

If those nine words hold true then maybe, just maybe, in spite of what already looks like another bleak season for the rebuilding Earthquakes, they might’ve found a small bright spot in a 2-1 friendly loss against Liga MX side C.F. Monterrey on Saturday.

In the 59th minute, 15-year-old Cade Cowell, San Jose’s fifth and most recent Homegrown signing, made his Earthquakes debut at Avaya Stadium, subbing in with fellow Homegrown signings Gilbert Fuentes and Tommy Thompson. Two minutes later, Cowell tapped in a cutback pass from Thompson on the first touch past Monterrey keeper Luis Cardenas for his first professional goal.

It was easily a career highlight for the 15-year-old and should probably be taken with a grain of salt considering this was in just a friendly. But for the Earthquakes, a club currently in rebuilding, it was a glimpse of what could be a bright future ahead.

“[Cowell]’s a 15-year-old player. He’s very young. I gave him and Gilbert [Fuentes] some time today and it’s only their first steps in a senior team at the professional level,” Earthquakes head coach Matias Almeyda said. “They have the best example in front of them, a historic goal-scorer in Chris [Wondolowski]. In a year-and-a-half, this team will be totally different.”

On a day where the Quakes first team struggled to really create anything in the attacking third, notching just a lone shot on goal – a header by Wondolowski that was saved by Monterrey keeper Marcelo Barovevo to force a corner in the 34th minute – the youth of the Earthquakes gave the club some life in the second half highlighted by Cowell’s goal.

Both Cowell and Fuentes, along with second-year midfielder Eric Calvillo, helped the Earthquakes create the chances in the attacking third that the Starting XI wasn’t able to and added a bit of grit and attitude that also wasn’t seen in the first half.

“I thought there were some bright signs,” Wondolowski said. “There’re definitely some mistakes that we still need to fix. We need to continue to keep building, continue taking the right steps. It’s still not a result that we wanted.

“I thought (Cowell)’s goal was well deserved, great run, great ball by Tommy as well. I thought Tommy sent the ball in well and Cade made a great near-post run, something that we have been working on. He’s going to have a bright future, he’s going to continue to grow as a player and I’m proud of him.”

Since Jesse Fioranelli took over as the club’s general manager in 2017, the San Jose Earthquakes have signed four Homegrown players bringing their total to five  – Thompson was the first Homegrown player for the club but signed in 2014, three years before Fioranelli took over. The current role of the Quakes’ Homegrown players isn’t about producing now or guiding the club out of its current struggles. Their role is to continue to develop and prepare for the future of potentially carrying the club when it’s their time.

If Saturday’s friendly was a test for both Cowell and Fuentes, it’s safe to say that they passed.

“They’re continuing to grow,” Wondolowski said. “It’s great to see them with confidence and get out there and get some of these minutes. I think it’s very important for them to continue to grow and they’re definitely on the right path.”

Almeyda is making sure that he doesn’t pressure the young Earthquakes just yet, drawing back from his experience as an 18-year-old professional debutant at River Plate while also explaining his ideas for mentoring the youth.

“It’s nice to see the younger players,” Almeyda explained. “I got tired of seeing how younger players were burnt out. I think there are moments, but we need to be careful of when we can put them in and let them go when they are ready.

“The moment San Jose is facing is difficult because they only won four games last year, and the youth should not carry the weight of changing the club. We need to go step-by-step with the younger players and develop them into ambitious players that really know the system of play and know the lifestyle of a soccer player, and from that point don’t burn them out. Our objective in a year to a year-and-a-half is to have many young players, and they should know what they play, how to play it, and why they play it.”

“Generally I want them to play for love. Not just because they want to be famous, or because they want to be millionaires. One of our younger players has a nice car, we can’t say the mark or brand. I don’t like that. When I got here, he already had it. If I was here, I wouldn’t allow that. That’s the way to have a football player live in reality. Because the car doesn’t have bedrooms or bathrooms. Or else he has to get an Airbnb.”

It’s unclear whether the Quakes’ young Homegrown players will hit the pitch again later this season in MLS play, however, Almeyda didn’t necessarily rule it out.

“I’m not going to throw in Cade every match,” Almeyda said. “Maybe I’ll throw him in in six months.”