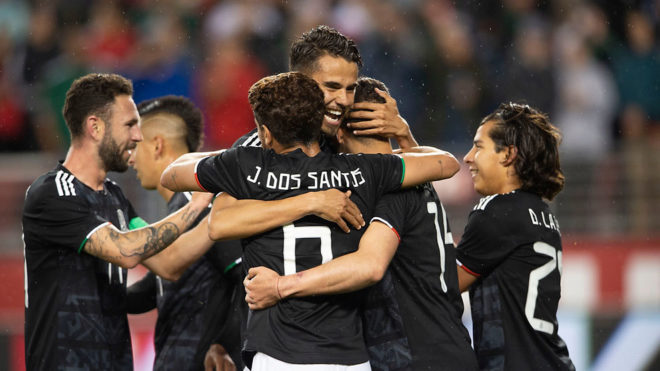 Tata Martino made it two wins from two as new boss of the Mexican National Team.

After an easy victory over Chile last week, the former Atlanta United head coach saw his side hang on for a 4-2 triumph over Paraguay in San Francisco. Javier Hernandez and Jonathan Dos Santos each found the back of the net for El Tri while Miguel Almiron was sent off for the Conmebol side.

El Tri flew out of the blocks in the opening half, eventually holding a 3-0 lead at halftime. Dos Santos’ opened things in the sixth minute before an own goal from Gustavo Gomez extended the hosts advantage.

Chicharito made it 3-0 in the 24th minute which looked to have put Mexico in cruise control for the remainder of the match. However, Paraguay had other ideas after the interval.

GOAL Mexico! In the stadium where #ElTri fell to Chile 7-0, Chicharito gives Mexico a 3-0 lead over Paraguay 24 minutes in. That's 51 career international goals for Javier Hernandez

Hernan Perez pulled one back in the 59th minute, five minutes before Almiron saw a straight red card for a lunging tackle on Jose Juan Vazquez. Derlis Gonzalez’s finish in the 85th minute made the end of the match interesting before Luis Montes iced the win in stoppage time for Mexico.

Raul Gudino made one save for Mexico in what proved to be an entertaining match at Levi’s Stadium.

El Tri is now 2-0 under Martino and will next be in action this June against Venezuela and Ecuador.