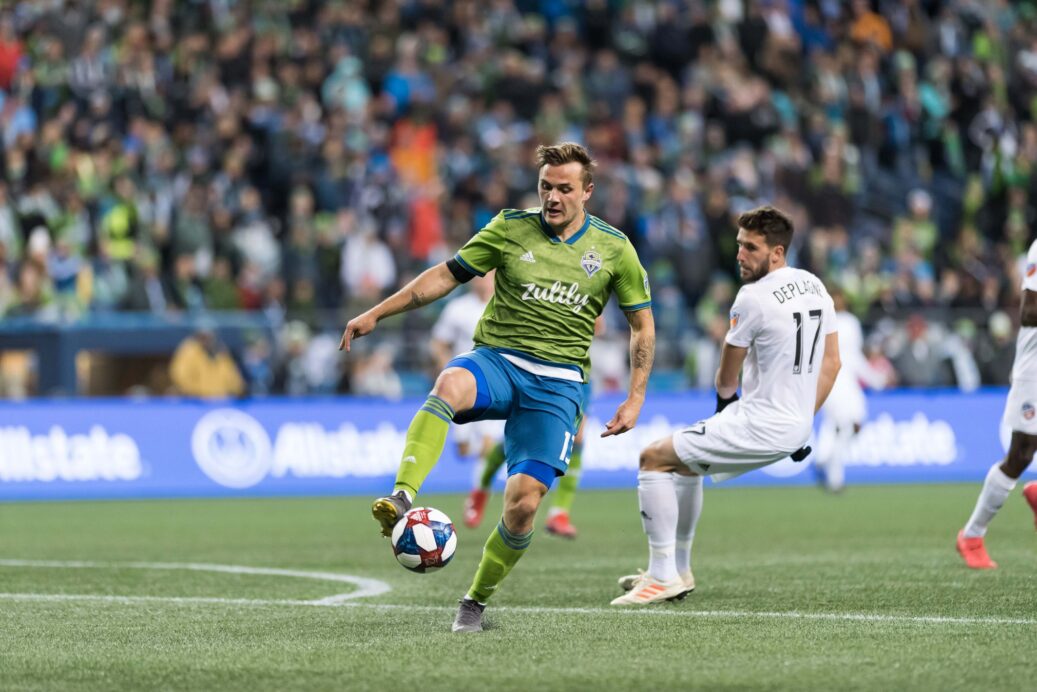 SEATTLE — A legendary coach was honored. A star player returned from a yearlong absence in stunning fashion. A humble expansion side was presented for slaughter. Maybe a few demons were vanquished along the way.

Saturday was no ordinary opening night at an emotional CenturyLink Field.

For one, the Seattle Sounders trounced expansion side FC Cincinnati 4-1. After starting their last three campaigns in wretched form, the Sounders won a season opener for the first time since 2015.

That, somehow, was the third or fourth biggest story of the evening.

“It felt amazing,” Morris said. “That’s what gave me the motivation last year to keep working hard during the tough times, was for this moment. To come back, hear that crowd noise, and be back playing on this field. It was a very emotional night.”

Morris first put the Sounders up 2-1 in the 33rd minute, losing defender Alvas Powell and first-timing a deflected shot past goalkeeper Przemylslaw Tyton from eight-yards out. Nicolas Lodeiro assisted, placing a well-weighted through ball into the ample space Powell chose not to defend.

“I love playing with Nico,” Morris said. “I make a run and he finds [me]. I tried to slot it in back post and got a little lucky with a little deflection there, but they all count the same so it’s all good.”

If his first goal was “a little lucky,” his second, just 10 minutes later, was anything but. Streaking into the penalty area on the counter, the Stanford product confidently buried a first-timed, left-footed rocket into the far-side netting from 16 yards out. Victor Rodriguez picked up the assist, rolling a cross through the penalty area to find his target in stride.

Morris is starting as a right midfielder for the first time in his career, making room for lethal striker Raul Ruidiaz at forward. If his second goal is any indication, the transition is going pretty smoothly so far.

“A lot of what I’ve been working on this year is obviously from a different position, playing a little bit wider, so getting into the box from the wide side. Victor made a great run up the line, and [played] just a perfect ball. I was fortunately able to finish it.”

A down-to-earth hometown kid who still lives with his parents, Morris is a favorite both in the stands and in the locker room.

“There are times,” conceded Sounders head coach Brian Schmetzer, “when I feel like a proud dad.”

Morris hadn’t scored since August 5, 2017, and just about every Sounder on the field mobbed him after each goal.

“Coming back from that — it’s a dark place, at times,” said left back Brad Smith. “It’s a long injury, and for someone like Jordan — who’s such a hard worker, such a nice kid, very talented — to score two goals in his comeback was amazing. Everyone’s happy for him. You could tell by the celebration, everyone was super excited.”

Leonardo Bertone put the visitors up early with a 13th-minute wonder strike, the first MLS goal in club history, but FC Cincinnati was overwhelmed throughout. They were outshot 24-7 and lucky to not to lose by a more lopsided margin. Ruidiaz and Kelvin Leerdam rounded out the scoring for the Sounders.

Saturday night was also the Sounders’ first chance to publicly reckon with the passing of former head coach Sigi Schmid, who passed away at age 65 on Christmas Day.

A towering figure in the history of modern American soccer, Schmid left a legendary career helming the UCLA soccer program to become the all-time winningest MLS coach, two-time MLS Coach of the Year, and a two-time MLS Cup champion. He posted an 115-79-56 record over nearly eight seasons with the Sounders, leading the club to a Supporters’ Shield, four U.S. Open Cup titles, and seven straight playoff appearances. Over the course of his tenure, the Sounders were among the league leaders in wins, goals, and goal-differential.

Before the match, Schmid’s wife Valerie tearfully accepted an honorary golden scarf from majority owner Adrian Hanauer at midfield. Schmid’s son Kurt and other family members were also present. Defender Chad Marshall, who played for Schmid in both Seattle and Columbus, was among multiple players visibly moved during a moment of silence and the singing of the national anthem. Schmetzer also seemed to briefly fight back tears in his post-match press conference.

“Sigi’s passing was certainly a sad day for all of us,” said Schmetzer. “And I just want to go on the record to say that we will miss him. And that he was a great friend.”

Schmid was clearly on Morris’ mind as well.

Morris certainly put on a performance that would have made his old coach proud.