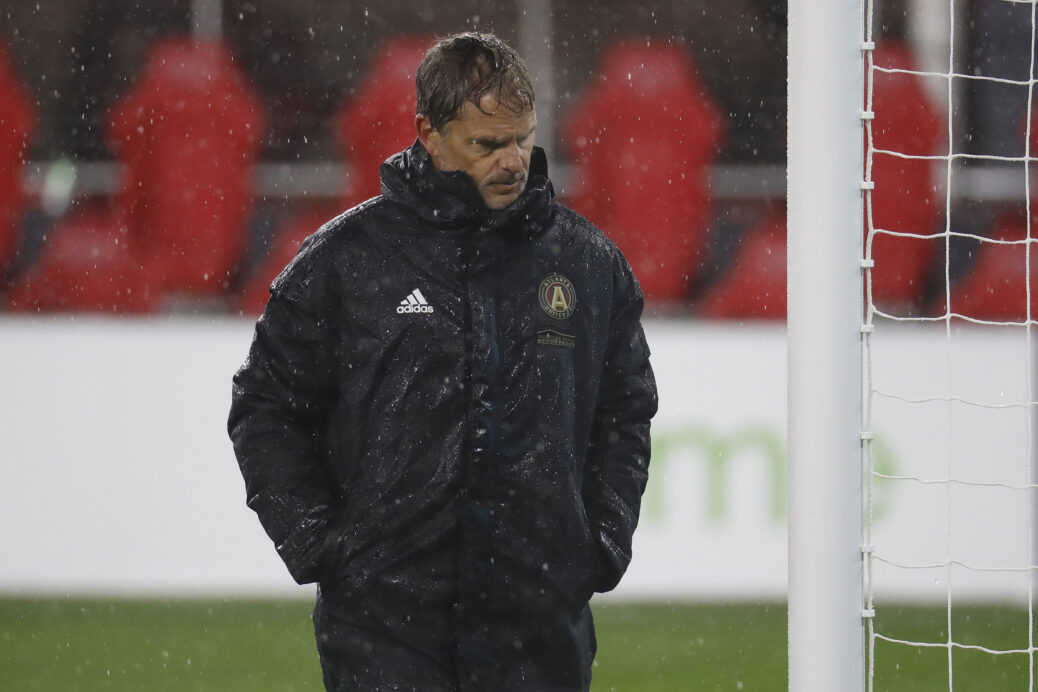 Atlanta United’s first Concacaf Champions League campaign is all but over, and Frank De Boer is largely to blame.

Liga MX power Monterrey dealt Atlanta United a defeat that was equal parts disastrous and dispiriting on Wednesday night, prevailing, 3-0, in the first leg of their quarterfinals series. The reigning MLS Cup champions never really looked capable of winning the match down in Mexico, especially not after conceding via a first-half penalty kick, but the club put forth a defensive performance that looked to make for a manageable situation ahead of the return leg down in Atlanta.

Then, came the encounter’s final act.

Atlanta United crumbled just when it was starting to see the light at the end of the tunnel, surrendering two (almost three) golazos in the final 10 minutes. Almost in an instant, the MLS club went from being in a decent position to an insurmountable one and it was De Boer’s mismanagement that was directly responsible.

Atlanta United just looks out of sorts defensively here on the second goal. It was 5 Monterrey attackers vs 7 Atlanta United players. Lack of pressure, lack of understanding, lack of instruction. pic.twitter.com/TroPkvSGHP

Again, Atlanta has defensive numbers. It is 5-v-3 on the play that leads to the third goal, but Monterrey still punishes the MLS side.

Good teams can make you miss but Atlanta United also made it too easy here. pic.twitter.com/u8hO7abHTu

Instead of accepting that a 1-0 loss would have been a good result to take back to Atlanta, De Boer continued to have his team push for an away goal late in the second half. While trying to get one generally makes sense given that road goals are the series tiebreaker, it was clear that Atlanta United did not have enough quality on the day to find the back of the net. Producing (and finishing with) just one shot on target, a team record for fewest, was crystal clear evidence of that.

Rather than search for a goal, De Boer should have instructed his players to set up shop in a deeper block to try and close out the game. If they could find an away goal in an intelligent manner via a counterattack or set piece, great. If not, the club could take solace in knowing that it was returning to the fortress that is Mercedes-Benz Stadium down just a goal.

“If we could have gotten out of here 1-0, it would have been a good result for us,” said Atlanta United captain Michael Parkhurst.

The new head coach did not take that approach, though, and what transpired on the field allowed a visibly-anxious Monterrey side that wanted more than a one-goal victory to get its way. Los Rayados saw the blood in the water with Atlanta United looking so disorganized at the back, and took full advantage of all the space they had to operate in.

Dorlan Pabon’s 80th-minute goal, while product of a heck of a strike, came about because Atlanta United’s defense was out of sorts. Spacing was all wrong between the back five and midfield and players were visibly not clear on who they had to mark. What’s more, Ezequiel Barco and Gonzalo ‘Pity’ Martinez (as well as Josef Martinez) all stayed higher up the field waiting for the ball instead of getting back to help out defensively. Three players just standing and watching as the rest of the team tried to put out fires against a dynamic, quick, and lethal Monterrey side.

That still did not make De Boer to come to his senses. He not only continued to try and get numbers into the attack in the immediate aftermath, but also refused to make his first substitution, be it for tactical or physical reasons. Mind you, almost all of Atlanta United’s lineup had played just three days prior in an MLS road game vs. D.C. United.

Monterrey, predictably, shoved another goal down Atlanta United’s throat. Only afterwards did De Boer decide put on the likes of defensive midfielder Jeff Larentowicz and energetic winger Hector ‘Tito’ Villalba, but that transpired in the 90th minute. By then, it was too late and practically pointless.

They also made next week’s task, one that comes after an MLS home opener against FC Cincinnati on Sunday, impossible. Yes, Atlanta United may have the talent, but it has not shown a clear and cohesive identity from the run of play under De Boer to make one think that a remarkable turnaround vs. a Monterrey side that has not lost in all of 2019 is possible.

What’s more, Los Rayados will be able to comfortably sit back and counter in Atlanta, if they so choose, to try and force the MLS outfit to leave itself as exposed as it was at the end of the first leg. One more goal from Monterrey means Atlanta United needs to score five to advance, and that is about as bleak a proposition as you could imagine at any stage of the competition.

“It’s obviously going to be very difficult to play a dangerous team like Monterrey,” De Boer told the Atlanta Journal Constitution after Wednesday’s lopsided loss. “It’s going to be very tough but we are going to give it our everything and see what happens.”

Crazy things do happen in soccer, but they typically require competent management. Right now, that is nonexistent for Atlanta United.