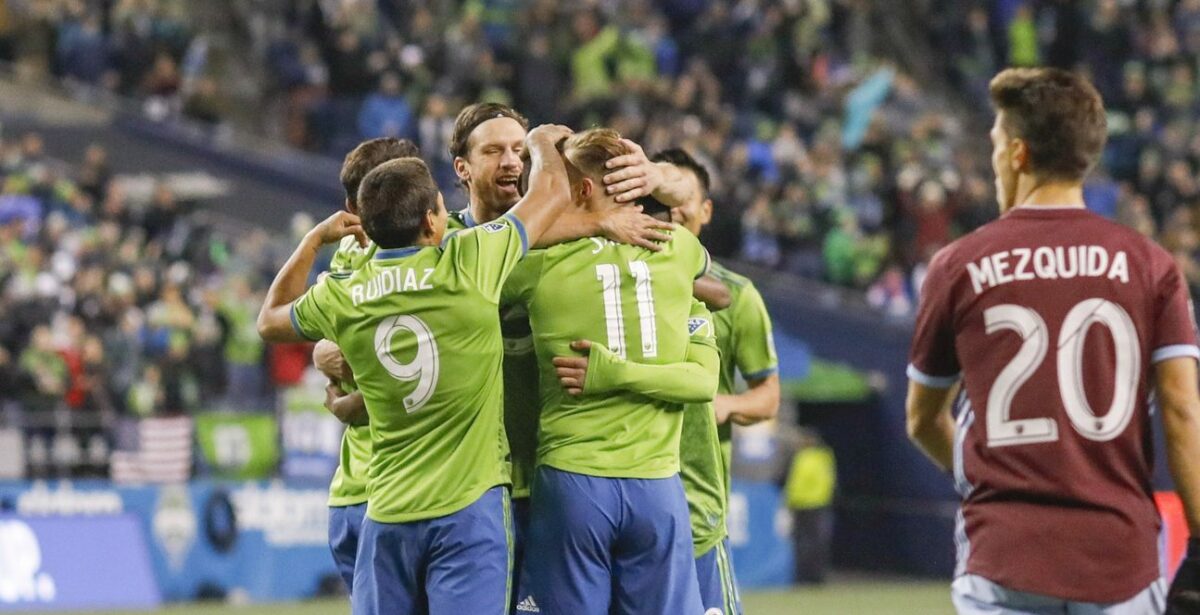 SEATTLE — Though the stands were a blue-green sea of some 37,000 stocking caps and winter fleeces, you would be forgiven for thinking it might be late summer in the Emerald City.

Known for hibernating until the snow melts from the nearby Cascade Mountains, the Seattle Sounders are scoring goals, creating chance after tantalizing chance, and winning soccer matches. They are playing with the swagger befitting a spendy perennial title contender, yet absent until at least June for three years running.

The Sounders pounced on and overwhelmed the Rapids from the opening whistle, scoring twice in the opening 10 minutes, first through Kelvin Leerdam and then through designated player Raul Ruidiaz, the right back and the striker both finding the back of the net for the second straight week. It was a chippy, foul-laden, and discombobulated match for much of the remaining 80 minutes, but the damage was done.

“That was a pretty tremendous opening 10 minutes,” said head coach Brian Schmetzer after the match. “They were up for the game. They were fast, they played fast. The quality of the goals — the quality of some of our play — was tremendous.”

Defensively, the club has allowed but one tip-of-the-hat wonder strike in more than 180 minutes of soccer.

To be clear, the Sounders have not yet left the very friendly confines of CenturyLink Field, where they have lost only six times since Schmetzer took over as head coach in July of 2016. And they have not yet played anything resembling one of the league’s better squads, let alone a true powerhouse.

Expansion side FC Cincinnati wasn’t ready for the moment in its 4-1 drubbing on opening weekend. And the Rapids overhauled their roster in the offseason: while head coach Anthony Hudson enjoys the most competent Rapids roster in years, it looks like it will take some time to get all the new pieces — Kei Kamara, Benny Feilhaber, Nicolas Mezquida, and Keegan Rosenberry to name a few — clicking and on the same page.

The Sounders also maintain a particular dominance over the Rapids, winning all five matches since July of 2017 by a combined score of 14-2. They are 18-5-2 in 25 in all-time matches between the sides, outscoring the Rapids 48-25 in the process.

So it is only two games in the 34-match marathon that is the MLS regular season, and not against the stiffest competition. But this is a club that didn’t notch its third win until June 9 a year ago.

“It was really good to see, ” said goalkeeper Stefan Frei, “the way I think in both games, that we’ve come out on fire right away and imposed our style and threatened. It’s really nice to see, and obviously today we rewarded ourselves and got some goals, which is great.”

After not scoring in all of 2018, Leerdam now has two goals in two matches, and is getting forward with regularity. He scored in the fifth minute on Saturday night, and never stopped pressing all night, even standing at the goalmouth awaiting a cross in the game’s waning moments.

“I love it,” said Schmetzer. “He puts himself in good spots, and he does the defending.”

There are some areas of concern. For the second week in a row, the Sounders left multiple goals on the table.

“We had a lot of chances to score the third goal,” said designated player Nicolas Lodeiro, “and we need to work on the last pass.”

Harry Shipp sent a wide-open shot into the stands in the 71st minute, a chance to put the game to bed wasted.

“Once we analyze and see what we can do better, be a bit more clinical with our chances, I think it can be three, four, five [goals],” said Frei. “But that’s a good problem to have, [it’s] a luxury to have missed opportunities and still walk away 2-0. It’s great.”

It’s great, for now — a footnote to the feel-good story that is a 2-0 start in Seattle. But against Atlanta United or Sporting KC, it could well be the difference between a loss and a result.

And despite going up 2-0 at home in the 10th minute, for long stretches the match was a hectic, back-and-forth affair. Some of that has to do with the loss of defensive midfielder Osvaldo Alonso, whose duties have fallen jointly to Cristian Roldan and Gustav Svensson.

“I want us to control tempo,” said Schmetzer. “I need us to control tempo sometimes. And those guys are big parts of that. It’s not like it is just those two. I mean, it’s Nico [Lodeiro], it’s Victor Rodriguez. I know we like to get on the run, get Jordan [in] transition. But someone, at the right moment, has to say, ‘OK, let’s keep possession for the next five minutes.’ And that’s my expectation for those two.”

In the post-match locker room, Roldan sounded a bit like a substitute teacher not always able to corral those in front of him.

“I want to dictate the tempo every game. But sometimes I feel like we just go, go, go,” Roldan said. And I think that’s frustrating for us midfielders, because we work so hard to get the ball back, and then all the sudden we’re having to chase the ball. There was an instance where I’m yelling at our front four to really slow down, because besides Jordan we’re not a fast break team.”

“Obviously Nico and Victor find their way, find their pockets, they have the energy to go forward, but they’re not fast players. So at times we’ve really got to slow it down. I felt like it was frustrating, because we were up 2-0 and we weren’t controlling the tempo of the game. I think that can get better, but in the end you’re not going to complain too much when you win 2-0.”

Issues to address and things to refine, to be sure. For now, the Sounders will happily take the wins, and — at last– a fast start to a season.