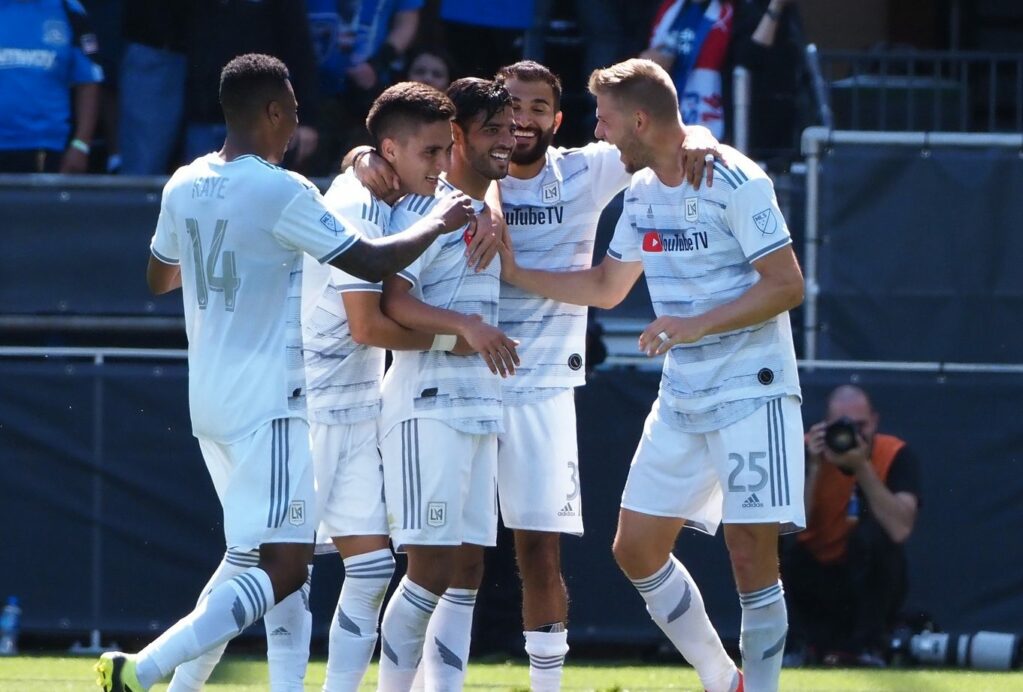 LAFC is the best team in Major League Soccer right now with a 4-0-1 record. It is still early in the season, but the MLS leaders have been ruthless to start the year and a big part of their success has been the form of an early-season candidate for MVP.

Carlos Vela continued his strong 2019 with a hat-trick in LAFC’s 5-0 trouncing of the San Jose Earthquakes on Saturday. His performance may have been against, statistically, the worst team in MLS, but it capped off a strong first month of the campaign in which the 30-year-old attacker registered six goals and three assists.

“I think when I come here I had good feelings about everything that they would build,” Vela said. “We are enjoying it right now, we know it’s important for us we are trying not to just have a team, but to play well and make it enjoyable for our fans. We work really hard everyday to make our performances like that.”

“They played one-against-one all the field, so we have really quick guys in the middle and attack. We found the spaces, we find the good moments to do the counter-attacks, so I think it was a very good game. It’s just the start though, we have to keep working if we want to have more games like that.”

The Earthquakes did their best to neutralize Vela with their man-on-man defending on Saturday afternoon but it did not work. One of the easiest finishes of his career came just eight minutes in after a failed clearance by Quakes keeper Daniel Vega allowed Vela to escort the ball into an empty net.

Diego Rossi set up Vela for his second goal of the opening half before the Mexican National Team forward capped his performance with a wonderfully taken long-range effort. Saturday’s match may have been against an overmatched opponent, but it served to highlight just how good Vela is playing right now at the beginning of the 2019 season.

“I always work to be the best player. In Spain we had Messi and Ronaldo so it was tough to be the best,” Vela said. “Here I feel like I am in a good level, still having a good feeling about things and I think I can be one of the best players in the league. I am trying to show every game that I can work on that.”

“In all ways he’s committed to the team,” LAFC head coach Bob Bradley said. “Everybody is participating and trying to make an impact. When we lose the ball we want players tracking back to win it back. If we can play quickly we do, if not then we try to be organized and get everyone back into formation. Carlos sees that it works with some of the best teams in the world and he does those things because he is that type of person.”

Vela’s introduction to MLS last year ws also a positive showing for LAFC in the club’s inaugural campaign. LAFC achieved plenty in 2018, finishing third in the Western Conference, as well as nine points clear of their local rivals, the LA Galaxy. Vela scored 16 goals and added 13 assists, establishing himself as the face of the franchise.

Even though he will no longer be on the right side of 30, Vela’s role with LAFC has never been greater as the team aims for continued success in its second MLS season. The club has asked Vela this year to become more involved without the ball, which is something that has been visible in the early matches of the season.

“This year he’s had such a good way of moving on the pitch,” said Bradley. “Instead of working his way to win the ball, he’s found a really good balance of being on the move more. And as a team we’ve found better ways of getting him involved which will help us moving forward.”

“We challenge Carlos to be better all the time,” Bradley said. “I took a lot of heat because somewhere along the lines, I mentioned Messi and he is the best player I’ve seen in my life. But Carlos needs to be challenged at the top level, he gets it. He enjoys the football that we play, he enjoys having a bigger leadership role and I think it’s visible every time he steps on the field.”

After breezing through some of 2018’s playoff teams in March, LAFC now prepares for a busy April, which includes a pair of matches against another hot team in the Seattle Sounders.

For Vela, however, he feels more is to come even with six goals to his name already.

“I am in very good form right now, one of the best in my career,” Vela said. “I still don’t think I’ve reached the top yet. There is more to come.”