Who Should the USMNT Start vs. Chile?

The U.S. Men’s National Team’s is coming off its third consecutive victory under Gregg Berhalter and will look to close the month of March by keeping that perfect record.

After a 1-0 win over Ecuador last Thursday in Orlando, the USMNT will entertain Chile in Houston on Tuesday. Berhalter has already stated several changes will be made with his players returning to domestic action next weekend.

Chile brings talented midfielders to the table with Arturo Vidal and Charles Aranguiz being the marquee names. The Chileans are coming off a 3-1 loss to Mexico last week, where they conceded all three goals in the second-half.

Midfielders Tyler Adams and Weston McKennie are unavailable for the USMNT while Wil Trapp left Thursday’s match after halftime with leg contusion. Ethan Horvath has already been labeled as the starter against Chile, giving Berhalter a chance to see the Club Brugge goalkeeper in action.

It is unsure whether or not Christian Pulisic will be starting after a busy shift five days prior and the same can go for John Brooks and Tim Ream.

Here’s a closer look at one USMNT lineup Berhalter could go with: 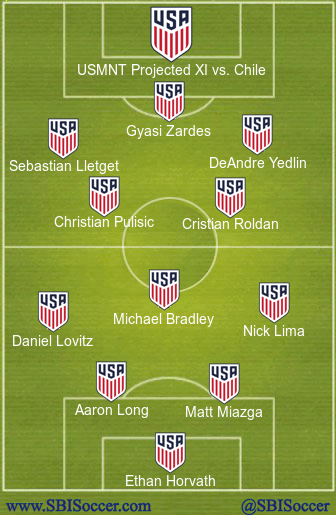 Ethan Horvath will earn his fourth cap for the USMNT and start in goal. The Club Brugge keeper has had a fine season abroad and now will hope to carry that into National Team duty.

The backline will see the most changes as it comes with the most depth on the roster. With Adams returning to Leipzig, Nick Lima should get the start at right back. Lima shined in January camp and will get another shot to impress Berhalter.

Aaron Long was stellar against Ecuador, winning numerous duels and helping keep a clean sheet. The New York Red Bulls defender’s rise has seen him put himself into the starting centerback conversation, but he will have Matt Miazga next to him on Tuesday night.

Miazga has earned valuable minutes with Reading and will get his chance to translate that back over to the USMNT. Miazga and Long both should provide physicality against the Chilean attack that is versatile and technically sound with the ball.

After not earning minutes on Thursday, Impact left back Daniel Lovitz should start. The only natural left back on the roster also did well in January camp and will look to take advantage of several other defenders not included this month like Antonee Robinson.

With Trapp’s availability up in the air, Michael Bradley will slot into his spot. The longtime USMNT veteran will continue to play a strong leadership role under his new head coach and should provide cover allowing playmakers like Pulisic and Roldan to roam.

Pulisic may not play the full 90 but he will start in the middle of the park like he did against Ecuador. Playing as the No. 10 is what Pulisic is best at and he will need to continue growing at that role with new teammates next to him. Roldan adds another element to the attack and should be fresh after a short cameo last week.

In attack, Gyasi Zardes deserves another start up top after scoring the lone goal against Ecuador. Although he didn’t have plenty of chances, Zardes did better in holding the ball up and passing in tight spaces, both of which he has been criticized for before.

Out wide, DeAndre Yedlin will get his chance to start further up the field on the right wing. Yedlin’s pace should pose problems for Chile’s backline and he can also track back and provide help defensively.

Sebastian Lletget is another player trying to earn minutes and he will take the place of Paul Arriola on the left wing. Lletget brings skill and creativity to the attack and will get his chance to prove to Berhalter he belongs with the National Team.

Corey Baird and Jonathan Lewis are two additional options offensively that could be used should Berhalter want to give some other players a look.