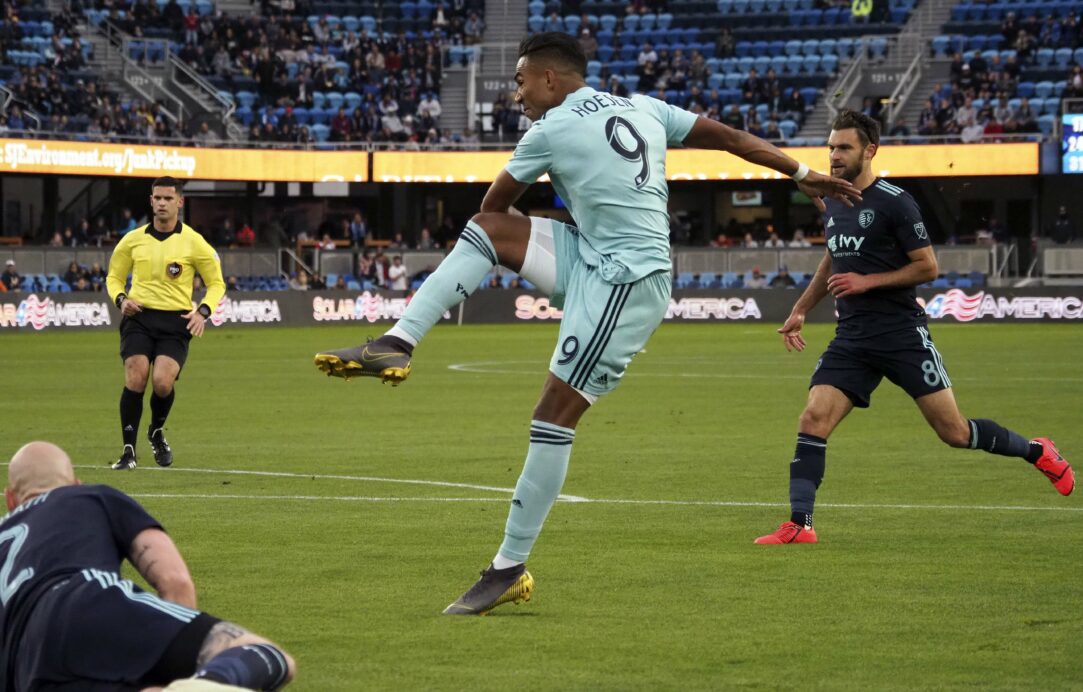 Maybe, just maybe, this is the Matias Almeyda version of the San Jose Earthquakes we’ve heard so much about.

Maybe, just maybe, everyone at Avaya Stadium got another preview of what his system is supposed to look like after the Earthquakes notched their second win of the year, 4-1 Saturday night against a struggling Sporting Kansas City side that is now winless in their last five matches.

“The team is finding the way; they are finding a style,” head coach Matias Almeyda said after the match. “The delivery, the sacrifice, the collective play, the determination of every player, I think that’s why we were able to make a difference.”

San Jose looked for a response after the loss at the Houston Dynamo last week and got it from Danny Hoesen, twice in the first 15 minutes. Shea Salinas scored just 13 seconds into the second half and Magnus Eriksson notched his second goal of the season just after the hour-mark.

Hoesen has started to come into his own after a slow start to the season due to trouble with his visa, forcing him to miss training time to go back to his home country of Holland to fix the issue. He’s scored three goals in his last three matches since replacing Chris Wondolowski in the Starting XI.

“If you miss chances, you should forget about it and go for the next one,” Hoesen said. “Against Portland, I got in some good positions and didn’t score, and today I did score. So, hopefully, I can build on this confidence and keep going.”

“We had to convince him that he was a complete player, and this is the way that he should play, making sacrifices defensively for the team and being convinced he can score a lot of goals,” Almeyda explained.

“Today, not only did he play well attacking, but he also helped a lot defensively.”

Defensively, San Jose shut down attack after attack by SKC with their lone blemish coming off of a second penalty kick, this time as Felipe Gutierrez converted from the spot in midway through the second half. Krisztian Nemeth had a chance at the penalty spot in the first half but skied the kick over the bar.

“Today was a great, great team performance,” defender Florian Jungwirth, who made his third straight start Saturday, said. “We scored twice pretty early, which obviously helps, but all in all a great night.”

Since the trio of Hoesen, third-year Earthquake Jackson Yueill, and Florian Jungwirth entered the Starting XI on April 6 against the Portland Timbers, the Earthquakes have outscored their last three opponents 8-2 with back-to-back clean sheets at home – a stark contrast from their nightmarish month of March where they were outscored 14-2.

“I think that bringing on Jackson (Yueill) gives that quality in the midfield that we’ve been looking for,” Almeyda said. “He’s a young player. So, we need to give him confidence because he is learning and he has a lot to give.

“Defensively, with the centerbacks, they’re improving. There’s not a player that really stands out. It’s more of a team thing and that’s what motivates me.”

The road ahead doesn’t get any easier for San Jose. They’ll travel for the next two matches, on a short week nonetheless, starting at Seattle Wednesday night in Almeyda and Co’s. first-midweek match. But if tonight says anything, the Earthquakes are ready for the challenge ahead. At least, defender Nick Lima thinks so.

“Tonight gives us confidence but we build on it, we go back to the training pitch with not much time but whatever it may be, we continue to work things out communication-wise,” Lima said.  “That’s a huge part of it and we get a little better for the next game.”