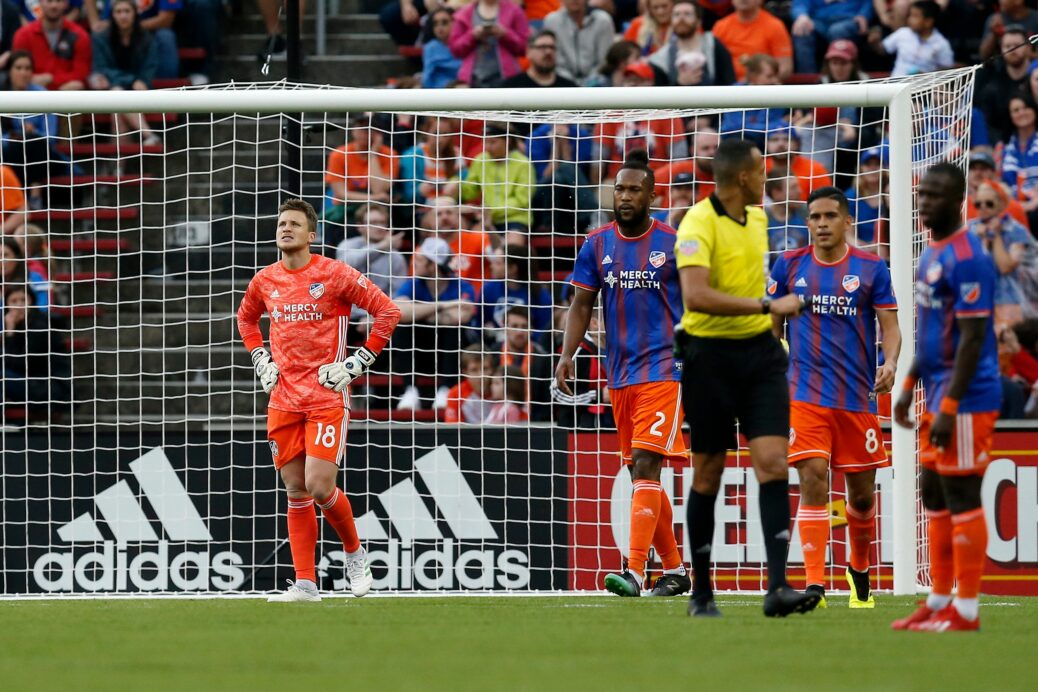 FC Cincinnati held the lead for most of the match thanks to a strong aerial counter that found Roland Lamah dribble around SKC goalkeeper, Adrián Zendejas in the box. Defender Andreu Fontas had no other choice but to commit the foul.

The chaotic play set up a penalty taken by Darren Mattocks who converted, earning his first goal of the season in the process.

From then on, SKC continued to earn the lion’s share of possession and shots. While it wasn’t the sturdiest of performances, the FC Cincinnati defensive troop was up to task, keeping Kansas City off the scoreboard until the 62nd minute.

SKC’s Gianluca Busio found himself in the right place for one of the easier goals he’ll earn in his career as FCC’s Spencer Richey and Greg Garza both committed to him, missed, and presented Busio with an untended goal. The teenager took full advantage of the gift, helping Sporting KC earn a 1-1 draw at Nippert Stadium.

The reality is, Sporting Kansas City did not put its best XI on the field and had the luxury of being able to inject starting quality with Felipe Gutiérrez and Krisztián Németh’s appearances in substitution, prompting a serious uptick in play. SKC looked increasingly likely to find another goal, but FC Cincinnati may have been saved by the bell.

Squandering the lead on such a silly play is disappointing and wasteful for the expansion side, especially with a visit to red-hot LAFC next on the docket.

FC Cincinnati moves to 2-2-1, 8pts and currently in fifth place in the eastern conference, Kansas City owns the same line but sits in seventh in the western.

For the first penalty goal in club history, Darren Mattocks was cool and calm as he converted and gave FC Cincinnati a real chance to beat a good team.

Kelyn Rowe’s 33rd-minute miss from point blank. Had he been just a little more well measured, it would have gotten SKC on the board earlier and possibly over the top at the end.

While he stood strong for most of the match, Spencer Richey’s abandonment of the net in the 62nd ultimately cost FC Cincinnati three points.