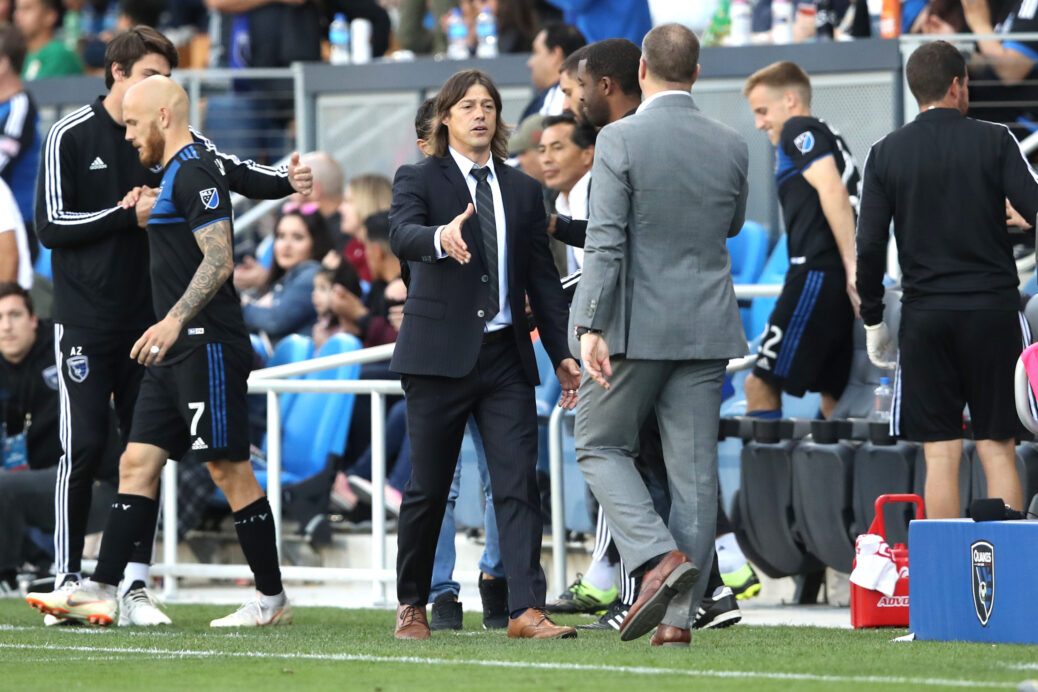 The toughest thing about an earthquake is that you never really know how hard it will hit. It could be nothing more than a tremor or a little shake, or it could be a complete force.

For the first four weeks of the 2019 season, the San Jose Earthquakes were nothing more than a little shake, if that. In last Saturday’s win over the Portland Timbers, they rose to the occasion and became, if anything, a bigger shake.

Matias Almeyda made three changes to the lineup last Saturday as Danny Hoesen, Jackson Yueill, and Florian Jungwirth each made their first starts of the season.

The result: a 3-0 win and a San Jose Earthquakes side that looked like they could handle Almeyda’s man-marking system as it’s drawn up to be – at least, for a week.

“It’s difficult when we are not getting the results we want and we need to change players and positions,” Almeyda said in his Wednesday press conference, “but the players know they are all important and I will use them all as the season goes on.”

The Earthquakes seemed to have a better grasp of Almeyda’s man-marking system on Saturday and produced the club’s first clean sheet since 2017. While the team isn’t where Almeyda wants it just yet, he does feel as if the win, even a[[p'[[p[‘;gainst a struggling Timbers side, is a sign of progress.

“I think that the way it’s functioning is closer,” Almeyda explained. “If the players are good interpreters (of the system), they’ll take care of their position knowing there’s a system that we should respect.”

On Saturday, Matias explained his system to the media. He explained it as not being completely an extreme man-to-man concept as many have laid it out to be.

“People think that our whole system is man to man, and that’s not true,” Almeyda said after Saturday’s win. “We play mainly with one free player at the back and depending on where his forward is, he goes and marks and the other defender becomes free.

“The defenders were used to playing in a line, and honestly, I don’t like that. I think it’s like playing at risk all the time. So, with this change in the system, it will take some time to adapt. I used to be a player (in the system) and I understand.”

Midfielder Anibal Godoy was responsible for covering Portland’s Diego Valeri and shut him down on the day, eliminating a usually serious threat by the Timbers.

In the backline, both Jungwirth and Harold Cummings were able to handle Portland’s attacks, a vast contrast to the week prior against LAFC. It also helped that Marcos Lopez returned to the lineup to add another true defender in the back-four, and Tommy Thompson is apparently progressing in his development as a right back. Nick Lima subbed into the game around the 70th minute and picked up where Thompson left off and nearly scored a goal of his own.

“Saturday was like a self-confirmation because we knew we could that,” Jungwirth said on Wednesday. “Everybody was talking about the system, about tactics, about the players and it was a hard time for everybody. But, on Saturday, we showed that we could do it and it’s not the system or something else.

“I think we knew before how it’s supposed to work, I think we just didn’t execute it well. But I think instructions were clear from Day One, and then like I said, it’s on us to execute it on the field. We didn’t do it well in the first games, but now we did it well once and now it’s important to show this every week.”

The biggest and most notable change was Hoesen stepping into the Starting XI for Chris Wondolowski.

Wondolowski was a non-factor in an Earthquakes attack that had no flow or anything going in the first month of the season. Hoesen, on the other hand, scored 33 minutes into his first start of the season and proved to be a factor on the day, easily running through the Timbers’ backline, creating opportunities in-on-goal.

“Chris will surely achieve his dream this year of becoming the league’s all-time top scorer,” Almeyda said. “I felt he had a lot of pressure on him and I wanted to let him rest and not let all that pressure fold him because we are a team and not just a single player.”

Almeyda hasn’t announced if he plans to use the same Starting XI in this Saturday’s conference matchup against the Houston Dynamo, but says that the team’s first win of the season hasn’t changed anything about their training regiment nor how he’ll select his starters for Saturday.

“We are still training the same way,” Almeyda said. “We correct things when we believe it is necessary. We showed them the things they did well when it was necessary, but our passion and efforts won’t be changed by one result. We don’t train more when we lose, and we don’t train less when we win. We’re in search of a style and looking to achieve a lot of positive results.

“I’m watching and observing absolutely everything, and many times I choose a player by the attitude that he trains with. That’s one of the ways a player can earn a spot, and that’s also something they have to be aware of when they have to save their spot if they are starting.”