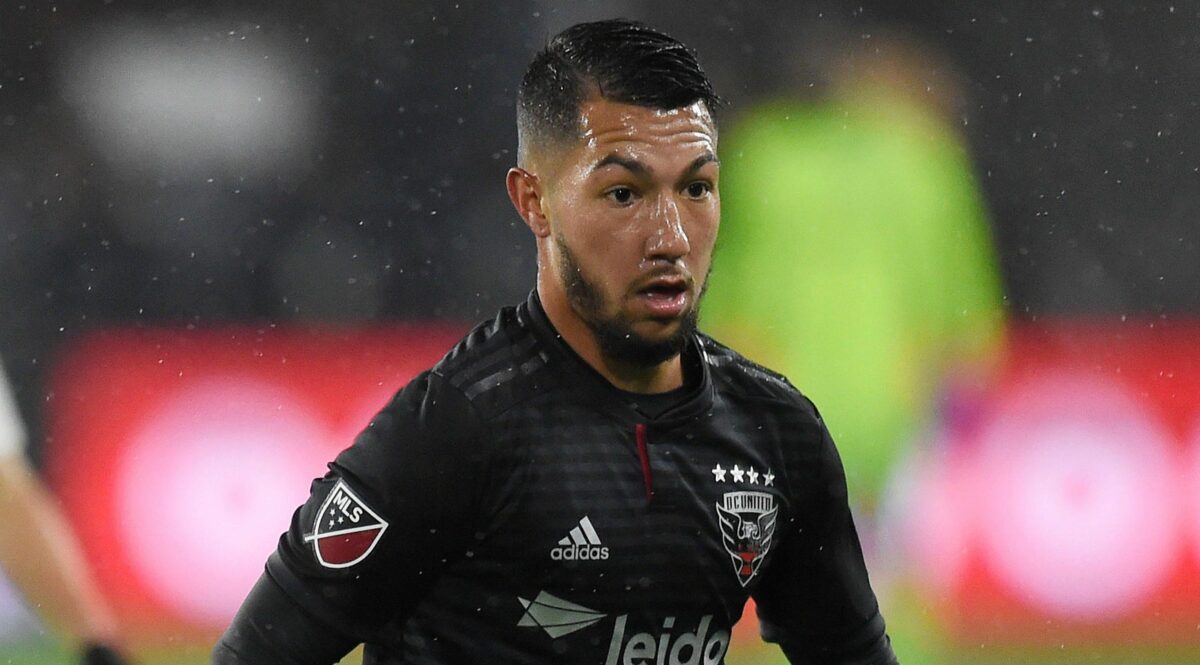 NEW YORK — There is no denying that the 2018 introduction of Wayne Rooney has paid major dividends for Luciano Acosta. After all, Rooney’s arrival last year led to a raise in Acosta’s goal production and assist output.

The Englishman’s presence did something else for Acosta that was equally as beneficial for D.C. United. It made him to want to play defense.

D.C. United has picked up in 2019 where it left off last season, starting the new campaign by going undefeated through four games to sit atop the Eastern Conference. Rooney’s contributions in the attacking end have played a significant role in that success, but so too has an honest conversation that he had with Acosta about work rate shortly after arriving last year.

“He gave me a message after the game against Atlanta, if I remember correctly,” Acosta told SBI in March. “I took it as more a piece of advice than a scolding. It helped me a lot. He told me in the locker room, and I took it in a good manner, he told me in a good way. Then in the game vs. Montreal, which was in Montreal, he saw me run a lot more so he congratulated me.

“From there, I began to contribute more defensively and ran a little more and to help out my teammates more, too. Maybe I didn’t do it before that because we were losing games at home and there was fatigue. I think I didn’t do it before because of a number of things and because of the results we had and maybe I would get frustrated. Today, I feel like I’m at a great level.”

While it is not uncommon for attacking midfielders to be reluctant to play defense, Acosta’s newfound willingness to put in the work on that end has raised the club’s level. Having another player run to press opposing attackers and chase after the ball, especially in positions higher up the field, as well as covering space in the defensive half has made D.C. United tougher to play against. It is a contributing factor to the club conceding just once to date this season while going 3-0-1.

The 24-year-old Argentine’s efforts when playing without the ball were inconsistent in the past, according to D.C. United head coach Ben Olsen, but the playmaker now appears to understand the importance of being engaged defensively.

“He’s a young kid and I think like a lot of players as they get a little older they see that in modern soccer that it’s everyone that is working in possession and out of possession to be a successful team,” Olsen told SBI. “Ultimately, he wants to win. Winning is going to help him and it’s going to help our group, and I think so far this year he’s been great, particularly in road games.”

For Acosta, who is 5-foot-3, defensive responsibilities are more tactical than physical. Given that he is unlikely to win a lot of 50-50 or aerial balls, his assignments, depending on the game, usually consist of pressing and clogging up passing lanes.

If he can win the ball in dangerous positions and turn them into chances, great, but D.C. United is more focused on having him fill space in order to be a tougher and more organized team to break down.

“He’s very savvy,” said Olsen. “He understands the game and where to be and now that he’s committed himself and that he’s mature enough to take that on it’s not coincidence that we’re a better team defensively.”

As much as his defensive work has improved, Acosta’s attacking qualities are still his bread and butter and what have proven so decisive in several games, including this year’s season opener vs. Atlanta United. The playmaker’s production (he finished with 10 goals and 17 assists in a breakout 2018) and potential are big reasons why D.C. United have publicly stated it is looking to resign him to a new deal since earlier this year.

Acosta, however, is in no rush to do so despite being in the final season of his current contract.

“I try to concentrate on where I am and on the training sessions and games,” said Acosta. “I try not to think about that, and that’s why I have an agent who takes care of that. From the first moment that they talked to me about a new contract I told them that I didn’t want them to communicate it to me and to instead talk to my agent about everything and to let me stay focused and in the best way for this season.”

Acosta may want to concentrate on the task at hand, but that could present a problem for D.C. United given that Acosta could sign a pre-contract with a team in another league as early as this summer. He has hopes of playing in Europe in one of the world’s biggest leagues, too, so that makes things even more pressing for the MLS outfit given that it could not only lose him in the near future, but lose him without being paid a transfer fee.

“Obviously it’s the dream we all have,” said Acosta. “Every player wants to play on a big team in Europe. Obviously, it’s a dream of mine and hopefully it will come true soon.”

It nearly did this past winter. French powerhouse PSG came calling and Acosta even flew over to Paris to try and hammer out the final details. PSG and D.C. United did not come to an agreement before Europe’s transfer deadline, however, leaving Acosta to return to the U.S. capital for a fourth season.

There are plenty of examples of players who have allowed failed negotiations like that to frustrate them to the point that it affects their play, but for Acosta there is no problem with being with D.C. United for another season.

“It’s soccer. These things happen,” said Acosta. “One day you’re close to signing with a great club and then it doesn’t happen so you’ve got to stay with the club you’re at. I just have to keep on working so that other offers of that magnitude come in. I took it calmly, with lots of maturity, and now it’s about continuing to work.”

Not just on the attacking end, but on the defensive side as well. D.C. United has benefitted greatly from Acosta’s more well-rounded game, and has the look of a contender at this early stage in the year.

Things could change drastically if Acosta leaves for Europe this summer, but right now D.C. United is enjoying getting the most out of him. All thanks to that locker room exchange from last season.

“That piece of advice Wayne gave me helped a lot,” said Acosta. “Honestly, I’m very thankful to him for that.”