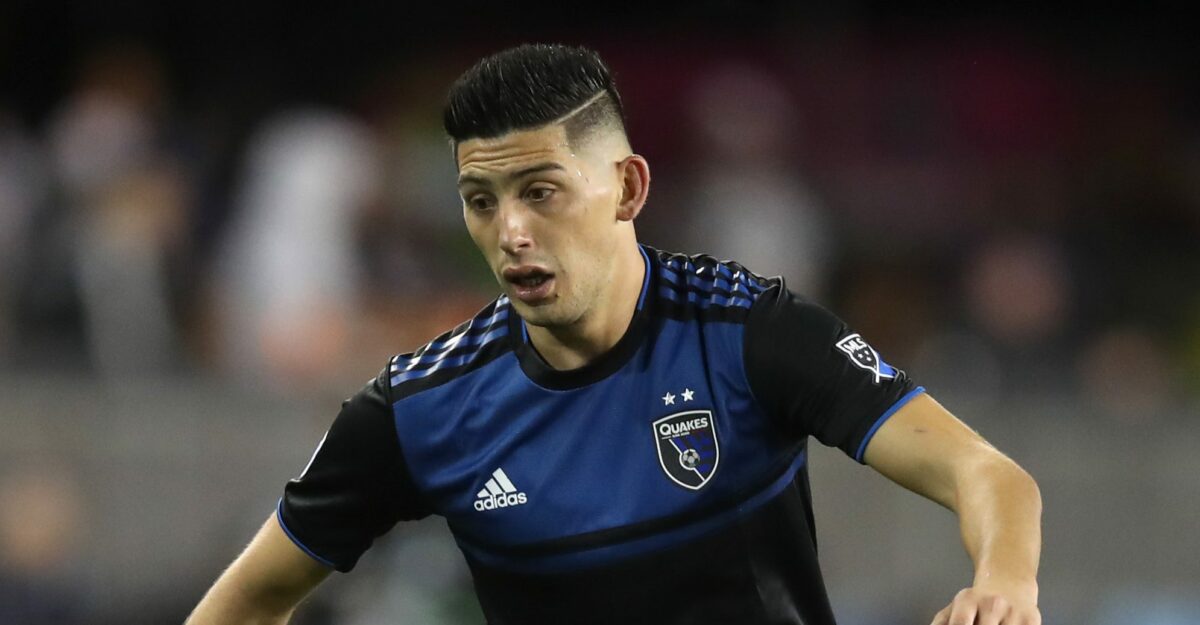 Cristian Espinoza entered this winter thinking a lot about his future. He had not found consistent playing time in either Europe or South America, and wanted to go to a place where he could earn minutes regularly.

Then, a familiar face came calling with an offer that was too good to pass up.

The first few weeks of the MLS season have not been all that kind to the San Jose Earthquakes. The losses have piled up, some of them have been beyond ugly, and the performances both collectively and individually have left a lot to be desired. If there has been one bright spot, however, it might just be Espinoza.

The dynamic winger who joined the club in January has introduced himself to MLS with some notable performances. Espinoza was not only a key figure in the Earthquakes’ first win of the season this past weekend, but has started and gone the distance in each of the club’s five matches to date.

For the 24-year-old Argentine, these type of regular contributions are just what he had hoped for after spending much of his time since 2016 toiling on the benches of clubs like Spanish side Valladolid and Argentine power Boca Juniors.

“It is always important for a player to leave a good image of himself at the club he goes to and to have a coach that desires the same thing,” Espinoza told SBI. “It is something that motivated me a lot and pushed me to come here. I’m very thankful because (the coaching staff is) giving me the confidence of playing consecutive games, which is something very important for me and something I had not achieved much during the last two years.

“All these opportunities that I’m having are very important for me and I’m trying to repay the confidence they have shown in me.”

So far he has done a decent job of that. While the results from a collective standpoint could certainly be better, the speedy Espinoza has done well from an individual standpoint. He scored a goal and delivered an assist against the Portland Timbers this past Saturday, and was also a protagonist in a road defeat to the New York Red Bulls last month.

His arrival in San Jose likely would not have happened, however, if not for head coach Matias Almeyda. Espinoza not only watched his compatriot compete during a respectable playing career, but also went up against the Almeyda-coached Banfield when Espinoza was starting his career at Huracan.

The familiarity they had with one another, even though they had not officially met until this year, was instrumental in convincing Espinoza to join MLS. So, too, were the words of a former teammate.

“I spoke a lot with Kaku,” said Espinoza, referring to Red Bulls playmaker Alejandro Romero Gamarra. “He told me a lot about the league, that he was happy at Red Bull, and that they had treated him marvelously from the first day he arrived. He was super happy because, like me now, he found upon his arrival a league that is very competitive and that continues to grow every day.”

Like any player upon their arrival, Espinoza has begun to form his initial impressions of MLS. He thinks the league is very demanding physically and the one that is most similar in that regard to those in Europe, where plenty of players are big, powerful, and quick.

Not that the Buenos Aires native cannot handle the physicality. Espinoza may be listed at just 5-foot-7 and 154 pounds, a frame far from intimidating, but he has shown both in games and training that he has the savvy and strength to hold his own against bigger opposition.

“He’s strong, has got great technique, he’s great 1-on-1,” Earthquakes captain Chris Wondolowski told SBI. “He’s able to open up defenses, but also has the technique to do some pretty special things. I also think something that kind of gets overlooked is his work ethic. I think the way he tracks back in games is unreal and also in practice every day he brings it, and it’s contagious. He’s a pretty special player.”

Espinoza’s mentality, quality, youth, and potential are all reasons why La Liga side Villarreal spent a reported $8 million to acquire his services back in 2016. The Spanish outfit still owns his rights, too, and as of right now he is only set to be with the Earthquakes on loan through the remainder of this MLS season.

Heading back to Europe is a goal Espinoza has for his career, but he is not necessarily in a rush to return there. He knows the Earthquakes are starting a new ambitious projected under Almeyda’s guidance, and would not mind being a long-term part of it.

“I’m thinking more about the moment I’m in at this stage in my career more so than what could happen in the next year, year-and-a-half, or whatever time period,” said Espinoza. “Today, my mind is all in San Jose. I’m going to give everything I have, and even what I don’t have, to this jersey and this club. Honestly, it would be a huge joy to be part of the initial stage and, you never know, maybe the entire process that the club has planned out for this new chapter.”

Espinoza’s focus may currently be on trying to help the Earthquakes in the beginning stages of this new process, but he knows it will take some time for the club to work through the kinks and initial growing pains. Still, he wants to do so as quickly as possible.

“(Almeyda) and his technical staff have such big aspirations for the club, and that is something that motivates every player and something you seriously consider when it’s time to make a decision,” said Espinoza. “It’s not the same going to a club where you’re fighting relegation as it is coming to San Jose and trying to fight for big things. I prefer to compete for big things.

The idea of the entire team and group, including the technical staff and club, for this process is to get San Jose back to the place where it deserves to be. That is, fighting for cups and winning titles, which is the most beautiful thing that can happen to a club and the players.”