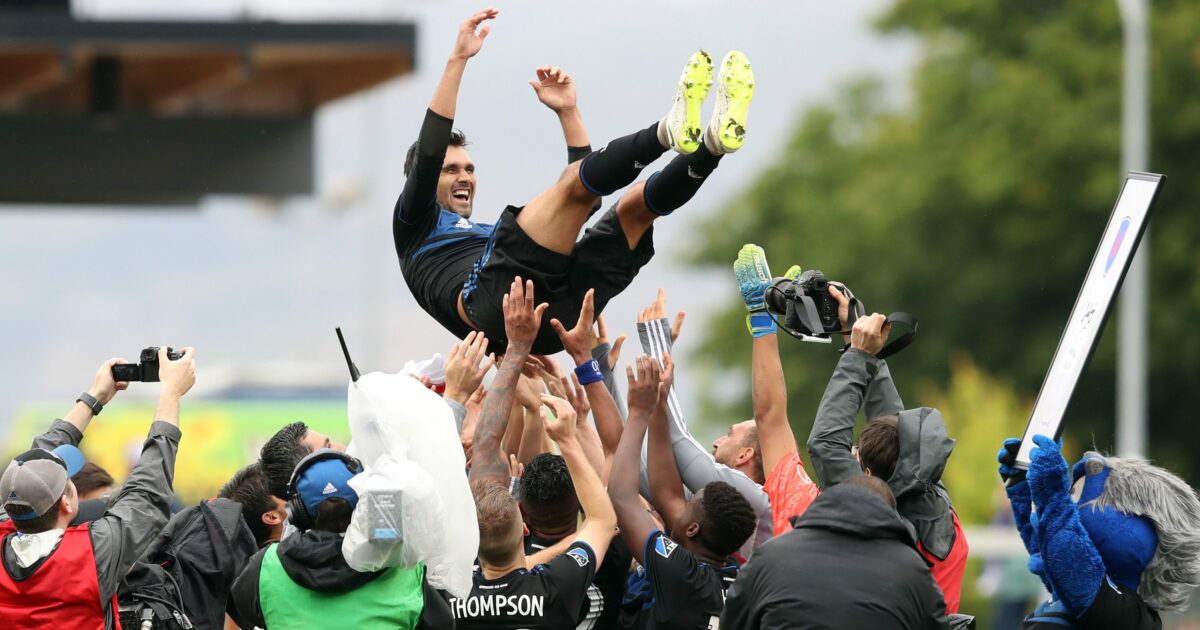 He can still visualize saying in an interview in his rookie year in 2005 that he’d be happy just getting 148 minutes on the pitch. He can also still perfectly visualize his first career goal in 2006 – a tap in goal at the far post against the Chicago Fire.

But there was no way he could’ve visualized what would happen over the next decade-and-a-half and no way he’d visualize taking the all-time goal-scoring throne from Landon Donovan.

Yet, despite not knowing the type of record-breaking day he was going to have in the Earthquakes 4-1 win over the Chicago Fire on Saturday, he knew that Saturday could be the day.

“It was fun,” Wondolowski said. “I didn’t necessarily think four goals coming in, but driving I had a special feeling. I really thought today it could’ve been the day.”

Wondolowski needed just two goals entering Saturday’s match against the Fire to break Donovan’s record, and in his first start since the end of March, he got both of the goals he needed, and two more to top it off for his first career four-goal match.

And now, after not talking about the record so much in detail last year, if at all, the 36-year-old Earthquakes captain can finally breathe, now as Major League Soccer’s all-time leading goal-scorer.

“I haven’t been able to elaborate on it, I tried to push to the side because I love playing,” Wondolowski explained. “To get it on a win, just to play like we did today. I felt we connected a lot of passes and created a lot of opportunities.”

“Being able to find myself at the end of some of those, it’s amazing. It is a relief now, not going to lie. It’s just nice to have it done.”

Wondolowski stayed true to his goal-scoring style as well. Goals 145, 146, and 148 were no different than goal No. 1 – a tap-in at the post. Goal 147 actually came in stride, sort of, as Wondolowski fired a shot on the first touch after Cristian Espinoza was fouled running in on goal on a counter.

The record-breaker came just minutes into the second half. Nick Lima fired a cross into the box in the 48th minute, and Fire goalkeeper David Ousted dropped it right in front of his line. Wondolowski rushed in and tapped in the point-blank shot to put San Jose up 2-0 and, in turn, break the record.

“You know, I always pictured hitting a 30-yard blast going upper-90,” he explained about the record-breaker. “Really didn’t picture the goalkeeper dropping it and tapping it in, but you know I’ll take it.

“I’ve probably crashed in on every shot like that probably 1000 times and 999 times he catches it and holds it. This one time I saw it come to the ground and was able just to get a toe on it.”

“I mean, it’s a perfect way to break the record,” teammate Shea Salinas said after the match, in which he had the assist on Wondolowski’s record-tying goal, said. “He’s so vigilant around the box. He’s always looking for that opportunity to score and goal and that one was just perfect. The ball falls right where he needs to be and he pokes it in.”

There was no question in the locker room that Wondolowski would break the record this season, needing just two goals with 34 matches to do so.

But for him to score four, especially after not starting and playing very few minutes while benched, was the surprising part.

“I think that the beginning of the season it was inevitable,” Salinas explained. “Wondo will have his 10 goals this season, so for us, it was inevitable. It was fun, but I didn’t expect (four goals).”

After the game, the Earthquakes played a video on the scoreboard that was a montage of Bay Area sports legends along with former and current Quakes teammates congratulating Wondlowski on breaking the record, led off by Landon Donovan.

“It’s still so surreal that I get a message from Landon Donovan,” Wondolowski said. “That he even knows my name is still crazy and boggles my mind. I got some messages after the game on the video board and that those guys know my name and are talking to me and congratulating me, it’s amazing. It’s still surreal and still hasn’t sunken in and I’m not sure when it will or if it ever will.”

Funny enough, if there was anyone who was certain that Wondolowski would score four in his first start in over a month, it was Almeyda, who also went on to compare his goal-scoring highlight reel to Wondolowski’s.

“I can’t say because it’s going to seem odd to you guys,” Almeyda explained. “I was speaking to my interpreter and one of the staff, and I said, ‘Maybe he’ll score four goals today.’

“When I watch my videos, they are six or seven minutes long because I scored maybe seven or eight goals in my career.

“When Wondo is my age, he’ll be able to sit down for an hour and a half to watch his goals.”