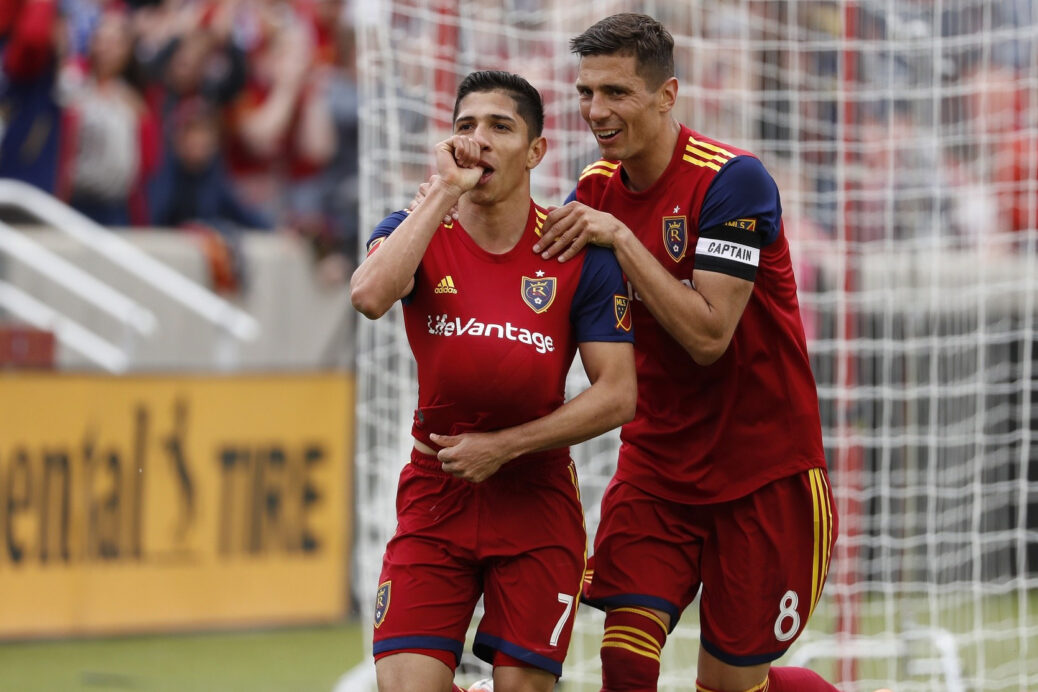 Matchday 12 in Major League Soccer got off to a bang with Real Salt Lake earning the result of the day.

Mike Petke’s side downed Toronto FC 3-0 at home as they earned their third shutout win of the season. Three different players registered goals in the triumph.

Stefan Frei made six saves for the Seattle Sounders to help the Western Conference club to a point in Philadelphia.

Elsewhere, Chris Wondolowski made history scoring four goals in a lopsided win for the San Jose Earthquakes. The Montreal Impact and New England Revolution played out a scoreless draw in Canada, while the Houston Dynamo downed D.C. United.

A pair of Eastern Conference sides met at Stade Saputo with both leaving with a point apiece.

The Montreal Impact was getting the better of the chances early, as Maximiliano Urriti nearly broke the deadlock in the 16th minute, but pulled the ball wide.

Urriti again in the 33rd, this time tricking Revs’ goalkeeper Matt Turner off his line, chipping the ball past him, but Jalil Anibaba bravely caught up and cleared the ball as it approached the line.

Star midfielder Ignacio Piatti returned to the pitch in the second half for the Impact, as both teams had to grind to a nil-nil draw. The point was good to place Montreal in third place in the Eastern Conference standings.

The Revs continued their unbeaten streak since relieving Brad Friedel of his duties, moving to 11th in the East.

The hosts scored a pair in the opening-half, to hold a comfortable advantage at halftime. Damir Kreilach’s opener came in the 14th minute as the midfielder slid a shot past Quentin Westberg.

Sebastian Saucedo extended the lead in the 28th minute, beating Westberg from long-range. It was the American’s first goal of 2019.

Saucedo would set up RSL’s final goal of the match, assisting on Jefferson Savarino’s finish in the 60th minute. TFC’s day got worse as Alex Pozuelo was sent off a minute later for a foul on Saucedo.

RSL sits in sixth place after the win while TFC are sixth in the East.

It was a record-breaking day for Chris Wondolowski as he is now Major League Soccer’s All-Time leading goalscorer after scoring four goals in a 4-1 triumph.

The striker’s first goal came in the 21st minute as he slotted home from close-range. It was Wondolowski’s first goal of the season.

San Jose extended their advantage after halftime as Wondolowski bagged his second of the match. It came via a corner kick as he beat David Ousted for the second time at Avaya Stadium.

His record-breaking goal was roofed into the top-left corner before he celebrated his fourth goal of the match just two minutes later.

The points were shared at Talen Energy Stadium with the Seattle Sounders earning their seventh point over an eight-day span.

Frei denied Brenden Aaronson in the first-half before keeping Kacper Przybylko out from close-range. His best moment came in the second-half when the Swiss keeper pushed Haris Medunjanin’s free kick over the bar.

The Union jumped back to first place in the Eastern Conference but will feel frustrated they didn’t earn a full three points at home.

Minnesota United earned their first win of May thanks to a second-half goal from Ethan Finlay.

The Loons took advantage of a corner kick in the 70th minute to score the lone goal of the match.

Brent Kallman’s headed pass found Finlay who rifled an attempt past Jon Kempin for his first goal since March 2018.

Columbus struggled in front of goal, failing to record a single shot on net.

Adrian Heath’s side moves to fifth in the West while Columbus are down to seventh in the East.

Derek Cornelius’ first MLS goal helped Marc Dos Santos side to a point in Kansas City. The Canadian rifled a left-footed shot into the bottom-right corner to steal a point for the visitors.

Krisztian Nemeth’s seventh goal of the campaign put SKC ahead after 37 minutes but the Hungarian would be sent off after halftime. Nemeth was shown a straight red card for a foul against Felipe in the 51st minute.

Maxime Crepeau made six saves on the road which helped the Canadian club return home with a point.

Wilmer Cabrera’s men made it four points in a week after a 2-1 home success over D.C. United.

After a scoreless first-half, Wayne Rooney put the Black and Red in front with a close-range finish.

The Dynamo kept their heads up and battled back with two goals in two minutes to steal three points. Memo Rodriguez beat Bill Hamid from long-range before Tommy McNamara scored his first goal for the team a minute later.

Paul Arriola was sent off late for D.C. to add to the visitors troubles on the evening.