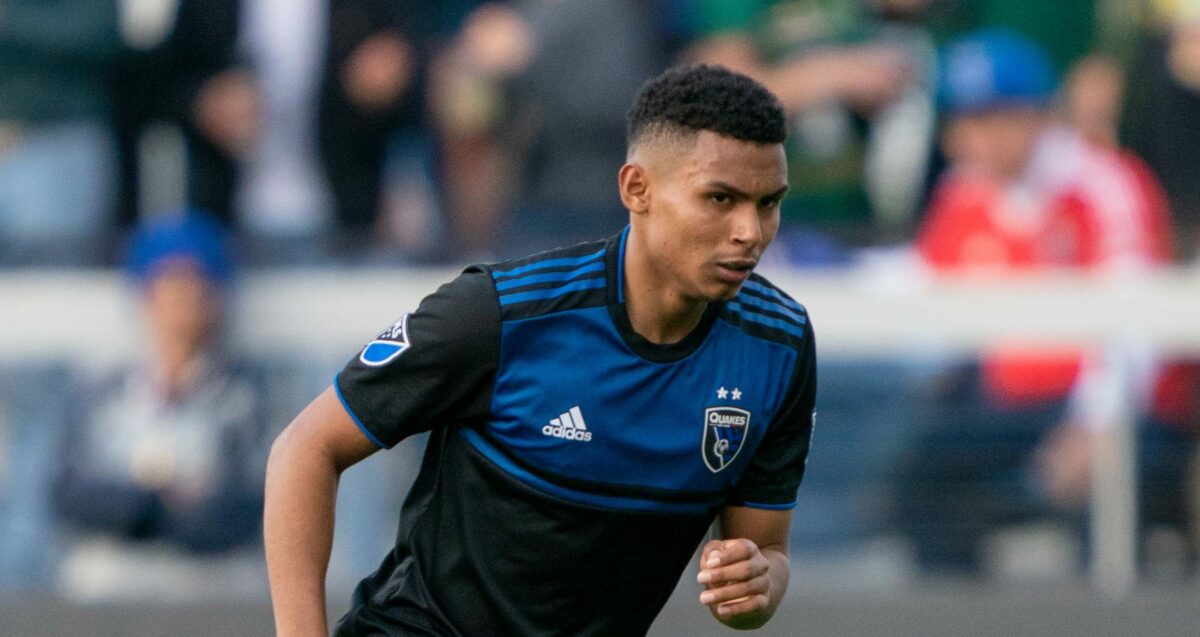 When the San Jose Earthquakes landed Marcos Lopez this past winter, the team made it clear that it viewed him as a left back. Lopez had been used successfully as a winger prior to that on his title-winning club in Peru, but the Earthquakes projected the teenager’s long-term future in defense.

He has not played much there, however, especially in the last month.

The start of Lopez’s MLS stint with the Earthquakes has been far from perfect and surely not as he had planned. The 19-year-old Peruvian has not been a regular contributor for the club, let alone an every-game starter, and has not seen the field for the Earthquakes in their last five matches, a stretch the spans over a month.

Part of the reason for that has been a recent knee injury and a red card received in his last appearance on April 13, but another is likely because he has yet to develop a full understanding of the ins and outs of playing left back.

“He’s very young so he’s continuing to learn the game and I think that’s very important,” Earthquakes forward Chris Wondolowski told SBI last month. “I think he’s doing a good job of that … I think he’s always kind of been more of an offensive kind of guy, more of a winger, and playing at left back, I think that he’s still, like we all, learning the job.

“I think he’s continuing to do that and he has the ability to grow as well.”

Lopez is still in the fledgling stages of his career, and, as can be the case with younger players, his best position may still yet be determined. If it were up to him, though, he would play left back because he sees and feels the game differently there.

Yes, he enjoyed being deployed on the wing with Peruvian side Sporting Cristal en route to a league title in 2018 and liked having the chance to more regularly score goals and dish out assists. Still, he feels more comfortable playing in defense.

“It’s the position I’ve always enjoyed playing,” Lopez told SBI in March. “Last year at Cristal, I played as a (wide) midfielder for six months, which I had to adapt to because I had not played in that spot for a while. Honestly, I’m comfortable at left back because it’s my natural position and the one I’ve always said I like to play.

“I think up until now I’ve been doing it well, but there are things to improve upon and do better, which is clear to me.”

The 5-foot-9 Lopez may need to make large strides in his game in order to return to the field and build on his five appearances to date, but just being in MLS has been a step up for him as far as he is concerned. Not only has he been exposed to another level of soccer, but he has also had the chance to play for and work with a head coach like Matias Almeyda that is widely respected in South America.

All of that was so enticing to Lopez this past winter that he elected to trigger the release clause in his deal with Cristal, which reportedly was not happy with his decision, in order to join the Earthquakes. He even passed up the chance to play in the Copa Libertadores, South America’s equivalent to the UEFA Champions League.

“When you’re young and thinking about playing for a team in Peru, you say, ‘Hopefully, I have the chance to get to the first division and the chance to play Libertadores,'” said Lopez. “You always watch Libertadores when you’re young, but in this case I chose to keep growing and improving. I think this league is very important for the jump I want to make.”

“I consider the level here to be stronger, and I say that without disparaging the league where I played and where I’m from,” added Lopez. “…I took the decision because I want to keep growing personally and I have objectives and goals and I think this is an important step for where I want to be.”

Where Lopez eventually wants to be is in Europe. It has been a goal of his ever since he decided he wanted to play professionally to sign with a team across the pond, and he would like to accomplish that goal at some point in his career.

For now, Lopez is focused simply on trying to perform well with the Earthquakes for two primary reasons. He wants the club to earn a playoff spot this year, and is also hoping that his performances can help him land a spot on Peru’s roster for the Copa America next month in Brazil.

Having just made his international debut last September, Lopez is still a newcomer on the international scene and his place on the squad is far from guaranteed.

“It’s bliss to be part of the national team,” said Lopez. “It’s satisfactory to know you’re doing things well and you have the possibility to represent your country. I feel like I have a chance to be part of the group for the Copa America, but this is step by step. You have to train well and during the weekends work as a team so things can go well for you individually.”

They are not going well for him currently. Lopez right now is on the outside looking in as far as the Earthquakes’ lineup goes, and he will likely have to make significant defensive improvements if he is to find a way to break back in and make the type of impact that he seeks.

“I look to keep growing, like I’ve always said, and to keep improving,” said Lopez. “I want achieve important things with the Earthquakes because you come here to be a winner. You don’t come here to be just another player or to just pass the time.

“I want to, firstly, get to the playoffs and step by step do well in the regular season.”