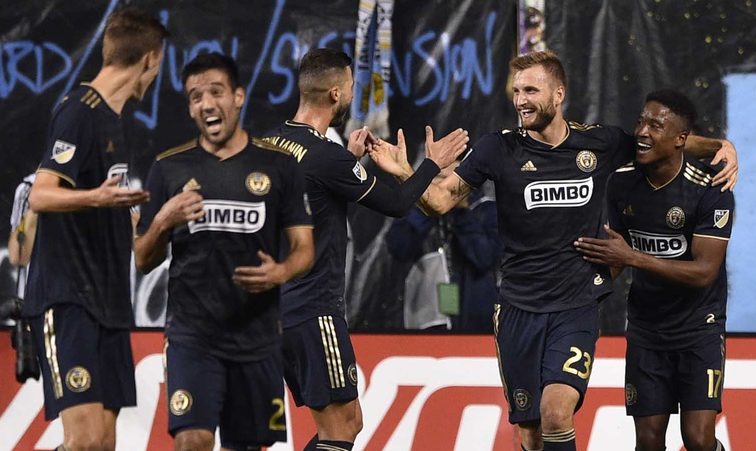 The Philadelphia Union were frustrated after 45 minutes of soccer on Saturday night at Talen Energy Stadium. They were tied with the last place team in the Eastern Conference, and once again not playing their best in an opening half of a match.

In the final 45 minutes, the Union buckled down, scored five goals, and hit the 20-point mark by May 5th at the fastest-stage of the season in club history. It was the first time the Union scored six goals since October 2017 which saw Sergio Santos’ brace headline the onslaught after halftime.

“A really disappointing start to the game, not our best first half. Credit to New England [Revolution], they came out and made us really uncomfortable and should have punished us two or three times,” Union head coach Jim Curtin said. “I give credit to Carlos [Miguel Coronel] in the big [double] save that he had early. That then led to our first goal, but again we were a little bit loose in our defending. Guys kind of were playing out of position and running all over the place, it didn’t look like us.”

“We got in at half time, we had a talk that we could do better and the guys really responded, in particular Ilsinho getting the goal right out of half-time. I think that turned the whole game and made them have to change a little bit, but they present a lot of problems for us with almost four guys up top being very direct, fighting for second balls, but overall a good win for us at the end of the day. It’s good to get some guys going and can’t say enough about this group that’s now had a lot of adversity in some ways on the field and some ways behind the scenes.”

Saturday marked the end of a busy week for the Union, as they played their third match in seven days. Curtin opted to go with a full strength lineup instead of rotation and early it didn’t seem like it was going to pay off. The Revolution pressured the Union and had the better of the offensive chances in the first-half.

Ilsinho’s introduction proved to once again play a major part in the match, like the Brazilian has done several times this season. His second goal of the season swung the match in the Union’s favor before they continued to hit back at the Revs.

“It’s a group that knows now [about being frustrated at halftime], so again the work that Haris [Medunjanin] has done for this team, to play three games, 90 minutes and dominate them in a week, Ale [Bedoya] same thing,” Curtin said. “So the veterans have their finger on the pulse of things, they know when it’s not us, and that first half is not us, we were lucky to have it only be 1-1, and have a good response in at half time starting with Ilsinho making that play and then a lot of our forwards coming to life and doing what they do best.”

Cory Burke’s long-term absence for the Union meant other forwards will have to chip in goals. Sergio Santos came off the bench and did just that with goals separated by five minutes apart. It was the Brazilian’s first two goals in MLS and he easily could’ve had a few more not for Cody Cropper standing tall in between the posts.

“Yeah he should have had five goals honestly,” Curtin said. “He has the quality to score and be dangerous. You could see his movement in the box, how dynamic he is. He has that knack for when balls are bouncing in and around there, his movement, it’s powerful, it’s fast. He’s good at getting to the near post and he got some good successes from that, got some tap ins.”

Kacper Pryzbylko scored in his third consecutive match while David Accam also netted his fourth goal of the season before stoppage time. The Union put 15 shots on goal, breaking a new club record which was originally set in the club’s inaugural season in 2010. It was a strong ending to a dominant week by the Union who continue to be force in the Eastern Conference.

“It was a great night for me, great excitement, I was able to score a goal and was able to do it in front of my daughter,” Santos said. “I had a little bit of a tough road so far, couple of injuries, then I got a game with the steel and I was able to score and then I had another injury all over again. So, it was just great to get out there and score a goal, I got to improve physically still but I’m ready to keep going.”

Now unbeaten in their last four matches, the Union will travel to Toronto FC next weekend, a club that handed them a 3-1 loss back on Opening Day. The Union will be full of confidence to knock off their Canadian opponents, who have not suffered defeat to Philadelphia since 2014.

Following that, their 5-0-1 home record will be tested with three consecutive home matches against Seattle, Portland, and Colorado to close out the month.