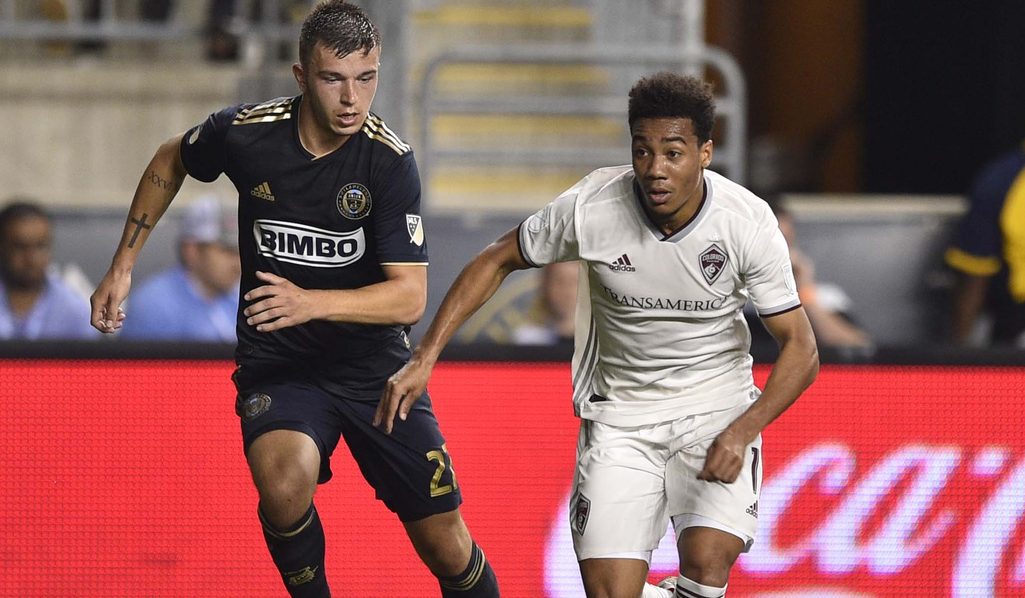 CHESTER, Pa. — Jonathan Lewis’ arrival with the Colorado Rapids has paid off in big dividends. Not only for the 21-year-old but for the Western Conference club who continues to push its way up the table.

Lewis did what he’s been able to do best with his new club on Wednesday night. He came off the bench at Talen Energy Stadium and scored for the second-consecutive match. His half-volley in the second-half helped the Rapids to a 1-1 draw with the Philadelphia Union, a team 16 points higher than them in the standings.

“I told them at halftime to keep going,” Rapids interim head coach Conor Casey said. “I thought we had a good first-half, we were unlucky on the goal. We came out in the second-half and as the game wore in, we made some adjustments to counter their abilities. Johnny [Lewis] came on and scored, good for him, he’s been a real spark for us. It’s a good point for us.”

“I’ve told him [Jonathan] to just use his instincts, he’s a good, smart player,” Casey said. “We want to get him in spaces with the ball so he can do what he does. It’s up to him to come up with the opportunities and he’s been able to do that for us.”

In a match which saw starting goalkeeper Tim Howard and leading-scorer Kei Kamara out, the Rapids defended their tails off. They blocked 12 of the Union’s 26 efforts, Clint Irwin made six saves, and the Rapids continued to offer a chance on the counter against the hosts.

Nine minutes after coming onto the pitch, Lewis got made a darting run towards the back post and half-volleyed Andre Shinyashiki’s cross past Andre Blake. It was a confident finish by Lewis, who now has two goals for his new club. He now has more goals in four appearances with the Rapids than 20 appearances with NYCFC over two months in 2019 and the entire 2018 campaign.

“He’s special, he is able to come off the bench and make an impact,” Keegan Rosenberry said. “You’ve seen it over the last few weeks. He’s a talented kid. He can change the game with one moment and he’s been a big addition for us this season. We’re thankful to have him.”

The draw extended the Rapids current unbeaten run to three matches, a first since October 2018. Although they still sit on nine points through 14 matches, the team is riding a wave of momentum with wins over the L.A. Galaxy and Columbus Crew in recent weeks.

A two-game home stretch begins on Saturday at Dick’s Sporting Goods Park as Lewis and Co. take on FC Cincinnati, the last-place team in the East. Following that, they take on Minnesota United before concluding June with matches against the Vancouver Whitecaps and LAFC. After putting in a strong shift against the Union, Lewis knows the team still has another level to get to if they want to truly be successful.

“I think we came in and put in a good performance,” Lewis said. “We played against one of the toughest teams in MLS right now and we’re leaving with a point. We defended well, we had some chances and we got the goal to get a draw. I think we’re pleased at the end of the night.”

“We’re embracing an underdog mentality right now,” Lewis said. “We only will win games if we go out and outwork everybody. We have the talent but we aren’t a good team yet that’s the honest truth. We have the potential to be there but we just have to keep working at it. I think we’re finding our own but the work has to keep going forward.”