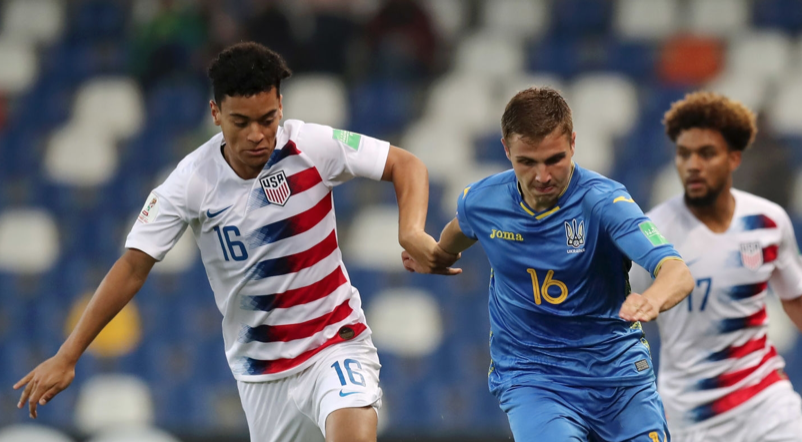 That rhetorical question is one used in Latin American soccer circles regarding teams that have lots of good press and buzz but little in the way of a proven record. It translates literally to, ‘Who have they beaten?’ and is something that fit perfectly with this U.S. Under-20 Men’s National Team before the World Cup started and now, most certainly, after.

The U.S. opened its U-20 World Cup campaign on Friday with a 2-1 loss vs. Ukraine. There was some good, some bad, and some ugly. Here are a few thoughts on the match:

POSSESSION GOOD, PENETRATION NOT SO MUCH

It was refreshing to see a U.S. team look so comfortable and smooth in keeping the ball on the ground and maintaining possession, especially against a non-CONCACAF opponent. Rather then hoof and hope or trying to hit on the counter like so many other U.S. teams of recent memory, the Americans were good, mostly in the first half, with maintaining long spells of possession. They knocked the ball around patiently to try to find an opening in the organized Ukrainian defense, never really forcing things and resetting when they had to. That calmness on the ball is what helped them finish the match with 67% possession.

Though the U.S. conceded first (more on that in a bit), the equalizer was born out of the type of impressively quick interplay that we have rarely ever seen from an American side. Sergino Dest found Brandon Servania, who played to Paxton Pomykal, who returned the ball to Dest, who passed a bit too wide for Tim Weah but close enough that he could still unleash a low cross back to Servania.

Brandon Servania picks up his first goal of the FIFA U-20 World Cup and levels the score. pic.twitter.com/rdQicMCvvb

While the 32nd-minute goal was certainly a sight to behold, moments like that were too few and far between. For all the possession the Americans had, they failed to penetrate the compact and physical Ukrainian defense once they got into the final third. Most of the rest of the U.S.’s best scoring chances on the day came from shots from distance from Alex Mendez, and that simple is not good enough when you have the ball as much as the Americans did.

The U.S. should have mixed things up a bit in the second half, which it tried by pushing Weah out wide, but just did not seem to have many ideas for how to create space or pass through the lines. Instead, they tried to force it down the wings over and over again in an attempt to work from the outside back in. The Ukrainians figured that out after conceding the equalizer, though, and refused to be beaten like that again.

Most American teams in recent memory have not been great handlers of the ball, but they have been fairly tough defensively. Friday’s group was not that.

Both goals the Americans conceded came a bit too easily. The first occurred when Heorhiy Tsitaishvili recognized the positional advantage Serhiy Buletsa had over Dest, who failed to stay goal-side of the Ukrainian winger. Buletsa then unleashed a ridiculously accurate pass, and Dest doubled down on his initial mistake by trying to win the ball aerially instead of positionally. His poor decision allowed Buletsa to use his body to allow the ball to bounce forward before finishing to the near post.

The second, and decisive, tally also came off a pinpoint ball, though this time it was Buletsa providing the service instead of finishing it. He whipped in a good cross with some real zing behind it from the left corner and placed it just outside the six-yard box, the sweet spot for a team attacking a corner kick because of how difficult it is for a goalkeeper to come out that far.

The play needed to be resolved by some solid marking, but centerback Chris Richards shut off, even if only for a second, as he was trailing Denys Popov on the entire play. Making matters worse, Richards then failed to make any contact with Popov when leaping to contest the header, allowing the Ukrainian to direct his header on frame with ease. If you are going to lose an aerial battle, and you will, you at least have to make the opponent uncomfortable so as to try and throw him off. Richards did not.

USA U-20s go back down a goal after shoddy marking on the corner. 2-1 Ukraine

If the U.S. is to avoid a short run at this World Cup, costly mistakes like these cannot happen again.

Head coach Tab Ramos talked two weeks ago about how he saw Weah’s long-term future as a winger, but he also mentioned that he was intrigued enough by the youngster’s qualities to want to use him as a striker with this U-20 side.

That is exactly what Ramos did to start this match, much to Weah’s and the Americans’ detriments. Because of his lack movement and feel for the game as a No. 9, Weah never really found the game up top nor did he get the ball in dangerous central positions during the opening 45 minutes. It is not a coincidence that his biggest play came when he made a run out wide and crossed the ball in to assist on the U.S. equalizer.

Ramos seemed to recognize that and moved Weah out to the wing in the 4-3-3 formation to start the second half, but the speedy attacker did not fare much better there. Weah was invisible for much of the second stanza, looking out of sync with his teammates and repeatedly trying to go it alone, only to get the ball taken from him by the swarming Ukrainians.

It is true that Weah has not been with this group before and that he is learning how these new teammates like to play on the fly. That said, Weah has more experience than the rest of the group and he needs to use that to find a way to make more of an impact in the attacking end.