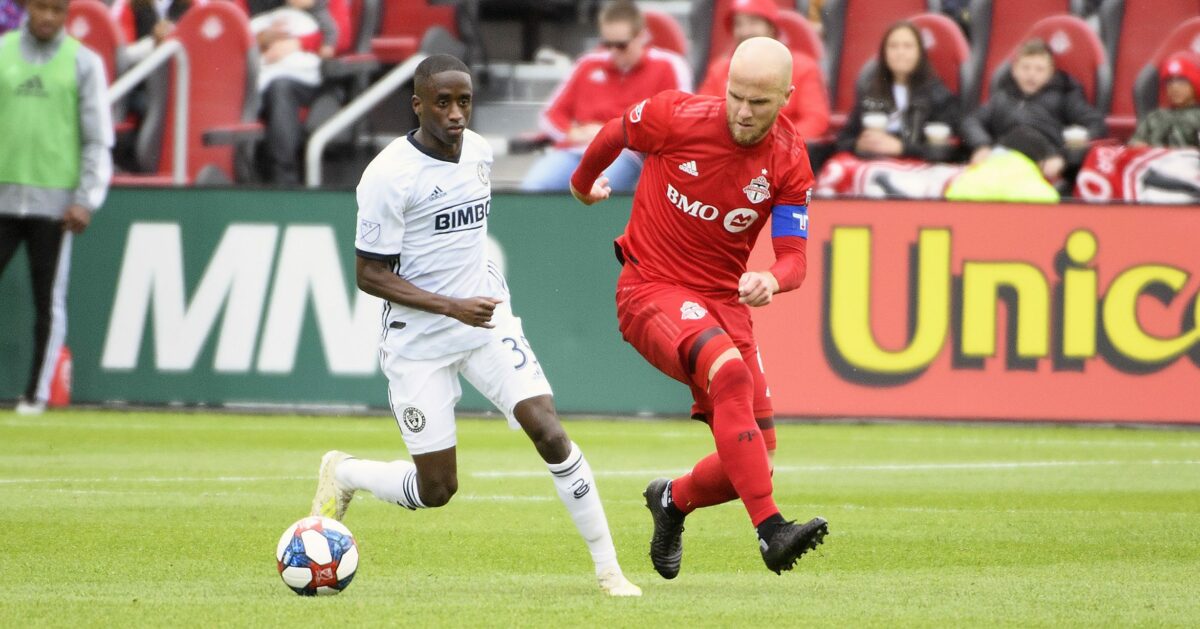 The Philadelphia Union had to wait five years to celebrate their first win over Toronto FC away from home. For Jim Curtin’s side it couldn’t have come at a better time, extending their unbeaten run to five matches, and continuing their hold on the top spot in the Eastern Conference.

For the fourth time in his last five appearances, midfielder Jamiro Monteiro registered a point. For the first time in his MLS career, Monteiro got to celebrate a game-winning goal that came off of his foot. His second-half strike sealed three points for the Union who have now won three straight.

“Overall it was a really special win for the group. This team has now answered a lot of questions,” Curtin said. “You know initially the challenge was to get above the red line then it was to push for 1st place and stay in first place and today the challenge was against the top team in the East in their building and what would we look like. Every player to a man stepped up in a big way.”

“I think you’re starting to see the quality of Jamiro Monteiro and his ability to get around the field and make plays for us. Haris again was excellent and I though overall as a team we made it very difficult on Toronto. Again, it’s a hard place to come and get points. So still things we can work on, but at the same time a special win and you can feel the energy from the guys afterwards in the locker room.”

It was just over two months ago that Toronto FC handed the Union a 3-1 opening day loss at Talen Energy Stadium, their fourth consecutive defeat to the Canadian club. Since then, the Union have put together a 7-2-2 record which has boosted them to first place in the East.

They’ve used the depth of their roster which has seen 11 different players score a goal, the most so far by any MLS team this season. They’ve overcome injuries to goalkeepers Andre Blake and Matt Freese, defender Mark McKenzie, and midfielder Marco Fabian. Even with new players stepping in, the Union have backed down to nobody which is something different than in past teams.

“We’re brave no matter who steps on the field for us. Happy with how we performed, it’s still early in the season but I think this team has shown now at least to the outside. We know we had something special in the locker room but now I think people are taking notice that it’s a team that can play with anybody in our league.”

Forward Kacper Przybylko assisted on the game-winning goal, which has now seen him register a point in four-straight matches. The German striker has taken advantage of Cory Burke’s absence due to visa issues, by giving Curtin a physical body to put up top. The 26-year-old has three goals in five MLS appearances and continues to help in the team’s build-up play, an added bonus.

“It shows the attitude that we can fight like a team,” Przybylko said. “It was a good team performance and like last week’s game today was a big fight and it was a positive. We wanted to prove that we also can play against a good team and Toronto is a good team. It was a good fight for us, and we were able to earn the three points and I’m happy.”

Monteiro’s versatility in midfield has also come up huge for the Union. He’s been able to advance upfield and provide another option in attack, while defensively he can shut down opponents main attacking midfielders. The 25-year-old made his eight straight start on Saturday, and it doesn’t look like he will relinquish that spot anytime soon.

“This is good for us also for the trust,” Monteiro said. “I think we need to continue in what we’re doing as next week’s another challenge, so we need to keep going like this. The mindset is the same like in the first minute because we want to win, we want to spoil also so you need to keep believing in yourselves and go for another goal. Even if they score, we’d need to score again. You just need to keep moving and do our best to make some goals.”

The Union return home for a three-match homestand beginning May 18th against the Seattle Sounders.